What will Biden's American Jobs Plan mean for the I-5 bridge project?

Hmm. Will Biden’s American Jobs Plan make a new cash grab for another CDC boondoggle? Or will it require more prudent and inclusive plans meant to address all transportation systems for all road users and travelers?

Budget graphic from the Washington Post article on the plan. 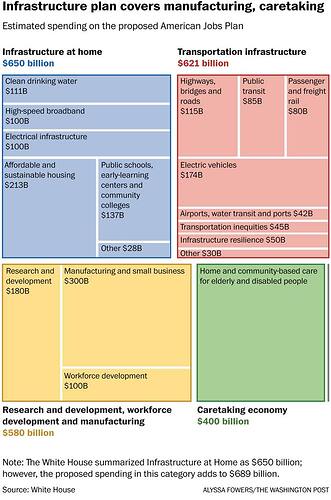 Some text direct from the Biden PR linked above:

The President’s plan will modernize 20,000 miles of highways, roads, and main-streets. It will fix the ten most economically significant bridges in the country in need of reconstruction. It also will repair the worst 10,000 smaller bridges, providing critical linkages to communities. And, it will replace thousands of buses and rail cars, repair hundreds of stations, renew airports, and expand transit and rail into new communities.

No itemized list that I can find that identifies those 10 bridges. Further down the page:

Repair American roads and bridges.
One in five miles, or 173,000 total miles, of our highways and major roads are in poor condition, as well as 45,000 bridges. Delays caused by traffic congestion alone cost over $160 billion per year, …

“Forced?” Sounds more like creating a much-needed inflection point for people to look for alternatives. Death by pollution and vehicle collision won’t abate, nor even avoid increasing them if we keep making driving alone the easiest and cheapest option to keep doing it — and neither will it support any professed global warming abatement goals.

… The President is proposing a total increase of $115 billion to modernize the bridges, highways, roads, and main streets that are in most critical need of repair. This includes funding to improve air quality, limit greenhouse gas emissions, and reduce congestion. …

Unless “reduce congestion” means removing passenger cars from the road, the items on this list are not mutually compatible!

… His plan will modernize 20,000 miles of highways, roads, and main streets, not only “fixing them first” but “fixing them right,” with safety, resilience, and all users in mind. …

Again, this means that the numbers of SOV (electrified or not) and per-capita VMT must be reduced in the process for this to be true.

… It will fix the most economically significant large bridges in the country in need of reconstruction, …

I guess we’ll see if the Biden Administration considers the Interstate Bridge as important as more locally-based politicians keep telling us it is.

… and it will repair the worst 10,000 smaller bridges, including bridges that provide critical connections to rural and tribal communities. …

Sounds like he’s either throwing a bone or feel-good soundbite – to both conservatives and liberals.

… The plan includes $20 billion to improve road safety for all users, including increases to existing safety programs and a new Safe Streets for All program to fund state and local “vision zero” plans and other improvements to reduce crashes and fatalities, especially for cyclists and pedestrians.

Sounds great. Exactly how will this be executed, measured, and guaranteed? Because if his vision is as toothless as the recently dismantled PBOT “vision zero” plan, it will have about as little success in achieving those lip-service goals.

Hopefully someone can convince Biden or Mayor Pete that variable price tolling combined with transit improvements are a better way to address congestion caused by SOVs than is building additional vehicle lanes.