What is this equipment on the Bryant St Bridge?

Hey, I was wondering if anyone could identify this equipment that was installed on the Bryant Street Bridge. There are these big catwalks and metal boxes that look like they open up, but they’re wrapped in plastic.

Anyone seen these things? 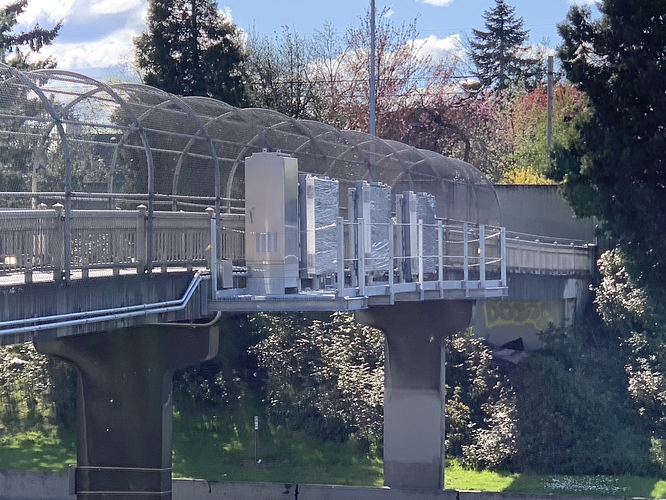 My best wild guess would be control boxes for some sort of of freeway displays about to go in on the opposite side of the bridge for drivers’ benefit.

These are ODOT’s new Advisory Speed Signs. As per a recent press release:

Not sure why they haven’t been turned on yet. Probably will be soon. Have a hunch the pandemic put a wrinkle in their plans and/or lowered priority for finishing this up.

Also, FWIW and IMO, whenever I see these type of projects from ODOT all I can think of is busy work. I mean, think about all the urgent crises and needs we have on the state system and ODOT is putting up special signs on their freeways to help remind people how fast they should go? The new message boards that tell folks how much time to various destinations are also similarly useless IMO.

ODOT is grappling with major budget shortfall right now and is supposed to be making major shifts in approach and strategy to save money. They keep saying they will divert focus and funding from low priority projects. I would hope and assume this type of thing is one of them.

Thanks, Jonathan. They’ve been there for a few months now, so I thought it was odd that they were just sitting there wrapped in plastic for so long.

And yeah, I wonder what these things cost. Huge amounts, I presume.

That’s exactly what I was guessing they were for. My guess was either going to be those VAS (didn’t know the name for them) or the “Travel times to…” info boards.

I also think these signs are a way to creatively spend money on drivers instead of riders.

Same with the signs that tell you how long until you get to the next major freeway junction. They provide no meaningful data and do not compel you to do anything. At best they encourage you to get off the freeway and drive fast on local streets to get around the traffic.

From my experience people aren’t obeying these advisory speed signs and continue to drive as fast as they feel is safe, which means about 65 MPH in a 55 until they get to the wall of 15 MPH traffic a mile ahead. Make the speeds mandatory and put some motorcycle cops out there to enforce it and then those signs will have some merit.

Not to mention, the vast majority of drivers are operating with a smartphone that has GPS info for more detailed travel info and ETA — both things that are always available instead of having to time one’s attention to the VAS signs or VMS signs in order to read them (i.e. take their attention off the road at ODOT’s suggestion). I’m especially annoyed by VMS signs that cycle through different messages. It causes everyone to slow down to make sure they’re reading all the “pages” and that causes backups. it also means people’s eyes are up in the sky longer than on the road ahead.

I also think these signs are a way to creatively spend money on drivers instead of riders.

absolutely. that’s another reason I am skeptical of these kind of expenditures.

The new message boards that tell folks how much time to various destinations are also similarly useless IMO.

These are all terribly unfair characterizations. They are not useless and aren’t replaced by a smartphone (that drivers shouldn’t be using anyway, remember). Undoubtedly the signs do represent money spent “on driving”, though.

The time-to-destination signs are generally placed just before points of decision. Travel times on I-5 vs 205 are posted just before drivers have to decide whether to take I-5 or 205, so the times inform the decision about which way to go, and in so doing balance traffic, improve throughput, and reduce delay and pollution. Or that’s the idea, anyway. I don’t have any studies on how well those goals are met, but ODOT probably does. They signs are providing real-time, decision-impacting information in a contextually-appropriate place. That’s pretty much the opposite of useless and meaningless.

Smartphones sometimes incorporate real-time traffic data into their route planning, but not always. When they do, from what I’ve seen, it’s only when turn-by-turn navigation is enabled, and commuters or those familiar with their route are less likely to be using that. Plus the distraction of using smart phones while driving is a consideration. If there’s a comparison to be made between the distraction impact of a traffic sign vs a phone, the greater impact seems obvious to me.

The speed advisory signs are another matter. They are unheeded by many drivers, but so, too, are mandatory speed limit signs. Again, I don’t have the studies, but warning drivers about what’s ahead beyond their vision ought to improve safety and reduce crashes. If ODOT is continuing to spend money on them, I take that as an indication that the previous expenditures have had a positive impact. Maybe I’m giving ODOT too much benefit of the doubt, but it’s no better to cast aspersions from an equally uninformed position.

Plus the distraction of using smart phones while driving is a consideration. If there’s a comparison to be made between the distraction impact of a traffic sign vs a phone, the greater impact seems obvious to me.

My phone is mounted on my dash, in-line with my view of road more than an overhead sign, as a nav device and only as a nav device. I use it for nothing else while driving — in accordance with one of the two approved uses for a phone while driving (well, and it broadcasts my podcasts to the radio for long road trips, but I get that going before I’m underway, and I don’t touch it). And I tend to always have turn-by-turn directions turned on (but with the voice prompt turned off if I’m in familiar lands) so I can see if any traffic is up ahead and/or if the navigation route changes.

So yeah, seems pretty obvious to me that I don’t glance at that info until I have a safe opportunity to do so, as opposed to trying to read three pages of a VMS sign cycling through a non-pithy message. I can’t count how many times I’ve never seen all the info on one of those digital signs because my full attention was needed on the road at the moments it was readable.

Point taken about the time-to-destination signs being before an interchange. Still, I’ve made my decision long before I’ve gotten there.