Slabtown **encampment** in the news

This artitcle in the Tribune today highlights an illegal encampment “famous for all the bikes”. Let’s check in with the proprietor of this booming business:

Kyle Ryan has been a resident since April 2021 on the block between Northwest Quimby and Pettygrove Street. What he calls his bike repair business has spilled into the street over the winter. Ryan said he was surprised by the action.

Surprised that the city is clearing a camp that is blocking a public right-of-way? Only in Portland.

He said his bicycle chop shop — he accepts bikes without asking if they are stolen, and fixes them up to sell and trade — had spread into the roadway, but hadn’t taken up the sidewalk.

Oh thank goodness! I’m sure everyone felt totally safe weaving through the piles of trash, glass and needles, getting within arm’s reach of the camp’s occupants, etc. /sarcasm

Ryan said, in the bike trade, name-brand frames are popular. Also BMX. “Nobody really uses the brakes … the wheels are the hardest part to keep. BMX is really popular right now. Everybody wants BMX 20-inch wheels with fat tires now.”

Here’s a guy knowingly selling stolen property on the street-- after he’s disguised it-- and the politicians and DA just look the other way, in deference to the “homelessness activists”. Sometimes I feel like we live in an alternate universe where up is down, wrong is right, etc. Is it any wonder that Portland’s livability is in the toilet?

A team leader with Rapid Response Bio-Clean, who did not wish his name to be used, explained that although many people at the bigger camp on the next block south were surprised by the call to move, his team allowed them time to sort and move their possessions. The material ranged from furniture to electronics to food to bottles of urine and buckets of feces.

I wonder how long it would be before I would be fined if I kept bottles of urine and buckets of feces sitting out on my front lawn next to the sidewalk?
Rules and laws are there for a reason and need to be applied to all, not just the few that it’s convenient to apply them to.
Edit: I think especially laws around health and safety should be enforced without fail and without any excuses. If Portland needs more public toilets, well then do it. If Portland needs “free garbage” days for low/no income folks, then do it. But to continue doing nothing, for the actual person camping on the street is unconscionable. And before those of you ask what have I done. Well I’ve had various homeless people stay in my home from a couple weeks on a couch to several years in a spare room.

As of 1/13 The huge chopshop around 94th and SE Glenwood on the I 205 trail…just south of Woodstock and north of the Springwater trail…has been cleaned out. It had been there for a very long time.

Another key quote from the article:

‘Ryan said he was looking to move to another camp under I-405, around Northwest 18th Avenue and Savier Street. He said he isn’t interested in a shelter or moving temporarily in with friends in an apartment. “I have too much stuff to bring to somebody’s house. It’s kind of a burden.”’

What are the imbeciles from the Office of Management and Finance doing? In Portland, you must have a permit to operate a second hands goods business. Housedness/unhousedness aside, this needs to be enforced.

Bicycles are specifically included in “regulated property”. Keep in mind that OMF is the a**holes that is behind sending the collection agency on “delinquent” Arts Tax to people’s OUT OF STATE addresses as well as running the 100% inept Homelessness/Urban Camping Impact Reduction Program which apparently exists to keep government staffer payroll going than anything else.

Yeah, the “oh they are homeless and we should let them do whatever they want” isn’t doing so well for the community at large is it.
Laws are for ALL people. It shouldn’t matter what their housing status is.

This post has been deleted. Chopwatch, I have talked to you about this before so please cut it out. - Jonathan

Embarrassing how long it takes for the city to act on these known chop shops. Enabling does not equal compassion.

There’s “Anderson agreement” but once the requirements of the agreement are satisfied, how close the city pushes the abatement to the fullest extent permissible within the agreement is up to the city’s discretion as far as I am aware. I don’t feel they’re aggressive enough.

HUCIRP is a freaking joke. In here, you will see that it is a program of the Office of Management and Finance and it identifies who the manager is. Check that manager’s background yourself. It might make you wonder why drug camps are so slow to be abated.

I disagree with the way you and most other folks on this thread are thinking about this article and the situation on the street.

Have any of you proven that all/most/some of the bikes in this guy’s possession are stolen? Given the fact that most homeless people rely on bikes for transportation, I think it’s totally reasonable to think that some folks in these camps act as mechanics and buyers/sellers of the bikes. How many bikes do you have in your garage or shed or backyard? I’ve got well over a dozen and if I had them out on the street everyone would assume I’m a criminal. That’s not cool.

Before you jump on me, realize I am not naive about what’s going on out there. I’ve had first-hand experience of theft from a camp and I helped form the PPB Bike Theft Task Force that recovered 100s of bikes from camps over the years.

That being said, you folks need to slow your roll a bit. I hate the situation as it stands now too with all these camps and the conditions they create on the streets, but just complaining about the trash and being disrespectful of the people who live there is an easy and f’d up thing to do imo. There are no easy answers to dealing with this in a way that is humane and I won’t support any inhumane response. So yes we are at something of a stalemate until remedies work their way through the system and we get the support we need to finally correct course.

Again, if we find stolen bikes in these camps, absolutely we need to deal with that. But assuming someone is a criminal without have any knowledge about their supposed crime is really f’d up and I have a limit to how much of that I’ll tolerate on this forum.

If you want to talk shit and disrespect people who live outside, go to FB or Nextdoor. Actually, just don’t do it at all because it’s selfish and doesn’t help move the issue forward.

the “oh they are homeless and we should let them do whatever they want” isn’t doing so well for the community at large is it.

Well I bet folks who live outside appreciate not being hassled and uprooted and swept all the time. Just because a person isn’t in your “community” doesn’t mean we can just toss them aside or that they aren’t actual part of OUR community. I agree our pendulum has swung too far to the “let them do whatever they want” side, but getting that balance right has to be done very carefully because these are human lives we are dealing with here.

who’s enabling? I celebrate when I can. I sure Gordon Smith would say the same.

I’ve got well over a dozen and if I had them out on the street everyone would assume I’m a criminal.

If you had your dozen bikes out on the street, they’d immediately be stolen and end up disassembled in some drug camp bike chop shop.

ok, but that has nothing to do with the point I’m making.

My point is that, legally the city sees people living on the street as having all the same rights and needs as people living in houses. That’s part a political stance but it also comports with Oregon Court rulings about not being able to sweep homeless people away if there aren’t enough places for them to live.

That goes for personal belongings that I’m able to store in my garage. If I lost my house and had my bikes with me on the street, I wouldn’t want people to look at me and assume I am a criminal.

Let’s not make this about appreciating/not appreciating. The anti-car zealots call out vehicle operators for numerous things. There are business regulations in place here. When one (housed or unhoused) operates a second-hand goods business enterprise whose merchandise includes regulated property and it comes to the attention of someone that it is not licensed, it is perfectly fine for them to be hassled for not being in compliance.

Legally, the law requires business operators to comply with applicable regulations regardless of the proprietor’s housing status.

This isn’t any different from expecting car drivers to operate a vehicle that is registered and have the required insurance.

Jonathan,
I respectfully think your attitude is part of the problem. We are confusing compassion with enabling.
Rulings do allow camping to be limited to certain areas and in fact prohibited if there is an offer of shelter. Allowing street/RV camping is inhumane. Not only to the unhoused but also to the housed. We have plenty of money to reduce the suffering, we just need pragmatic leaders and a will to do it. Unfortunately we encourage a libertarian “free for all” and it is not working.

Have any of you proven that all/most/some of the bikes in this guy’s possession are stolen? Given the fact that most homeless people rely on bikes for transportation, I think it’s totally reasonable to think that some folks in these camps act as mechanics and buyers/sellers of the bikes.

Jonathan, you seem like a very nice guy but I think you are being naive. No one really believes these bikes were properly purchased through legal means. To try to argue otherwise to me just shows a lack of awareness or an effort to push one’s ideology over reality. 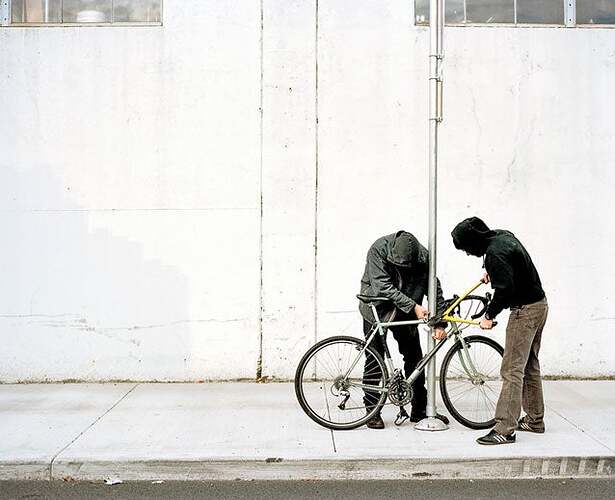 Who Pinched My Ride?

When thieves stole his beloved ­commuter bike on a busy street in broad daylight, PATRICK SYMMES snapped—and set out on a cross-­country plunge into the heart of ­America’s bike-crime underbelly. What he saw will ­rattle your frame.

What would you like to say about Kyle Ryan’s second hands dealer operating without business license?

Yep. Alongside “rights and needs,” seems like something such as “basic responsibilities” could be added.

JayDedd, “basic responsibilities” can’t be written into the law in a special section for the homeless. It already exists in the form of littering, loitering, trespassing, squatting, etc. Making a brand new law(s) specifically for “responsibilities to follow when living illegally on the street” would never get passed.