Okay, folks, the mayoral choice is clear, but who do we like for City Council? Chloe or Sam? Who is going to do the most for cycling in this city?

Sam Adams because he is going after the weakest candidate that people are mostly unhappy with. I could see him win just because people want to see Chloe Eudaly gone.

If the Rose Lane Project (dedicated bus lanes on a bunch of streets) actually happens, Eudaly will have done more for biking in Portland than Adams did as mayor. Not just because so many bikers also use the bus, or even because transit users tend to vote and spend money a lot like bike users, but also because dedicated bus lanes will also be … bike lanes.

As far as I know, Adams’ main contributions to biking as mayor were some good hires within PBOT and the neighborhood greenway system. Both of those were as much due to Adams’ chief of staff Tom Miller. As I understand it, Adams wasn’t a bike advocate until Miller (and Jonathan Maus, and the perception of a rising political tide of bikey voters!) convinced him to be. He’s a political animal, and in the 00s that self-interest was part of what made him bikey.

I’m less familiar with Adams’ contributions to biking when he was transportation commissioner.

Eudaly has got to be one of the least political animals on the council in a long time. She almost never seems to base decisions on their political popularity and has barely even run a reelection campaign. She’s never been a huge bike advocate in particular, but she’s one of the strongest transit advocates on council in a long time and comes to it from a justice perspective rather than an economic development perspective, which I personally think is a better approach to transit-driven economic development anyway.

but also because dedicated bus lanes will also be … bike lanes.

That’s not assumption I’d make. I’m concerned that the Rose Lanes will be just like some of our recent streetcar lanes - that is, they’ll make bicycling worse. Bike access is listed as a possible “tradeoff” on some of the Rose Lane materials FWIW. I’m hoping for the best, but tracking closely.

As for Adams vs. Eudaly, it’s such a fascinating choice!

Adams is ostensibly much more bike friendly, but your points about it all just being political are true to some extent. Just look at how Adams is campaigning now… For “Sam for Platinum” and the guy who many would say was the face of cycling in Portland for a few years, it’s notable to me that he never mentions bikes or cycling. He had already soured a bit on cycling in the tail end of his last tenure and now I think he feels like cycling is a political liability so he’s not embracing it like he could/should/would have.

In terms of transportation more broadly, I haven’t heard Adams share the clear vision about how to make things better that I would have expected from someone with his transpo bona fides.

All that said, I think Adams is a great politician and leader and he can bring a lot of people around a table and make everyone feel good and positive toward each other.

Eudaly is candid and I like that she’s not a slick politician. I sometimes also wish she were more like a politician! That is to say, IMO great politicians are good orators with charisma who can rally people with diverse opinions around them to achieve bit and great things. I’m not sure that’s Eudaly’s strong suit. Then again, I like leaders with principle who focus on things not because they poll well or sound safe, but because they’re the right things to do. I think Eudaly is that type of leader. I also really appreciate how she communicates so much with us online. That type of comfort with informal communication channels shows me she doesn’t have much to hide.

I wish Eudaly had more urgency on the transportation reform side of things. I don’t think she has made the connection about how mobility is so directly tied to the other economic/social justice issues she cares so deeply about. I know she build Rose Lanes with justice at the forefront, but I have not seen the acumen and urgency on mobility from her that I hoped. The comments she made during the open streets-Covid 19 discussions were really disappointing and I get the sense she still doesn’t fully embrace and prioritize and understand what the potential is for street reform at this moment in time.

OK I’ll stop now. Take the above with a grain of salt because I’m not nearly as plugged into City Hall as I used to be (which is a sign that cycling isn’t a huge priority in that building like it was back in the days of Adams).

(accidentally replied to myself! still learning the system)

Re bus lanes, does that mean you think:

Re politics: agree with everything you say here, though you obviously know way more about Adams and his time in office than I do.

Why would you pick either?

Seriously; he’s smart and he listens.

Easy to have no baggage if you’ve never been in a high-profile elected position.

Ugh, really? Anyone but one of those two. Personally I’m all in for Keith Wilson. He’s a daily bike commuter and owns a trucking company (with a top-notch safety record). Why not have someone with transportation experience running PBOT? Mingus Mapps would be worth a shot too in my eyes.

Sam Adams is a sexual predator. He left his job in DC under circumstances that no one is willing to discuss, and probably pulled rank to get out of a DUI charge while he was Portland’s mayor. That’s not someone that should be in our municipal government. Meanwhile, Chloe just seems like she’s out of her depth. All her proposals about rental regulation lead to less housing being built, and she doesn’t seem to understand the cause/effect there.

biking in them would be technically illegal?

No. Not illegal. That would be a political non-starter.

Yes. In some ways. You know all this comes down to space. Look at SW Madison dedicated bus lane and how the bike lane is squeezed. Now imagine a street with even less wiggle room. Given the politics around biking in City Hall these days I could see PBOT/Eudaly just saying “We can’t fit a bike lane here… But there’s a bikeway 2 streets over you can use. Sorry.”

they will be less comfortable/appealing to bike in than real bike lanes?

Yes. Transit vehicles are loud, smelly and very intimidating for most riders to be around.

they will be less comfortable/appealing to bike in than auto lanes?

No. I’d much rather share lane with a professional bus/MAX operator than a rando car driver any day!

I don’t think Mapps gets it. I have a really hard time looking past his “There can be too much density” comment, referring to the inconvenience of parking at 20th and Burnside. Seriously, that’s 20 blocks (wee little Portland blocks) from the city’s center! If that’s not the ideal place for increased density, then what is? I get the idea a lot of people just really like how little he reminds them of Eudaly.

yep, we agree on all points re bus lanes vs bike lanes, I think you’re just a little more idealistic than I am as usual. 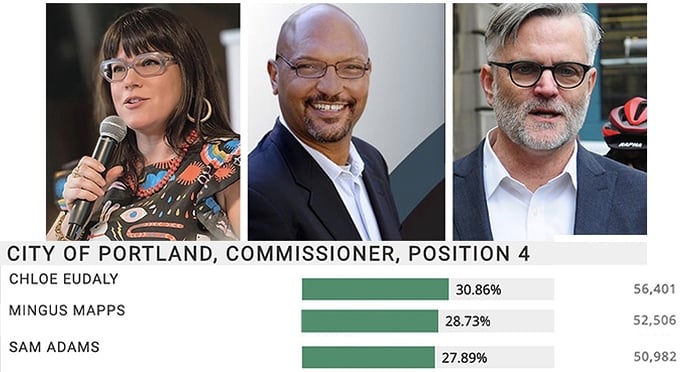 What I have been chewing on—absurdly trivial, I admit right upfront—is why Chloe lists her age as (born) 1969/70. I have never seen anyone do this, and can only imagine she was born at exactly midnight on December 31st and her parents thought it was cute to list it this way… Can anyone shed light on this?

Wikipedia has an exact date of birth, so probably not the midnight thing.

Thanks. Yeah I noticed that too - after posting… and felt foolish.

The other day all I found was the other version which seemed awfully strange.

I’d like to see Mingus and Sam in a run off.