What is the etiquette/rules about riding a bike in the bus only lanes where there is not a bike lane? I often ride through downtown and will sometimes ride in the bus/max only lanes on 5th and 6th to avoid cars. A few days ago I was riding in the bus/max lane on 6th and a bus driver got very mad - kept honking at me and when she caught up to me at a stop light opened her window and yelled something (the only thing I heard was “get out of my lane”).

I always figured bikes have as much right to use the lanes downtown as anyone, but maybe not? Am I in the wrong for riding in those lanes? What’s the rule?

Bus only lanes, mean just that bus only. All other forms of transportation must use car or bike lanes.
As you found some bus drivers are very militant about enforcing it with their horns.

Hi, Jackson,
That was debated when the transit mall was created many years ago… and yes, the end result was that people on bikes are supposed to use the car lane. (The right thing would’ve been to keep private cars off the mall entirely… and maybe include bike lanes.)
The city has not done a good job of explaining what’s okay where with the recent Rose Lanes. It’s especially confusing since some of the first new bus only lanes (e.g. SW Madison) included bike lanes. But my understanding is that unless there are markings about bikes, when it says BUS ONLY that means people on bikes are also supposed to stay out of the lane. That’s what I do when I’m riding on NW Everett east of the Park Blocks.
I tend to avoid 5th & 6th. The car lane often is backed up. Stay tuned for big improvements on Broadway and 4th. They are meant to be the prime north-south routes for biking. So soon you might not care about 5th or 6th.
Here are a couple of BikePortland articles: 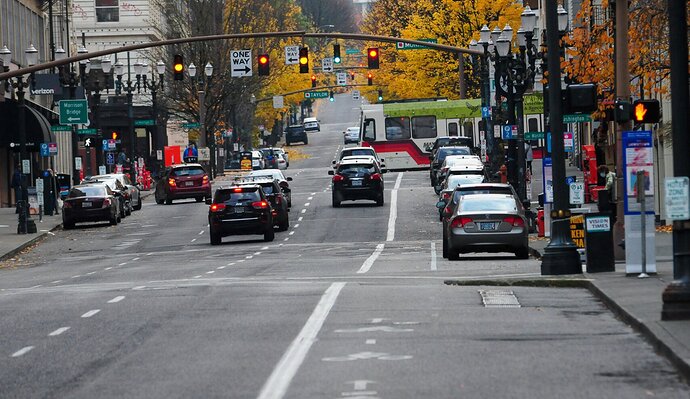 (SW Broadway looking north and south from Oak. One section is protected and wide, the other is neither.) When the Portland Bureau of Transportation installed our city’s first protected bike Read More » 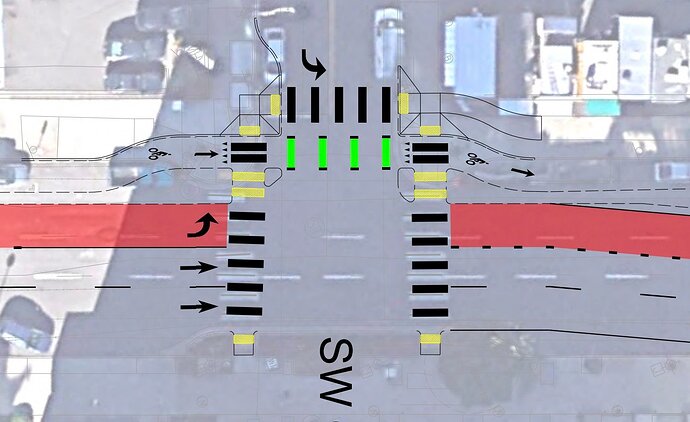 A street that currently has no dedicated space for cycling is poised to become one of the most important bikeways in Portland. New concept plans revealed last week by the Read More »

Good question and I feel your pain having to wait for car users on the “transit mall” on 5th and 6th.

I agree w others here that bike users should not take the bus lane on 5th / 6th. I think it’s ok to squeak by cars in the general lane if you are comfy but even that is questionable.

The bigger issue is of course that we need to get cars off the transit mall! Drivers have no business on there!

Other bus only lanes around town are fine for biking tho. I regularly use the MLK bus lane and others because it’s safer and it makes sense. IMO PBOT should have/should be more clear that bikes can use “bus only” lanes.

Thank you! I knew someone on here would know the answer.
Looking forward to seeing those changes on Broadway and 4th. I used to use 4th a lot more but it can be pretty scary on a bike. Those changes will be great.

Yeah I had used other bus lanes especially on the east side and that’s what made me think using them on 5th/6th was okay too. But I see why its different on 5th/6th.
It really would be great to get cars off the transit mall altogether. Would be a good first step in making some car free streets downtown.

Hi, Jonathan,
It’s news to me that people can ride bikes in the Bus Only lanes that don’t have bicycle markings. I just looked through the Rose Lane pages on the PBOT website… and can’t find any mention of bicycles except in the Alder project, which has bicycle markings… and is called a bus-and-bike lane on the Rose Lanes interactive map. That’s different than the red BUS ONLY markings on streets like NW Everett… which is called a bus-and-turn lane on the map.
The city clearly needs to do a better job of explaining how the various varieties of bus lanes are supposed to be used.

that’s because it’s a grey area. I’m sure PBOT knows bike riders are using the MLK/Grand bus lane even though it’s technically not supposed to be happening. But yes, this is another example of how PBOT’s lack of consistency when it comes to bike/transit markings causes problems.