It ain’t cheap but if you ever want to ride in a truly car free environment that’s as easy, hard, short, or long as you want, this may be the ticket for you

Now I’m wondering if there’s a way to carry it on a bike (driving it to water seems so wrong), or rig it to carry a bike. Be a human amphibian.

This could be done easily enough with a trailer. Somehow, I suspect the sort that springs for this won’t choose that option.

Boats and SUPs are more appropriate for water than bikes and the inflatable varieties can be strapped to your back.

All of these foils just below water surface look like they are going to fail at the first encounter with any seaweed or lake grass.

These people seem to be pushing pretty hard in these videos but how long can you keep that up with bare feet?

Pedal kayaks have been around for a while and that’s a much safer way to work your legs out on the water. Pedal kayaks, the recumbent version of the Manta5.

Yeah, I thought about that. The need to start in fairly deep water is a big deal.

In addition, there are a lot of hidden rocks in ocean environments and immersion protection as well as the PFD would make this pretty uncomfortable.

I’d still take one for a test spin given the chance.

That reminds me of the MIT bicycle hydrofoil project of the early ’90s. I think I saw it in Scientific American, and I vaguely recall a diamond bike frame but I don’t see that in this article that dredged up The Decavitator project:

It took very strong and light riders for it to plane, and ride durations were just a few minutes due to tremendous exertion. Average and large riders (me) could only dream of flying it. I’d jump at the chance to try an E version despite its lack of practicality.

Yes, this would definitely be a cool half hour rental experience on a lake or calm lagoon. But the high cost and chance of damage would probably make rental economics prohibitive. And unless you’re a bike nut, most people aren’t going to want to pedal that much. It would be competing against mid-higher priced jet skis.

Woman okay after car ends up in lake at Heartwell Park

A young mother was parking her car at Heartwell Park Monday and her son was already out of the vehicle when she decided to take a moment and straighten out her car. That's when she accidentally hit the gas. Her car jumped the curb and went into the... 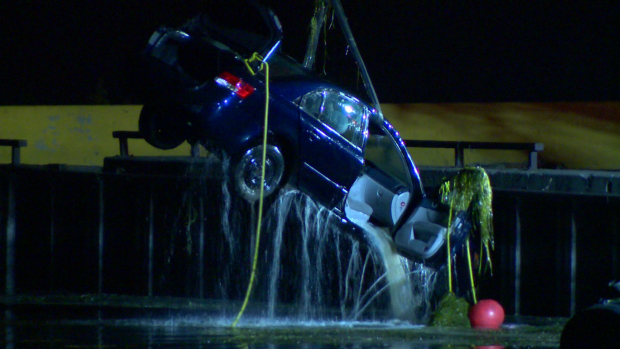 Police try to determine how a car drove into a lake in Montreal, leaving two...

Montreal police are still trying to determine how a car went into a lake off of the shores of a Montreal borough on Tuesday night, ending in the deaths of a young man and woman.

I’d prefer to spend $1,400 on this backpack pontoon: https://www.shuttlebike.com/en/

Although you probably don’t want to put an e-bike on that thing, it’s still a stretch to pay $7,300 just to waterproof the bicycle part of it and make it streamlined.

Toys for the rich. Time to check my lottery tickets.

I’d prefer to spend $1,400 on this backpack pontoon: https://www.shuttlebike.com/en/

The backpack pontoon is interesting, but I’m not sure I’d even want to test it except under duck pond conditions. It’s going to be unstable on anything but flat water, vulnerable to wind, power transfer looks really inefficient, and the pontoons are way too thin – hit a pokey thing hidden underwater and you’re in serious trouble (especially if you aren’t wearing a PFD and immersion protection).

On the water, boats work amazingly well. If you actually wanted to use a bike with a body of water in multimodal transport, the truly best way to do this would be to have an appropriate boat you could lock up somewhere and have a cheap bike at each end where going on foot wasn’t feasible.

I’m sure the price is way reasonable as it’s basically a paddle board with a pedal kayak system and a handlebar.