Let me start off by saying that I live adjacent to the 205 MUP; my home is not directly up against the path but it might as well be. It’s close enough that I utilized the 205 MUP for almost every ride I did, north, south or east of my place.

I’ve used it for daily commutes, to access Gateway Green, to bike camp at Milo McIver. I used to love cranking out a quick Springwater > Trolley Trail > 205 MUP when my legs needed a stretch. It’s also helped me lead several bike-curious friends out to Boring for a deeper exploration of our trail system.

And now that is gone. Our leaders have made it clear that the burdens of homelessness, drug abuse, vandalism, illegal dumping and environmental degradation will be borne not only by the working class communities along the path but also by the cyclists, walkers, joggers and light rail commuters.

This image was posted by a user on reddit today, it shows NE 105th near the Clark Rd underpass. It is not an outlier; this is merely one of many such abused places on the MUP. Yeah, that’s a full-sized moving van, sitting in a pile of trash and dumped appliances, in the middle of our “Platinum” bike infrastructure: 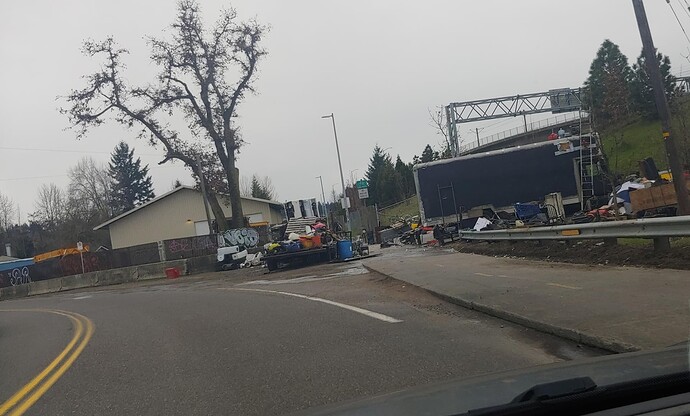 In 2021 I mostly stopped using the path. Even though it’s the sole car-free route in and out of my neighborhood, it is no longer safe. It is no longer pleasant, nor is it even passable, much of the time. Now when I think about going for a ride I purposely avoid using the MUP. Instead I weigh the crappy alternatives, like our discontinuous and incomplete Greenway network, trying to avoid PBOT’s admitted “difficult connections” at every major arterial. On numerous occasions, I considered the risk and hassle of trying to (for instance) snake through 87th & Powell at rush hour… and decided not to ride at all.

It’s a bummer. My mileage is down; so is my happiness. And I’m not the only one avoiding the 205 path. Witness the huge increase of cyclists riding parallel streets like 92nd. Even though it has high vehicle counts, high vehicle speeds, incomplete bike lane striping and poor lighting… people find it preferable to dealing with the out-of-control disaster in the 205 camps: hostile “campers”. Constant avoidance of glass and debris. Uncontrolled fires burning off and on the path. Unregistered, uninsured vehicles being driven on the path by unlicensed drivers, parking in greenspace. Stolen cars being stripped… just about everywhere.

We have lost the 205 path, at least from Marine Drive to the Clackamas County line. The city has deemed this outcome acceptable. Never again will I lead a ride of timid friends out to Boring if it involves a 205 connection (and the Portland parts of the Springwater aren’t much better). It’s an embarrassment and an outrage. Or at least it should be. We’re never getting this path back and I see nothing on the policy horizon that will change this.

Self-organized group cleanups like pdxremovebybike can only go so far when it comes to bike lane cleanup. In that photo provided, it looked like it would take several hundred dollars worth of equipment to haul that stuff out, maybe thousands. It should be the cities responsibility to come and clean up an area when asked, but sadly nothing is done no matter how many times you call. It’s become the new norm for Portland, and cyclists will have to combat it ourselves, physically, to keep this from spreading to other trails or overtaking ones currently in the process of being covered in junk. No one else is gonna be bothered to clean it but the people who use the trails.

I’d agree, it looks like the 205 is long past repair. I suppose the only way to get it cleaned even partly would be to contact a representative/senator of the senate the path is in, or advocate for it at some city meeting or something come springtime.

Until we vote ideologues (like Hardesty, Rubio, Ryan, Wheeler and DA Mike Schmidt) out of office and get more pragmatic centrist leaders nothing will change. Our current leaders are doing what they said they would and If you want a functional city we need to vote for change. Currently it’s all about enabling lawlessness in the name of “compassion” for your “neighbors”. Where is the compassion for the rest of us?

Don’t bother advocating for trail users. You will be shouted down by the homeless advocates who want chaos and inhumanity by pushing for this mess. We need to offer temporary shelter and then BAN all street/trail camping. We require houses/apartments/condos to meet building codes yet we not only allow but enable thousands to live in unsafe tents. Banning urban camping is the humane and kind thing to do. 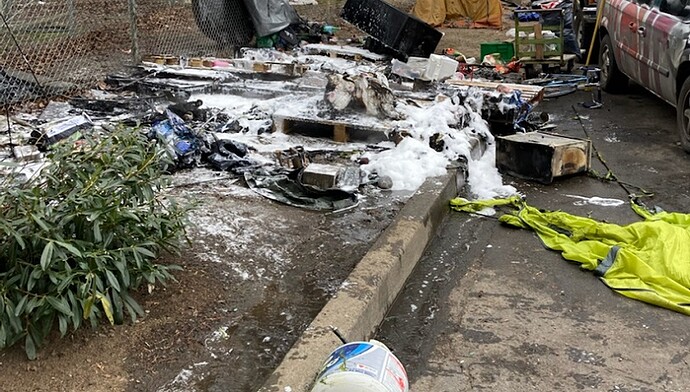 I rode the 205 path for the first time today and I agree - this is an unsafe and unusable path. The sheer volume of discarded needles, debris and tents nearly fully blocking the path is unsafe and a public health hazard! It doesn’t encourage greener commutes…

Yep, Porltand leaders talk about being green and wanting to lower our carbon footprint but they obviously don’t care. Talk is cheap but their actions (or lack thereof) speak volumes. They care much more about allowing and even enabling a few thousand people to destroy the quality of life for others while allowing them to suffer and live in inhumane conditions. We need to vote out the ideologues (Hardesty, Rubio, Ryan, Wheeler and DA Schmidt) who have put virtue signaling and identity politics above pragmatic progressivism. Portland has lost its way. It’s the “city that no longer works”.

Thanks for posting this as I was hoping to venture out onto the 205 later this month under some delusion that things might have improved. Not that long ago I used to train for century rides by doing a loop from NW Portland that took me down the waterfront and then east along the Springwater to Boring, and then back along the 205 North, West along Marine Drive, and then home via the St. Johns Bridge and Hwy 30. No way in hell am I going to it these days. Ten years ago there were always a few tents under the bridges and a few migratory people on the move in that liminal area along the Portland/Gresham border and around the airport, but these days it feels post-apocolyptic if not impassable and literally hazardous in sections.

This was really informative to hear your perspective as a frequent path rider. Any chance you could write a letter to editor or open letter to officials? We need to discuss these issues.

Unfortunately open and frank discussions of the negative impacts of homelessness are frowned upon in Portland. There is a lot of intolerance here. Would be nice if there was more openness and respect of different opinions and a desire for pragmatic solutions instead of an obsession with ideology. The current status quo of enabling is obviously not working. Our leaders are too afraid of the far left homeless activists to make any push towards eliminating the inhumane conditions of street and trail camping. Hence, the suffering continues for both the housed and the unhoused.

100% agree with you, but we need people like you bringing back the nuance to the larger discussions. the forums are a smaller audience, it would be great to see your thoughts larger.

Thanks. Portland has become such an intolerant place. It’s now scary to speak out. So many “Trumpers on the left” in these parts. People will use racism, equity, lack of compassion, etc as a cudgel to silence others. Makes honest dialogue difficult. Politicians have the same problem. Behind closed doors Mayor Wheeler and his staff are talking about banning street and trail camping (a humane response). But he can’t bring himself to speak about it publicly because he is too afraid of the local extremists.

Oh, you don’t have a problem being silent. Nobody is silencing you either.

Squareman,
Do you have any thoughts on how to once again make our bike trails safe and useable for all?

At this point, the last answer is going out and doing it yourself, physical labor.

and hopelessly voting for your politician or whatever who probably won’t deliver on all his promises.

Yeah, unfortunately self cleanup seems like a Sisyphean task.

However, at least 2 good candidates running against Joanne Hardesty who both state they won’t tolerate the current status quo of the homeless takeover of our bike paths. If René Gonzalez or Vadim Morzysky are elected the city could actually support its stated goals of carbon reduction by providing safe and useable bike trails once again.

Based on what I see on their web pages, Gonzalez seems to be better for cleaning up bike paths. But, neither candidate specifically mentions “bike paths” or “MUPS” or “trails.” Gonzalez does say “The unhoused need emergency shelter ASAP, and unsanctioned camps need to be promptly removed from all parks, sidewalks, and streets.”

While I have a “Portland” address, I’m actually outside Portland city limits so I don’t get a vote in this election. I hope the voters in Portland choose wisely.

From what I know of urban design, there is no use in fighting something that is inevitable, that is part of the local culture. People want to bike and houseless people need a place where they don’t get kicked out.
The only valid solution would be to create a better bike path that is fenced or walled, with separate paths for pedestrians and campers.
This multi-use thing, it just isn’t safe for anyone.

We need to be able to offer shelter to those that need it. If people don’t want to accept it then they need to move. Fairly straightforward solution.

Easier said than done, there is no way to enforce it. You can move houseless people by force, but they will eventually trickle back.

But shouldn’t we try regardless of how many attempts? For me, if 75% (just to pick a number out of the air) of the folks on the street were off the street, in temporary housing, and/or on their own in an apartment I would think that would be a great start.
But the City and County are too focused on building over priced “affordable” housing. If you were to ask the housing leaders today, “how many have you gotten off the street into housing or temporary housing?” they’d just look at you blank because they know if that actually had a total tax payers would be aghast (it’s very very few). Because of their incompetence I don’t foresee campers being transitioned off the streets for a very very long time and that’s sad.
In my walk home from my local coffee shop this morning I stopped and chatted with a camper who was gathering up their items as they had camped at a bank. Very nice guy. I offered him my brownie I was taking home, but he declined as he didn’t like sweets in the morning. It’s too bad the City/County refuse to help folks like him.