Record traffic deaths and gun deaths. Can we now saw it was a mistake to cut the police budget by $15 million? 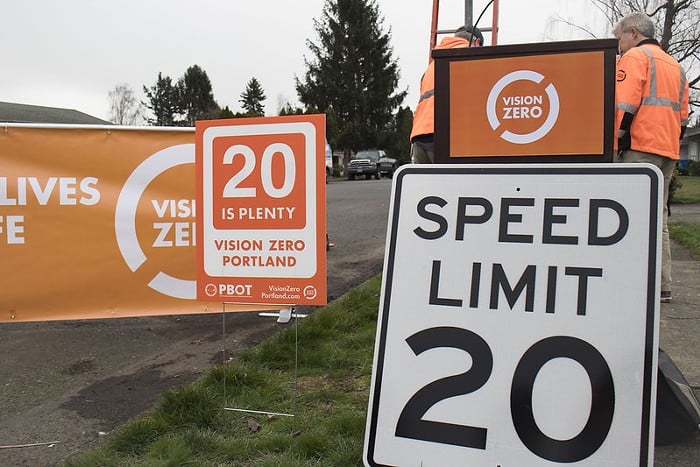 Traffic fatalities in Multnomah County reached a 15-year high in 2020. Now, the county is launching a new public health effort to analyze and identify the root causes of such fatalities in the region. As of October 25, traffic crashes have claimed 62...

Do you have a basis for believing that these are legit per capita records? Or are they just the highest without accounting for population increase? (A trick that sensationalist media loves to pull, and that credulous audiences love to swallow.)

If these don’t represent per-capita highs, which years do? And then, how do recent increases look in that corrected context?

Finally, how do the current per-capita numbers compare to those of counterparts? Maybe somewhere in the Seattle metro area for PNW context, and maybe San Diego or similar for out-of-area comparison.

Cuts included lifting the obligation to put officers in schools and on TriMet — which seems sensible given that both public schools and public transit were sparsely attended in the first year of the pandemic. These, along with even the cuts to two “special teams,” seem likely to have freed up officer time for run-of-the-mill, on-the-street enforcement. See Portland City Council Approves Budget Cutting Additional $15M From Police - OPB

So what’s the real story with police?

The real story is that we are understaffed by 300-400 officers and our community is suffering the consequences especially BIPOC. Despite black males being ~ 3% of our population they have made up ~30% of our homicides. Additionally although murders are up nationwide 30%, they are up 83% in Portland! We can and must do better. People are dying and we need urgent pragmatic solutions 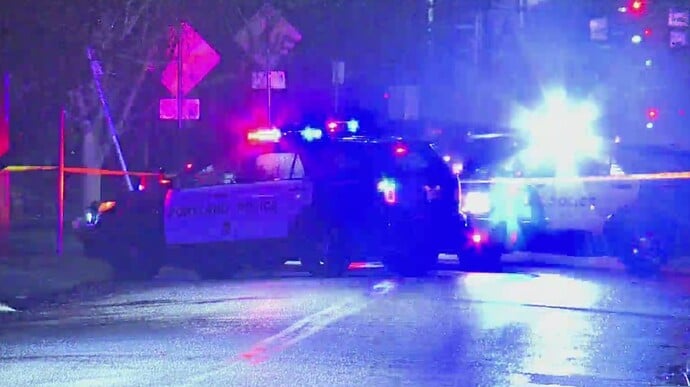 Data from the FBI’s 2020 Uniform Crime Report published Monday show the number of homicides rose nearly 83% from the previous year.

New FBI Figures Show Portland Is Way Above Average in Its Increased Rate of...

Your linked articles don’t answer any of the questions I posited. They also don’t support any of your new claims except the one in bold — and even that still isn’t per capita, so it’s still not apples-to-apples with previous years and with other locales.

Is that your best effort? Given that you authored the original post, don’t you want to legitimately support and defend it? it really seems like you’re just throwing things against a wall in hopes that some people will believe they have stuck.

Jay,
People are tired of the violence and mayhem that Portland has become. In my opinion (and a growing number of other residents) anti-police sentiment has decimated public safety in Portland. It’s become clear we need to have an adequate force to provide essential public safety to our populace. Personally, I would like to ride the I-205 path to work without being afraid of being attacked. However, the most negatively affected by violence are poor and POC. We need to act to allow all members of our community to thrive.

Here is the reference for the police budget reduction:

So your go-to tactic is to evade and redirect like a candidate in a televised debate, rather than respond to scrutiny directly and specifically? Then how are you not just another (would-be) politician, and why should anyone bother to give your posts attention?

About your latest link, which is the only concrete thing you’ve added: Yes, it was widely claimed that the budget was $15M smaller than it was otherwise going to be. It was also less than $9M smaller than the previous year, as shown in my earlier link to city info. Those two metrics do not conflict.

As for the 84 eliminated positions, do you really think that means the city laid off any cops as a result? (If so, can you find evidence?) Doesn’t this aspect of the budget more likely show an attempt to plan around the loss of cops that had already left by that point, given that hiring cops had already been tough for years nationwide?

But anyway: Without per-capita numbers for the claims in your original post, you’ll never be talking apples-to-apples with previous years and other locales — so you won’t be adding anything useful to existing sensationalist coverage, and you won’t be offering any reason for people to follow your efforts. FWIW.

Jay,
I’ll let Portlanders read the articles and be guided by their own experiences on the need for improvement of public safety in Portland.

Whether it was a $9 million or a $15 million cut to the police is not the issue. Whether it was 84 or 50 positions that were cut is not the issue. The issue is that we have allowed an aura of lawlessness coupled with an epidemic of gang shootings and drug addicted zombies wandering our streets. We need to adequately staff our police force so 911 calls can be answered and so that proactive policing (investigating theft rings, traffic enforcement, community policing, etc) can once again happen. I and many others are tired of hearing gunshots on a regular basis and not wanting to let my kids walk the dog due to the “violent crazies” in our neighborhood. I hope my hometown can once again feel safe. A reasonable request in my opinion.

Of course that request is reasonable. So why not post that way originally, rather than post based on dubious claims and figures — only to later disavow them as “not the issue”?

That type of posting is in fact not letting Portlanders “be guided by their own experiences.” What it does instead is only echo and amplify sensationalist media, potentially fostering fear beyond what’s justifiable.

Please do some research on the history of PPB. This is a tactic they’ve employed over the decades I’ve been paying attention to this. They have been authorized and directed to hire more officers for the past 15 years straight, but always have some reason (they have the money).
Police will not restore your feeling of safety. I don’t purport to know what will, but more police won’t do it.

Michelle,
Actually having enough officers so 911 response times meet the national standards will do a whole lot to restore my feeling of safety (and many others I know). Right now if there is a shooting, it’s anyone’s guess if the cops will be able to show up or not. That is not a safe community.

Jay,
My original post was not based on dubious fact and figures as you allege. Your supposition that one needs to look at per capita murders for comparing rate increases is patently false. You seem to be trying to minimize the violence that our community has suffered.
Portland murders increased by 83%, much more than other similar cities. Per capita rates are not germane to that calculation.

Portland is setting records!
Record traffic deaths and gun deaths. [Records per capita, adjusted for population growth? You still haven’t responded.]
Can we now saw it was a mistake to cut the police budget by $15 million? [A budget that was “cut” only before it was ever final, and that became final with an amount less than $9M lighter than the previous year.]

So here’s an exaggerated little caricature to shine light on how percentage comparisons can let us down and how per-capita calculations add context:

Mayberry, USA had just one murder last year and two murders this year. That’s a 100% increase!

Except Mayberry’s population is 10,000 — so its per-capita murder rate is 1 in 5,000. Those are your raw odds of getting murdered in Mayberry, even in its tragic second year.

Meanwhile, Gotham’s population is 1,000,000 (one million) — so its per-capita murder rate — your raw odds of getting murdered there — is 1 in 2,000, more than twice as likely than in Mayberry despite Gotham’s comparatively mild-seeming percentage increase.

Do you begin to see?

Responsible people see homelessness and crime (both directly tied to the epidemic of opioid and meth addiction - cause, meet effect) in the midst of a pandemic as problems that need to be worked and solutions developed, both of which take time, resources, and cooperation. Right wingers see the same problems as political opportunities.

Bryan,
I agree except I would say extremists on both sides of the spectrum look at it as not a problem to be solved but as an opportunity to advance and/or defend their agenda.
Look at all the left wingers in Portland trying to minimize the violence in Portland
Look at all the right wingers using Portland as an example in their criticism of the “other side”
Neither seem interested in trying to improve the current violence and mayhem.
We need collaboration and a shedding of extremist, intolerant beliefs so we can work together to make our community safe.

Jay,
Nope.
I never said Portland is the south side of Chicago.
Per capita rates have nothing to do with % increases.
Of course Portland still feels safer than the south side of
Chicago or a rough area of New Orleans because there are less murders per capita. However, Portlanders have felt more of a loss of safety than other cities because our % increase has been nearly 3x as great.
That is why there is a collective concern over the aura of lawlessness and lack of safety that has come over the city.

You say “nope,” but you’re getting closer.

Notice you wrote “Portland feels” and “Portlanders have felt” — along with the similar “aura.” So on some level, you understand feelings — sensations — are all you can reference if your numbers lack context. That’s why sensationalist media latches onto unmoored percentages: They seem easy for people to “get” and they sound dramatic; they elicit feelings. That draws an audience, at the expense of the audience’s peace of mind, or “aura,” or however you might style it.

But legit public safety is about what really is. Per-capita numbers, which take population increase/decrease into account, would tell us — or at least get us closer. Could be Portland’s safety low point was actually in the 1980s, and we are (not just feel) [X] close to that now; could be Portland still is or no longer is (not just feels) safer than other place [Y]. Unmoored percentages are not capable of telling us.

In any case, why fly blind? You could just keep parroting sensationalist media, but few people find that useful or necessary — so you could expect the same meager response most of your other posts of this ilk have received.

But you do you.

Oh brother Jay, it seems that you are the sensationalistic one whipped up into some sort of “I will protect far left extremism frenzy” by saying an 83% increase in murders is really something we should feel good about.

Maybe instead of trying so hard to say it’s okay because there are more murders per capita elsewhere try using some of that energy to make our community safer (you do live in Portland, right?)

My city of Greensboro NC has consistently raised both the budget and salaries of our police officers annually, sometimes well above the CPI (inflation). Nevertheless we too are setting records in homicides and traffic deaths, and our police are still having trouble recruiting the number of officers that our budget can pay for. Nearly every city in the country over 200,000 has the same issues.

If you are white/Asian/foreign, Greensboro and most other US cities are remarkably “safe” - almost no murders here are of white people nor are the (caught) perpetrators often white either. Over 90% of our local victims and perpetrators are black, followed by about 5% Latinx. Greensboro is a dangerous city in absolute terms if you are black, but relative to other NC and southern cities, it’s actually relatively safe for richer and better-educated blacks who are still moving here in large numbers.