Portland goes back to nature with bike parking 😂

There seems to be a new “back to nature” bike parking program (BTNBPP) for bikes recently instituted by Joann Hardesty’s PBOT. It seems the platinum bike city of Portland has too much bike parking and not enough natural spaces. Therefore they have elected to place 100% organic, hyper-local piles of leaves in bike parking areas. Joann says this has the added benefit of decreasing gun violence by slowing down bike criminals because they have to “slow their roll” when parking their two wheel steeds. She hopes the BTNBPP will be equally effective as her “traffic barrels to stop gun violence” has been. This site is a pilot program but PBOT plans on rolling it out across the city.
So awesome to be a bike rider in Portland! I think we deserve to get promoted to platinum plus! 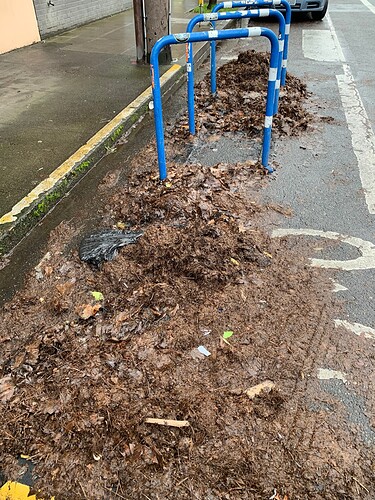 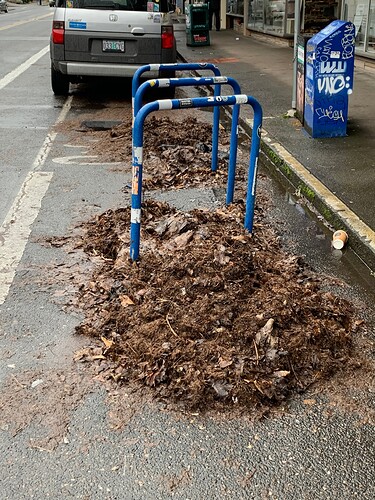 That’s a shame. Though I’m a little surprised that the rack is not 100% occupied by faded orange Biketown bikes.

Bike lanes have been pretty terrible lately too, but so many other city / state services are flat-out nonexistent lately that it’s apparently been normalized. Meanwhile the “bike activists” are focused on that one time the mayor took a hands-free call while driving…

I wish there was a way to return that leaf rot to the yard worker(s)/street worker(s) driveway.

Looking at this one picture alone is sad. But then I reflect on the context - we’ve had snow, ice, freezing temperatures and two holidays in that 8 days. I also look at the setting - a sweeper truck, whether standard or the smaller bike-lane size sweeper would not work here. So essentially PBOT would have to send out a crew with brooms to hand-sweep this area, where arguably the parking is still accessible (I’d park my bike there if it was the most convenient spot).
TBH, I’m happy the crews -who had to cancel their holiday plans to help clear streets on Christmas - prioritized keeping the roadways accessible, rather than focusing on this one anecdote.

timolito,
The pile has been there over 2 months. You might have a future in Portland government with all the excuses you’re giving for their inaction.

I’d bring some garbage bags and pick it up myself if I rode in that area, although at this point it looks like you’d need a pressure washer to get the bottom layer of it off, its sticking.

Here’s an updated photo. By May or June you will be able to get your garden compost at your local bike parking. 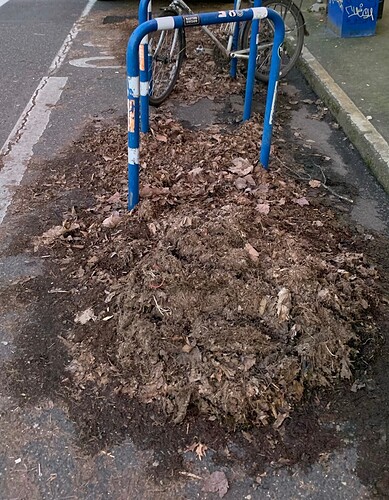 Bet this kind of situation was never thought of when they were installing them.
Bet now the City would just shrug their shoulders and declare “sorry not in the budget”.
Funny, during the past 2 years my taxes have kept going up and up and up, and yet it sure seems like the City is offering fewer services.

Don’t forget what has happened in the past 2 years that could have made your taxes go up and have fewer services offered.

I forgot to take pictures, but look at the Biketown rack on west side of SW Naito under Burnside bridge. Some of it is clogged with foreign contaminants/junk/debris.

Yep, lawlessness and trash reigns supreme in once beautiful Portland.