Can we talk about alllllllllll the cyclists out and about not wearing face-coverings?

Look, I don’t want to breathe my own hot breath on a bike ride anymore than the rest of you all do… but my husband and I have been pretty appalled by what we’re seeing on the daily.

Maybe 2 in 100 cyclists are covering their mouths/noses.
Can we please agree to do better?

There’s a ton of research coming out about people breathing around the the largest contagious viral load up to 2 days before they feel sick.

And there’s more solid research about how being outdoors and exercising (and being in someone’s draft/downwind space) is especially not a great idea.

I get it… I really do… it’s gonna mess up your Strava time or whatever.
It’s not fun.
I do not like it either.
BUT COVER YOUR FACES UP PLEASE.
It’s the right thing to do for yourself and out of consideration for other people out in the space with and around you.

You feel fine. I know you do. I do too. But that doesn’t mean we’re not capable of putting other people in danger. In fact, when you’re still feeling ok is when you’re MOST likely to spread the COVID funk about. So grab a bandanna. I know you have like 4 laying around at least because they all come out for the naked ride!

I am hopeful we can we see the value of following the public health guidelines and current science data to further the larger community benefits we typically agree that biking has already.

Not giving a shit about keeping our germs contained during a global pandemic is hypocritical, especially when cyclists are quick to cite the importance of environment, community, and health values around biking.

People are quick to think of cyclist as self-important jerks. I know we’re not. So let’s do better.

Stay safe out there,

People are not allowed to go out without a face mask except those who feels like they are immune from the virus. Stay safe everyone!

As an observation, the downdraft research that has been so widely reported wasn’t an actual study. Rather, it’s a a computer simulation of the dispersal of droplets during running and cycling which shows that they stay airborne a long time.

The study didn’t detail resources and methods, it wasn’t peer reviewed, and it’s drawn criticism from virologists who point out that viral load and not simply presence of droplets that’s important – and that the amount of transmission from this route will be dwarfed by others. To treat it as authoritative is the flip side to promoting hydroxychloraquine as a treatment.

Your point about people getting too close is taken. Frankly, they shouldn’t be as close as they are in nonpandemic times either.

Great to have you on here Amanda!

I’ve given this a lot of thought. I currently wear one when crowds are thick and I have one at the ready when I need it. I’ve been avoiding crowds completely though FWIW. On longer training rides I’m going with a lycra or cotton neck gaiter, which I know isn’t very medically sound, but it’s better than nothing and it’s a signal to others that I care about them and I’m conscious of my impacts.

I think it’s just a matter of time before bike apparel companies create better designs that work for these times. I’d love to see something that 1) stays in place easily, 2) has removable filters 3) works in cold and/or hot weather 4) looks really good.

Here’s what I wore on a ride this morning 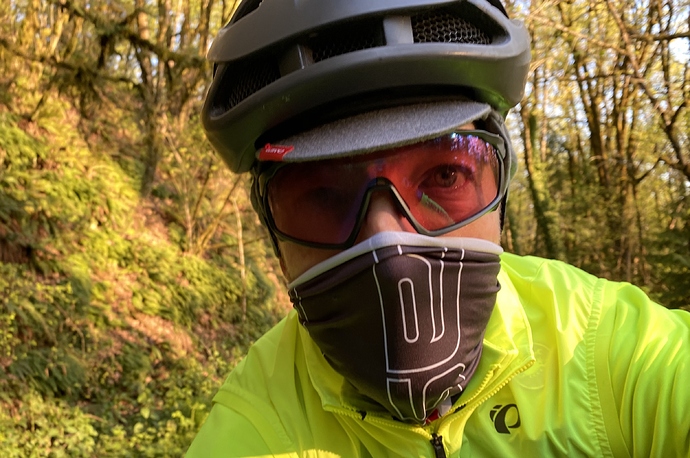 There are three factors to consider when protecting yourself and others from this coronavirus.

PROXIMITY: how close you get to people. Worst case scenario is that you are hugging and kissing them. Next removed is touching things others frequently touched and being in the same room as others. Staying 6 feet away is best and it will keep you and others safe.

DURATION: How long you are around other people. Living with someone is the worst case. Next removed is working with someone. You want to limit the time that you are in proximity to others.

ENVIRONMENT: The space that you encounter others in. Being in a confined area with stagnant air is the worst case, like an elevator or a car. Next removed is being in the same room. Best case is being out doors.

Cycling provides for the best case in all three factors. You can maintain a safe separation and in those rare circumstances that you don’t, you are only in proximity of others for maybe a second or two and all of this happens out doors. Under those circumstances, a mask is not necessary.

That’s a helpful and easy way to think about it. Thanks!

I ride with a mask on lightly traveled roads in Hillsboro and out west. Wearing a mask signals to others that I’m taking the virus seriously and I care about them and me. It might also convince someone else to wear a mask. I believe my mask is a sign of unity when we need it most. For me, I gain far more than I lose by wearing a mask.

There really is something to be said for “virtue signaling” in this situation. Other than my industrial respirator (which protects me, but does little to protect others from me), my masks keep me from sneezing on others. Wearing one is a sign that I believe what every public health spokesperson tells me. It’s an “I believe in science” statement.

I don’t trust spokespeople from the administration. But I do trust science and I believe in signaling to people that I care about them and making them comfortable.

I may not wear a mask when I ride or run, but I also won’t be within 20’. I do wear a bandana around my neck and mask my face anytime I’ll be within 10’ of anyone. I’ll probably get a real mask soon. Looks like this will be our new normal.

I’ve been rethinking this. I don’t normally ride on paths where others might be, but I just happened to be on the Springwater trail for a few miles yesterday getting to someplace.

I’d never been on that part of the path. It was basically like the Esplanade (which I specifically avoid). Slow with people all over the place and practically no one was masked. If I rode sections like that, I’d definitely mask up.

I’ll deal with this by cycling where people aren’t and the riding experience is much better.

If you are concerned about the virus, by all means wear your mask. Please do not expect everyone else to modify their behavior to suit your needs. If you do not feel safe going out when other people have chosen not to wear a mask, then don’t go out.

The problem is not solved by having all the vulnerable people stay home. I can pass it to you as well as other healthy people who don’t even know they’re carrying it to vulnerable people they take care of at home.

This is the new normal I never leave the house without wearing a mask, bringing my alcohol, and practicing social distancing.

Having spent some time recently in Recall-Kate-Brown country (i.e. central and eastern Oregon), I will say I was taken aback by the difference in mask-wearing rate between Portland-area and out there.

In all fairness, life for a lot of people in those areas is naturally socially distanced and a normal person doesn’t have nearly as many encounters with strangers as one does in PDX.

I think part of the antimask backlash is a response to a one-size-fits-all procedure resulting from a process where we picked the size. So even though it’s still a good idea, people got riled up and are cutting their noses to spite their faces.

And there are plenty of ninnies from Portland. If you look at the beach, trails, or many popular outdoor destinations, you wouldn’t know there was a pandemic going on. I personally don’t like going out except when it’s really early, late, hot, or in a location where I know no one will be.

I think you should really read up on what is called virus load. There is no danger from the actions you describe, outdoors.

Hey @jmrocky, this is an old post from well over a year ago, fyi.

Our understanding of the virus has increased drastically in that time. I don’t think anyone is encouraging this now.