Parking Portland Style You gotta to see these photos! 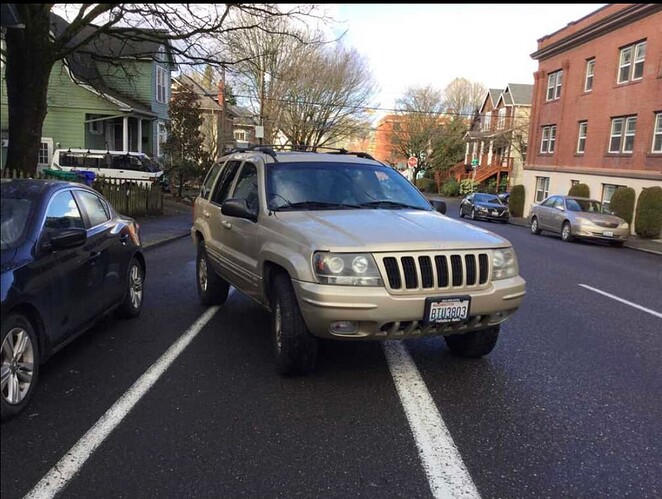 image1107×835 107 KB
So this is how we allow people to park in Portland? I think we need to be demoted from a platinum bike city to the “rusty sheet metal” level. This is today on Belmont. 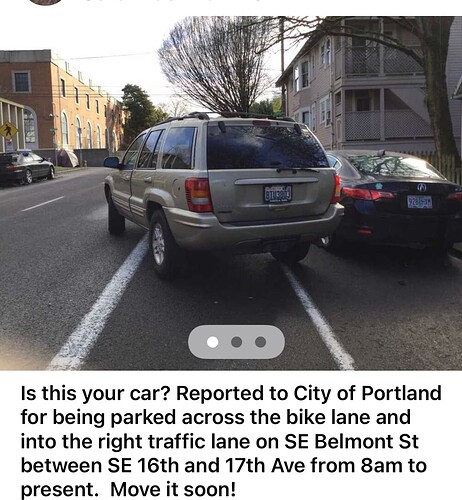 On my walks I pass an apartment complex where one of the driveways is routinely 1/3rd blocked by one particular car who could easily park further down the street and walk.
I’m amazed that folks in the apartment complex hasn’t gotten them towed for that kind of B.S.

There is rare enforcement of laws nowadays in Portland. That’s what it is like living in a failed city. 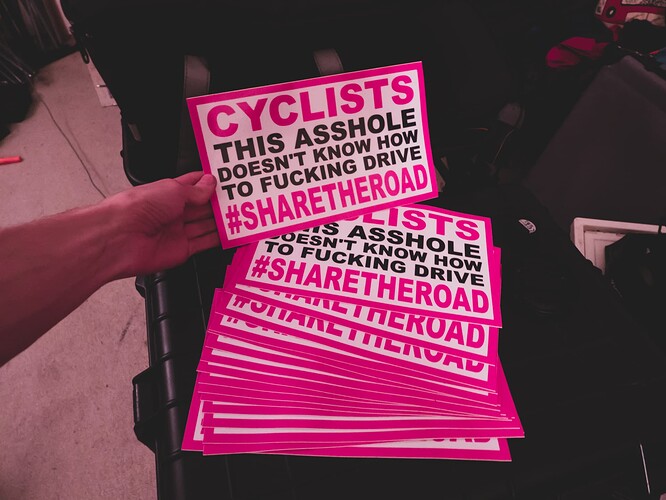 I’ve designed giant permanent bumper stickers for these specific drivers that I carry with me. Hopefully having to spend a few minutes peeling the sticker off could deter their actions in the future.

So, even if a car’s owner doesn’t catch you vandalizing their car with one of those stickers and beat you within an inch of your life, how do you suppose they’re going to react the next time they encounter another cyclist out on the road? I realize that you’re young, but even given that, you seem to be lacking in common sense and consideration of how your actions might affect others.

Oh you implying violence over a simple sticker? Why do you think its legal for towing companies to put their own stickers or notices on others cars? Have you heard of the stop a douchebag movement in Russia which does similar? The act of the driver having to peel the peel-resistant sticker is a short lesson. It’s a sticker tough guy, and I’ve put on this sticker directly in front of a driver before who then peeled it off afterwards, nobody was beat “within an inch of their life” over a sticker, Bryan.

I realize that you’re young, but even given that, you seem to be lacking in common sense and consideration of how your actions might affect others.`

One almost wants to feel sorry for the narcissists that we find in our communities.

They are so focused on doing things to play to their already over inflated egos they try unusual, and often dangerous, things. First its trying to scare people with loud noises. But when that didn’t garner the kudos they were so needing they moved on to vandalizing public property. When that was shown not to be a good idea for many reasons, they now look to defacing private property in the hopes we’ll pat them on their backs and give them applause.

It’s really very sad in way. We can only wish them the best in the hopes that they can fight their narcistic tendencies.

"They are so focused on doing things to play to their already over inflated egos"
FALSE
I have no ego here by simply uploading videos of bad drivers, my firetruck horn bike, as well as spraypainting a bikelane to be gay, I’m just having fun and have no intention of trying to “boost my ego” since I already feel like a loser due to many commenters here such as yourself who try to find any reason possible to whine with my little shenanigans, try having a little fun in life and see where that gets you.

"First its trying to scare people with loud noises."
TRUE
Some shenanigans yes, theres tons of YouTube videos of train horns on peoples cars doing the same thing, however almost everyone I spook loves the horn, laughs, asks me about it/how much it costs, etc. The only ones to complain thus far are those online who try to find any reason to get upset since I know you are bored af and looking for drama. I get it, you gotta try and stir the pot somehow on something as neutral as a bicycle forum. Some of the bad drivers I’ve honked at have even given me a thumbs up afterwards and admitted to their mistakes.

defacing private property
MOSTLY FALSE
Legal to put a sticker on someone’s car, if not barely illegal and unenforced, why aren’t tow truck companies and those who put flyers in your door prosecuted? Have you heard of Stop A Douchebag on YouTube, a series that targets bad-drivers with even larger stickers than my own and actually makes an impact, much like I am trying to do.

"in the hopes we’ll pat them on their backs and give them applause."
FALSE
I don’t look for verification nor compliments after stickering a bad driver’s car, I expect hate comments and look forward to pointing out how twisted and overexaggerated their points are.

Narcissist: "a person who has an excessive interest in or admiration of themselves."
FALSE ACCUSATION
I am in no way interested in myself, I have a boyfriend after all unlike your self-loving self (/s). Also, so far I have posted a video of my firetruck horn here, and people such as the owner of the site liked it, just a funny obnoxious project that I thought would be interesting to upload on BikePortland and YouTube since I’ve only seen one other video of a bicycle with a firetruck horn, which is from 2014, not the best setup either since they were using a hand nozzle as their solenoid. I was in no way attempting to boost myself by uploading a video about a firetruck horn on my bike lol, I just thought it was a rare sight that others would like to see, which was the case. I didn’t boast or act better about myself in any way shape nor form. If you think uploading and sharing a video is being narcissistic, then by that logic all YouTubers are narcicists.

I have also uploaded a video of a car crash I caught on camera with a friend here, which shows a truck rear-ending a car at like 20mph just feet from me. I didn’t try to advertise myself/ego or look for validation either with that at all lol.

And finally I uploaded 1 video here in which I confront a bad driver who intentionally attempted to drive me off the road. Keep in mind all my bad driver videos contain the license plates and driver descriptions as well as offenses so the drivers license plate can be googled and my video of their unrational behaviors may be publicized. I was in no way trying to up my ego or whatever by posting a video of me awkwardly cursing out a bad driver who put my life at risk. I was trying to share that video to my friends, any stranger cyclists who were interested, and to publicize their behavior and make it searchable online. I of course expect lots of hate from cyclist-pov footage.

Me uploading those clips to these forums is because I thought other cyclists would be interested. I didn’t want to boost my ego, viewcount, or whatever, I already know all of those will be low since I’m a cyclist-pov uploading to YouTube, not the most popular subject since most people drive. I’m inspired by MPLS Bike Wrath, another YouTuber who confronts bad drivers, however he lives in the Twin Cities. If there was another YouTuber that does things similar to him but in my area, then I’d love to know about it. Thus I do things similar with confrontations, and am therefor sharing it for others who may be interested in the same way I am.

On my walks I pass an apartment complex where one of the driveways is routinely 1/3rd blocked by one particular car who could easily park further down the street and walk.
I’m amazed that folks in the apartment complex hasn’t gotten them towed for that kind of B.S.

Construction scumbags are absolutely the worst. Have you noticed Washington plate vehicles related to Paul Davis Restoration regularly parking employee and security vehicle in the sidewalk and in the driving lane on Weidler at Heidi Manyor’s burnt carcass?

The city ordinance specifically prohibits this, (16.20.510 Construction Area Permit. | Portland.gov) but because construction companies have a lot of money, they essentially control our city. I am talking about BMW convertible, SUV, etc parked on the area closed for construction. The reason for this prohibition is to prevent construction scumbags from asserting “construction necessity” to create free employee parking.

Those look hostile to me.

And what is your point?

Exactly what I said–that they look hostile to me.

You made a statement, but you have yet to explain why you made it. I guess I should do the same thing.

Maybe the use of the f-bomb is a bit over the top and feels hostile? Sort of funny but it’s sophomoric and obnoxious. Sorry but that’s my opinion. I do like chicken tacos though.

For all of you who critize FlowerCrow’s actions here, what do YOU do about dangerous drivers who elevate their own ego, convenience or hurry over YOUR life? Just let it go? Cower? Quit riding? Call the cops? I used to be confrontational, angry even threatening when I had the opportunity to confront a driver who nearly killed me – it’s happened many times. Most of the time they drove off shaken-up and terrified, a few threatened to shoot me. I don’t blame FlowerCrow for these creative ways of drawing attention to a very real threat to our lives. For me, it took many years of angry yelling to finally realize I wasn’t reaching anyone. I’ve found that suppressing my anger and having a non-confrontational talk with people about how their driving nearly killed me usually results in a quite human conversation. I’ve even had some nutjobs who were on the verge of beating me to a pulp apologize and tell me to “be safe out there.” It’s all in the approach, and it took me decades to learn it. But don’t condemn FlowerCrow for doing his best to address a problem that needs addressing. So again, what are you all doing that’s better?!

Yes, violence or aggression to stop or improve a past situation is rarely productive. I like your approach.

I also prefer that approach for these reasons:

The approach I really don’t like is reacting illegally. First, there are typically legitimate reasons why illegal things (like putting stickers on someone’s property or blasting them with a fire truck horn) are illegal. Second, it’s hypocritical. It’s saying, “I don’t like that you decided that a law doesn’t apply to you, so I’m going to react by breaking a law that I’ve decided shouldn’t apply to me”.

Yeah like the others day someone was blocking a fire hydrant with their car. I saw he was still in the car. I asked him if he jnew he was in front of a hydrant and he said “oh I’m moving right now, thanks for letting me know.” No screaming. He was happy, I was happy.

And which law would putting a sticker on their car be?