Having been quarantined in The Boonies for two of the past three weeks I wasn’t prepared for how utterly deserted-by-cars Portland’s streets had become. My hunch is an across-the-board drop of 90%, but that is just a guess. Does anyone know a place to look this up?

It really is remarkable. Here are some pics from Friday. I’ve been wondering how it will impact gas tax and parking revenue. Going to be a huge hit to PBOT budget.

I’d love to do a story about it. 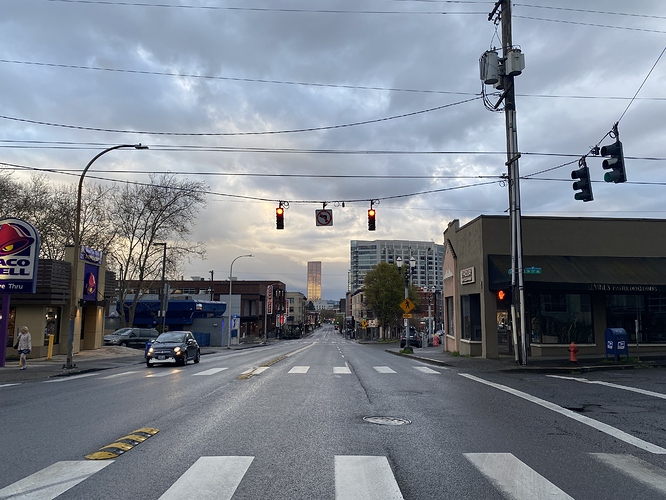 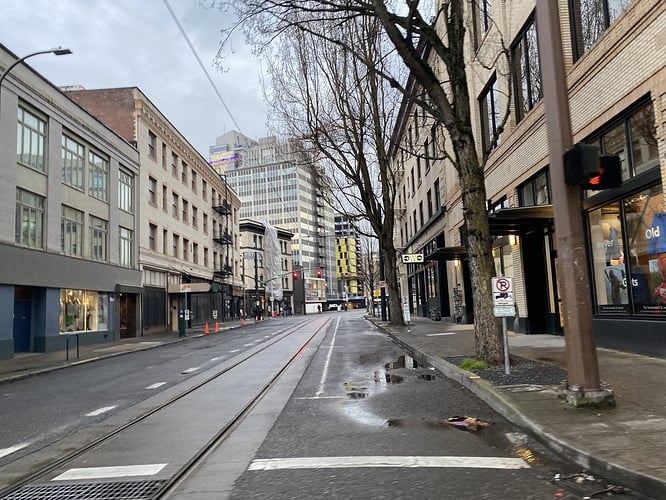 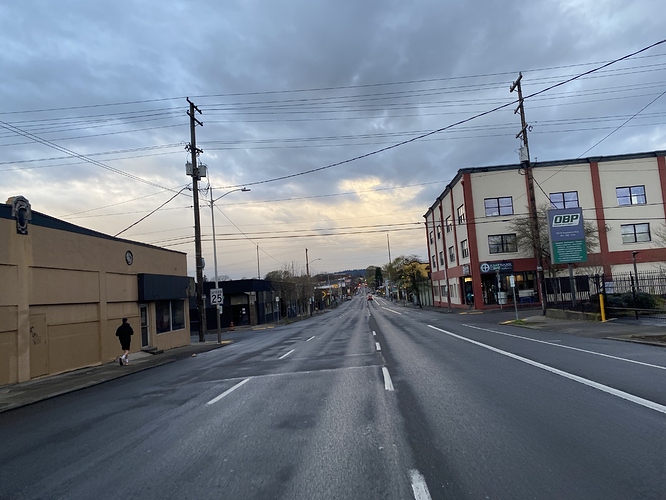 Superb photos. They capture the surreal mood perfectly.
I just read this this morning (about NYC):

“Very often these days, when I emerge from my apartment, the world looks like a science fiction movie set: on the broad avenues not a sign of people or cars or even windswept trash; just long stretches of vacant concrete; as though the atomic war of contemporary imagination has at last begun. On the side streets one or two men or women slink along, hunched over and averting their eyes from each other.” (Vivian Gornick interviewed by the New York Review of Books)

What you want – presumably a unified place to look up to date detailed traffic counts by location – is not available.

However, there is some useful information. The google coronavirus mobility reports available at COVID-19 Community Mobility Reports are certainly interesting with Oregon’s report available at https://www.gstatic.com/covid19/mobility/2020-03-29_US_Oregon_Mobility_Report_en.pdf

Based on Google location data, it tells you people still do a surprising amount of retail shopping (I’m guessing that’s big box stores that also sell food), but it also shows a surprising number of people going to work.

Anecdotally, the differences in traffic I’m seeing depend on where you are. It’s lighter everywhere, though some places only slightly less. Other places, the volume has cratered. Some places have become very peaceful – will be riding in some of them today. There are other places where people use the more open roads to drive like lunatics.

The reduced traffic doesn’t just affect gas and parking revenue (note that red light traffic cameras are reporting drastically less revenue), but lodging taxes and other revenue associated with people who come in. The city has already announced they’re laying off 950 employees.

The stats for Multnomah Co. are interesting and rather fine grained, but don’t for whatever reason seem to line up with what I’m seeing: Hawthorne, Division, where auto and truck traffic has basically plummeted to zero.

I’m also seeing it practically zero in some spots – frankly, these google numbers are much higher than I expected. I’m not sure exactly how Google classifies data, and how they do that has a huge difference on stats. For example, you’ll see a 14% increase in residential movement – I’m guessing that’s exercise, which squares with what I personally witness.

Hawthorne and Division are arteries to the core which is now basically shut down, so they are particularly strongly affected as are feeder streets such as Interstate. The drop on some other streets such as Columbia and HWY 30 isn’t as pronounced – the impacts appear to be highly specific to who uses the roads and why. For example, people still need to eat and they keep hunting for stuff like TP which drives grocery/retail numbers up.

Zero meaning zero traffic, or zero change from before all of this?

Exactly my observation. Minimum 90% reduction from before.

Wow, it’s not crowded anymore and fuel are way cheaper right now.
It nice to see how peaceful the street are compared before, I guess the pandemic made a positive impact to our environment. Less pollution and more family quality time at home.

What struck me about those Google Mult Co stats is how everything is down… Except for residential. This tells me people are sticking closer to their neighborhoods, and seems like a good reason to consider taking measures to create more safe distancing space on n’hood greenways? 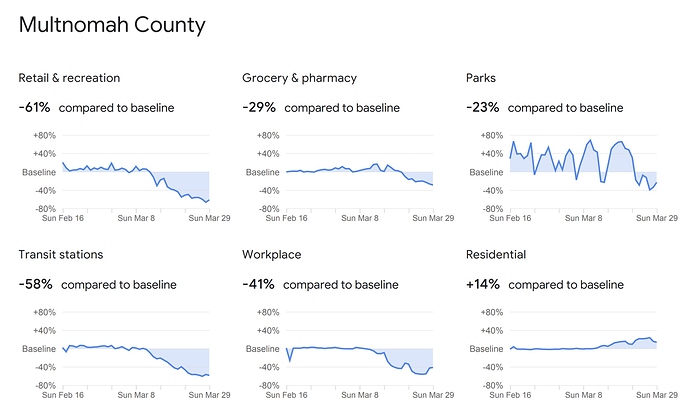 My read is the same as yours – there is more residential walking and cycling everywhere I look. However, I would add that except along specific corridors and in specific places (like parks), the space situation is excellent.

The problem I see is not the number of people out and about, but that they frequent too few places. 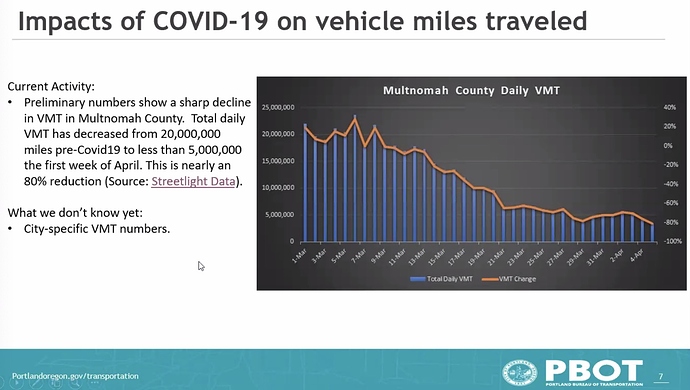 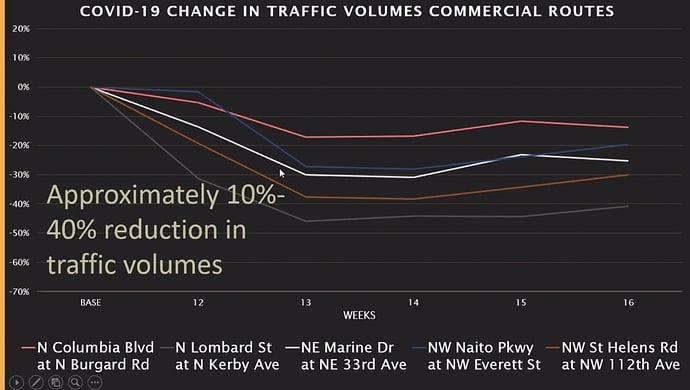 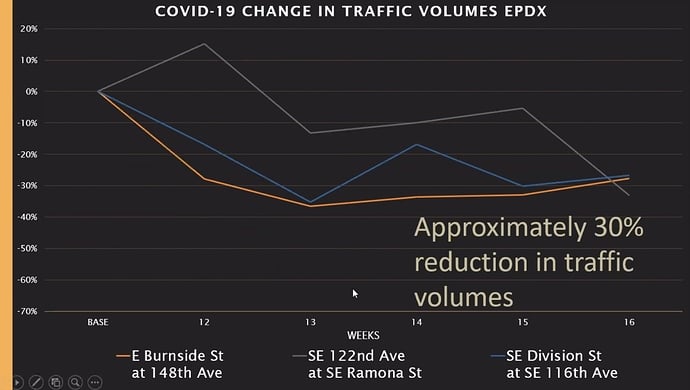 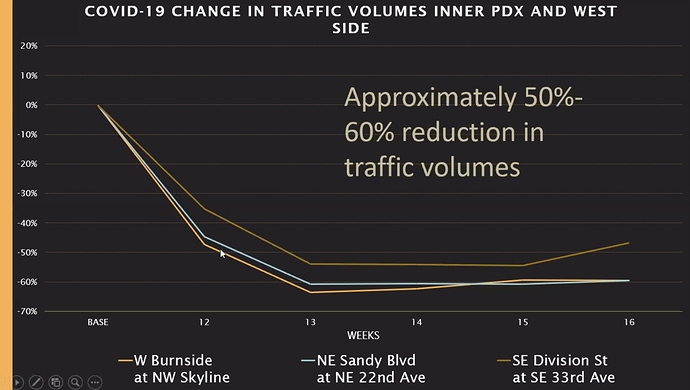 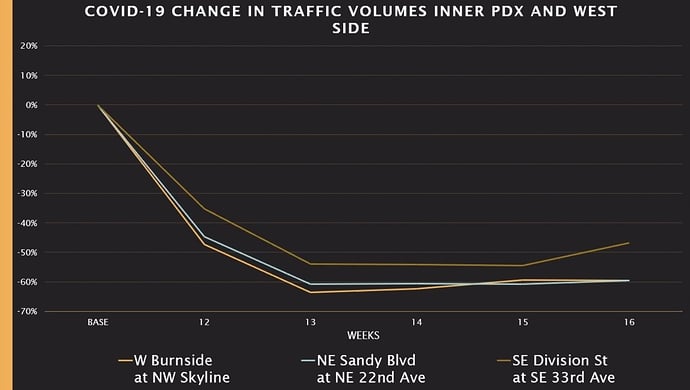 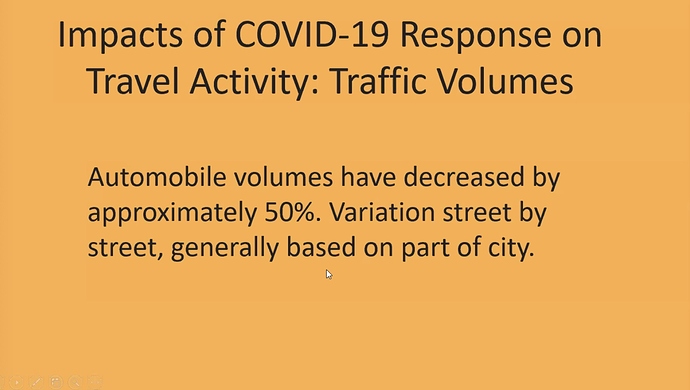 The question is why is this drop little given that most destinations that people would go to are closed.

I haven’t seen any numbers, but I’m wondering if closed restaurants and entertainment venues hasn’t resulted in an increase in the number of trips to grocery stores? Likewise, with more people at home, I’m wondering if there might not be more driving to hardware and home improvement places as well as dog parks and the like? People avoiding public transit may be a factor.

Riding in the hills, along the river, etc, you’d never know there was a pandemic – the popular places look packed. Thinking people might be driving there too.

A few anecdotal observations from our experience.

I would guess that if you broke down these numbers by time of day, that curve has been flattened as well. We live next to the Fred Meyer on NE Glisan, and the number of people there seems to not vary much between day and evening, and between weekday and weekend. In the commercial areas outside of downtown, especially around grocery stores, you might even seen an increase in midday weekday traffic.

We are a one car household, and I usually combine bike and bus to get to work in Tigard. My wife was laid off for 4 weeks, and I ended up driving the car to work for multiple reasons; saved time (20 minutes each way versus an hour plus for bike/bus), safety (higher risk of infection on the bus) and reduced bus frequency and capacity. My wife is now back to work, but driving out to pick me up the afternoons, primarily because of the bus frequency/capacity issue. Coming home, instead of three different buses heading downtown in a 15 minute window after I get off work, there are now two, both of which are limited to 10 riders.

Lastly, while we are not going out to eat at restaurants, we are going out to pickup takeout, at almost the same frequency. I think the push to support local businesses is good, but it may be driving some auto traffic.

Those charts don’t match up with your summary, Jonathan. The first chart shows an 80% reduction overall, which sound about right to me.