I’ve ridden the bike path on the south side of this street, connecting NE Portland to the esplanade hundreds of times. It’s a key link in my commute, as well as in getting access to the bike paths near the river and on the West side. I think many on this forum are familiar with this stretch.
Recently it has become a favorite spot for homeless to camp, given the shelter of the overpass. I honestly don’t have much of a problem with this, as the campers are usually respectful and keep their tents up against the guardrail on the South side. I even saw a man sweeping the pavement the other day, and have never had to deal with glass, poo, or anything similar.
However, it does narrow a cyclist’s passage somewhat, and because it’s downhill from both directions can get ‘sporty’, especially when cyclists, pedestrians, and others are going in both directions. Also, this doesn’t bother me as I’ve never felt endangered by this slight squeeze.
However, I do have a problem with the pavement. Right where it’s at its narrowest and at the bottom of the hill (in both directions) there are two very wide ‘seams’ in the pavement, smack in the middle of the available passage. These seams have been filled with mastic/sealant, but it has naturally been eaten away over time, leaving wheel-hungry gaps.
So this past Monday afternoon as I was riding through here, I was forced by tents and other users to ride over one of these seams–at speed–and got my front wheel locked into it. Just like the streetcar/light-rail tracks everywhere in the city. Over the bars I went, with a resulting trip to the ER a few hours later.
I don’t know whose responsibility it is to keep this riding surface safe, but I hope something can be done here. Sweeping the homeless camp isn’t a solution (and is not the point of my post), but keeping the surface safe to ride should be a priority…for someone.
In the meantime, if you ride through here please learn from my mistake and avoid those seams or at least slow down through there. 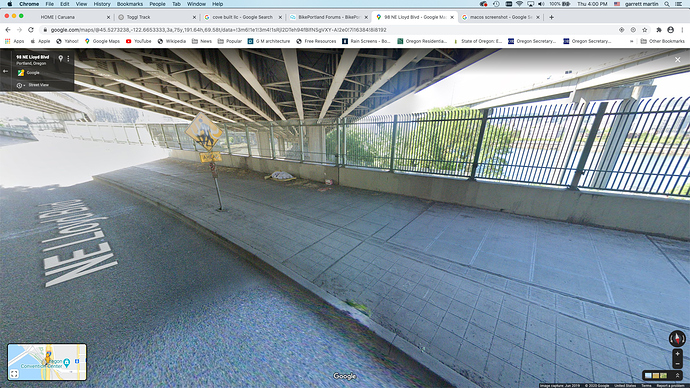 I’m sorry that happened to you. And I’m not a litigious person, but I think finding a good personal injury attorney and suing the responsible party–I’m assuming that’s the City of Portland–may be the only way to both pay for your medical bills and bike repair, and force meaningful change to how this piece of infrastructure is maintained.

Sorry I didn’t see this till now, so perhaps you’ve gotten an answer already.
I would suggest calling 503-823- SAFE (or alternately, email Safe@PortlandOregon.Gov) and noting the issue. You’ll get an auto reply suggesting you allow 8-12 weeks for a response but it may be quicker.
Best part is, if that’s not City of Portland right-of-way they will forward it to the state (or county, but I’m guessing state since it’s under a freeway, which is generally ODOT’s responsibility).