Kona bike found in my yard

This bike looks like someone cared about it. Bike was 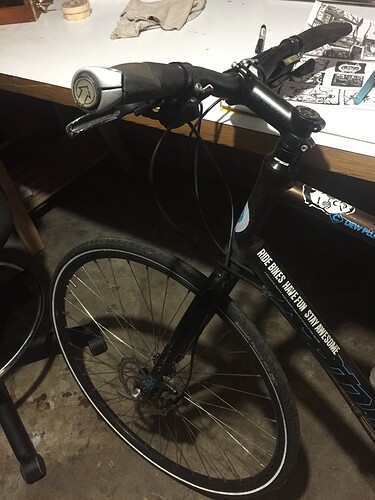 Run the S/N on bikeindex.org and if no hit, turn it into the police. (503 823 3333) Simply posting like this, the thief, or some career criminal vagrant drug addict (using a photo it took before they stole it) could claim “that’s mine!”.

Follow all that and if its not in police database as stolen, and nobody with credible evidence of ownership claims it, 60 days later, you could file for ownership.

Thanks for the advice.

If you also want to drop me a line at bryan@bikeindex.org with photos and a serial I can assist

I ran the serial number today and it’s not in the system. I’ll call the police number tomorrow and see what they say.

Best to call when the call loads are low so you don’t get left hanging for 30 minutes on hold or be told the officer will come by sometime in the next 12 hours.

Here, it says they’ll release it to you after 60 days.

If you see what appears to be an abandoned bike, contact police at the non-emergency number below, to request the bike be taken to the property room as found property.

If it’s a bike you want, you should definitely follow through. If you do not, the city sells it on govdeals.com and take all the money to themselves. Don’t let that happen.
Property and Evidence Division | The City of Portland, Oregon

Thanks for doing that. Might also post on NextDoor requiring a description or serial number to ensure it’s the real owner.

Shows why it’s super helpful to register your bike(s)

Thanks for doing that. Might also post on NextDoor requiring a description or serial number to ensure it’s the real owner.

That’s why you just turn it in and let the cops deal with it.