We recently moved to a house adjacent to the 205 bike path. Our family loves to bike and it is convenient to be so close, however the number of tents along the bike path is a little concerning.

I don’t necessarily mind the homelessness; if there is not actually a history of crime along that corridor then I will probably just stop worrying. But today I saw this, which happened along a stretch of path my 15yo son has taken.

Does anyone have more information about the safety of the bike path over the past few years? How do other people feel about it?

I’ve lived near the 205 path for several years and have watched it devolve from a relatively clean, safe place into a hazard that I try to avoid. It sucks but it’s true. The quality of life and safety issues have convinced me that living near any public amenity like a multi-use-path, greenspace or even a city park is a gamble. If you’d told me that 5-6 years ago I would have laughed… but now it’s very much true. Our city has completely failed to address the matter. And by that I mean it’s failed both my neighborhood AND the people living on the street.

Whether or not the path is “safe” depends on a lot of factors including your own comfort level, situational awareness, and a heaping helping of pure luck. You will likely be fine passing through, but it all depends on who you encounter and what frame of mind they’re in.

Personally, I’ve had several unprovoked encounters. I’ve been blocked intentionally, I’ve been yelled at and forced to take evasive action for merely making eye contact with someone on the path. Once, out by Marine Drive, I had a large hunting knife flashed at me.

The reality is that in these places one is often alone, with escape routes hindered by fences or roadways etc. Emergency access often isn’t the best, and good luck getting PPB to respond to anything short of bloodshed.

Another more recent trap on the Columbia Slough path:

Hi everyone, I was riding along the Columbia slough trial. I was coming down a hill on a corner and saw some fresh grass in the path. I did not realize someone had placed a perfectly straight line of large rocks across the bike path at the bottom of the hill and covered it with fresh cut grass. I hit the rocks going 20+ miles per hour and had a pretty decent crash. Note pictures taken after I started clearing it. Also note as a new user I can only post one picture at a time Location of trap: …

Druggie transients have a greater tendency of being dangerous and transients are statistically more likely by a great margin to be a druggie. They have no documented permanent place and are more difficult to track down when they commit a crime and my experience is that the police’ hands are too tied up to deal with this unless it’s a murder or a life threatening injury occurs from a crime.

Lack of witnesses put you at a disadvantage when you become a transient’s crime.
Having a means of self defense and a ride cam is a good idea.

I’ve been blocked intentionally, I’ve been yelled at and forced to take evasive action for merely making eye contact with someone on the path.

This. These have happened to me, and it’s only gotten worse.

I avoid riding on it when I’m alone. I avoid most of the multi-use paths (I-205 and Springwater) in the city for all the reasons above.

You’re safer riding in the middle of a quiet residential street.

Get a bike camera. I put a camera on all my vehicles, and carry one recording when I walk.

Vagrancy issues are not getting any better. Wheeler is contemplating checking out of Joint Office of Homeless Services. Portland mayor threatens to end homeless partnership with county | kgw.com

Hi @gmoothart. I have personally never had a problem while biking on the path, something I do about 3-4 times per month. I could see how some people might be frightened by the conditions though. It’s very full of people and their belongings in a few places.

Thanks for sharing that link. I hadn’t seen that story. In general I ride quickly and stay vigilant when I’m passing other people. It sucks that we are in this position but that’s just how things are right now. I get sad when I think how many people just avoid riding the paths altogether. I understand why, but also know that the way we can make the paths better is by riding them more - not less.

Have you been out there? What do you think so far?

I ain’t afraid of no nutty street tweakers! For the most part, they’re too wrapped up in their domestic dispute and drug drama to be any more a hazard than a large animal straying suddenly out onto the path would be.

Besides, you have to consider a couple things. 1) Are you assessing your threats based on facts or hyperbole and hearsay, and just how precious or risk-averse are you? (Remember, we’re all getting older and are going to die; death avoidance is an American cultural neurosis.) 2) A part of community policing is deterrence by presence, just like posting security guards in stores — the worst of the zombie Morlocks will run roughshod with all impunity all over the trail and surrounding neighborhoods if us squares/normies/whatever quail in fear at the sight of some muttering troglodyte digging holes in his face, so much so that we abandon the trail — effectively tacitly sanctioning hostile takeover of a public byway.

All that said, don’t be a fool about it. I always carry a 1000 lumen tactical flashlight, a small canister of pepper gel, and a blackjack on me, even when I’m riding through the Pearl in broad daylight. I’m not about to be anyone’s victim.

Portland Tribune said in March 2019, which references this bikeportland article

The audit released Wednesday said increasing demand for services has pushed the program past its capacity. Among other things, the program needs to do a better job collecting data and communicating with residents who make complaints and homeless people in camps to be cleaned up.

The audit was released just two days after BikePortland, an influential bike advocacy organization, declared obstructions caused by homeless camps along the I-205 bike and pedestrian path to be ‘unacceptable.’

The audit is released just two days after BikePortland declares obstructions caused by homeless camps along I-205 path 'unacceptable.'

I ain’t afraid of no nutty street tweakers!

Did you happen to notice that the guy who was arrested for smashing out windows in one of the protests was a OUT OF STATE TRANSIENT in possession of a loaded gun? Don’t assume druggies and transients in tents are not armed. Assume they’re dangerous. 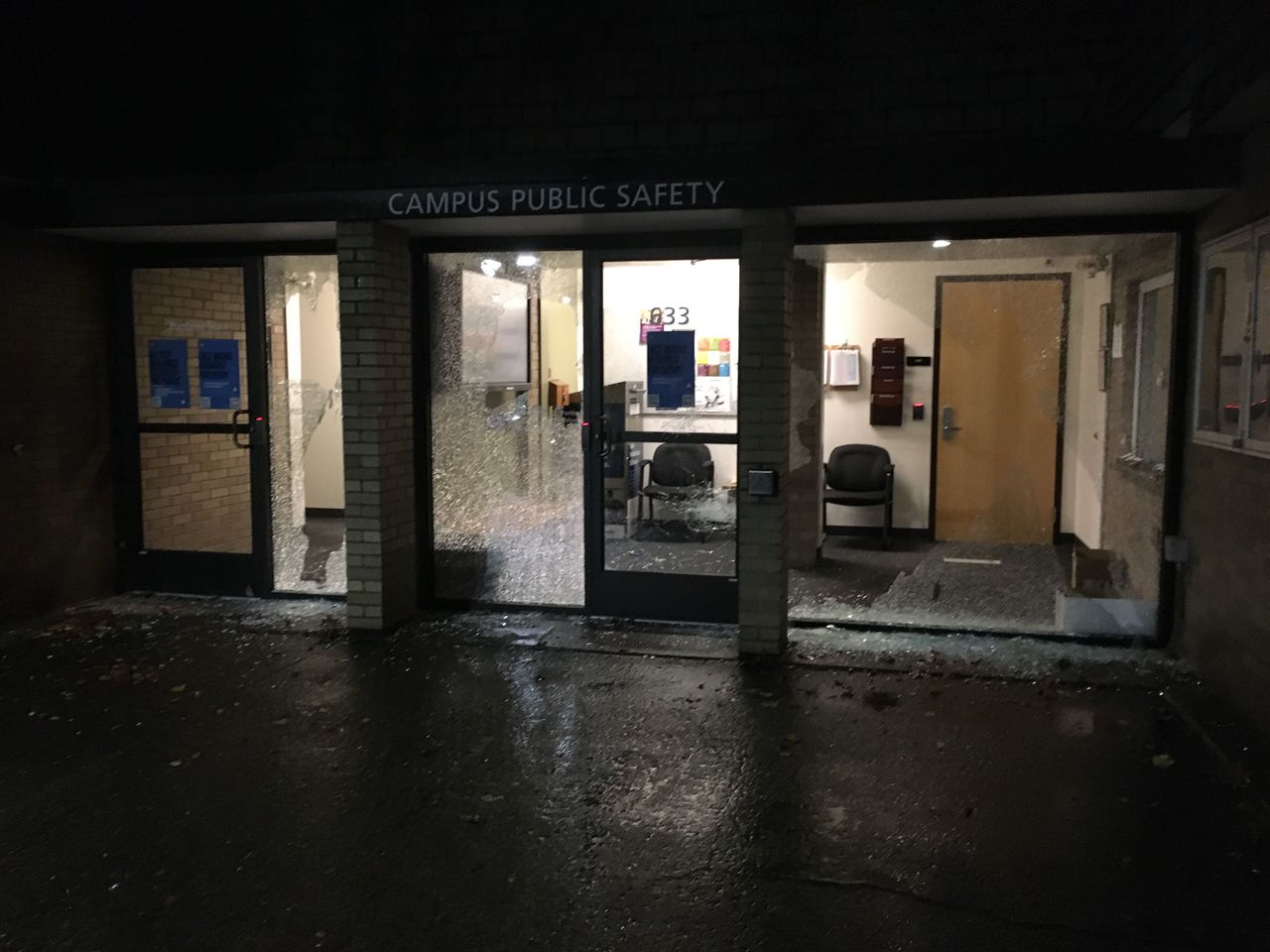 The lack of police intervention drew criticism Monday but also growing frustration that some people remain committed to using violence and destruction in the city to further an agenda.

I ride the 205 path a few times a month, to and from Gladstone (one terminus) to about Burnside, and, in addition to the human obstacles outlined here—and which are real and present— the other big hassles are associated with where the path ends for a while and you hafta ride the street: once on 212 in Clackamas where you have to merge with heavy traffic for 2-3 lights / turns, and again near Flavel, where you have to join streets lined w camping vehicles/ sketch/ debris and make a couple cross-traffic turns. One hopes the city / Metro would some day reroute these short sections, but I’m not convinced.

Things like this part of the problem by making it easier for transient related junk to be brought into the area. Here’s a missing bollard by 7-Eleven/Home Depot near airport and transients are driving their vehicles into MUP to carry their junk into the area.

Missing bollard by 7-Eleven near NE Marine/112th Ave has become the point of ingestion for transient related motor vehicles to bring in/bring out stolen bikes, tents, trash, detritus and what not. 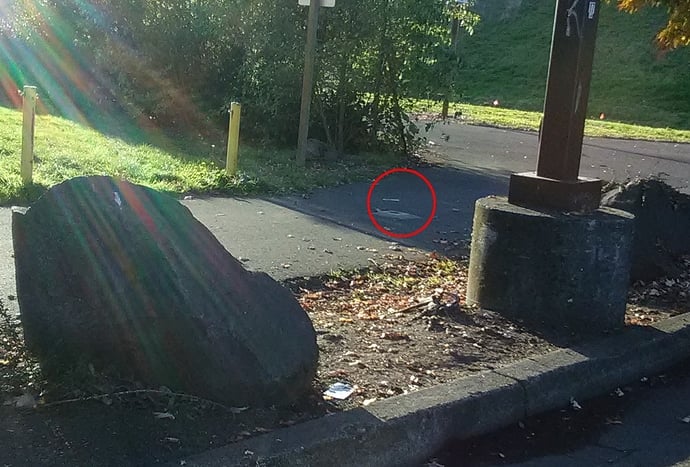