I have no words for this affront. Springwater closed, no detour

I’ll let the images do the talking. 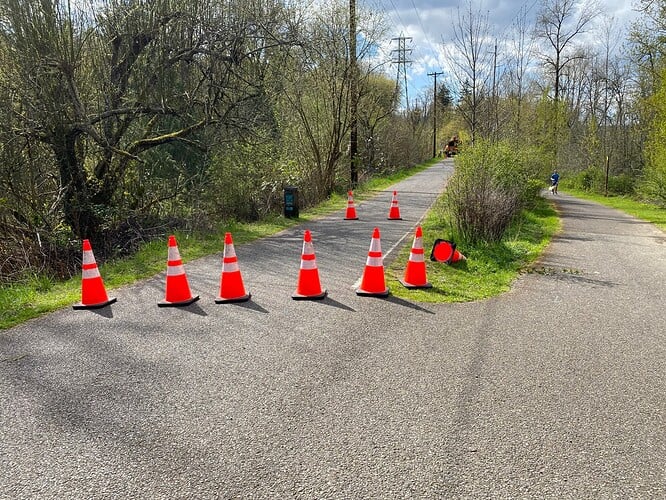 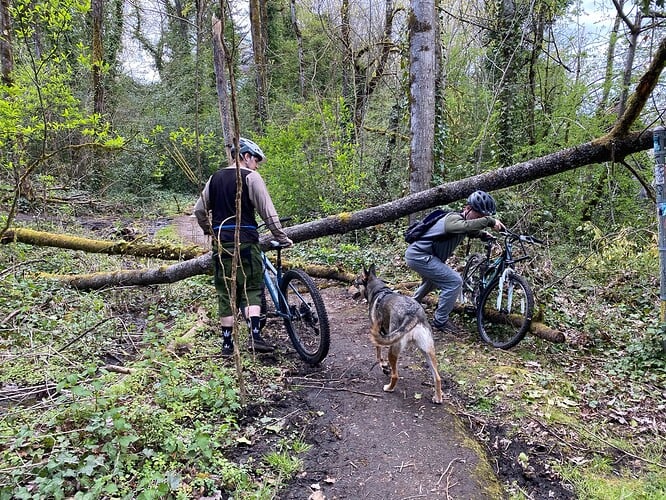 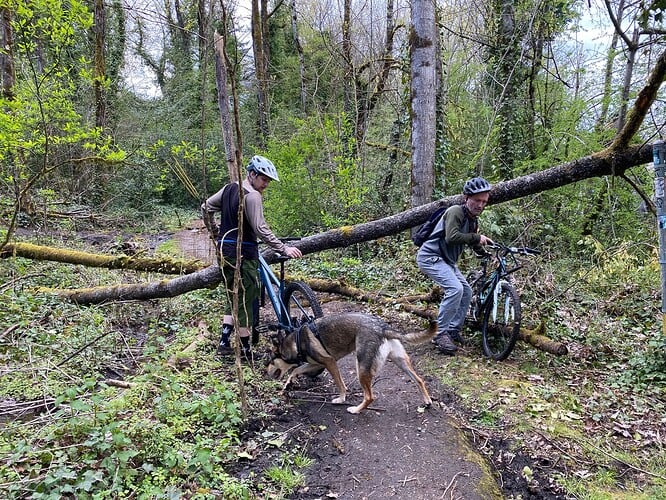 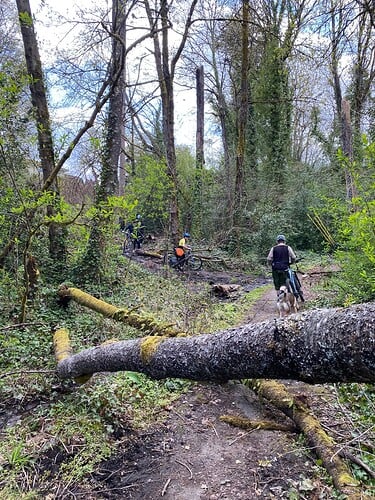 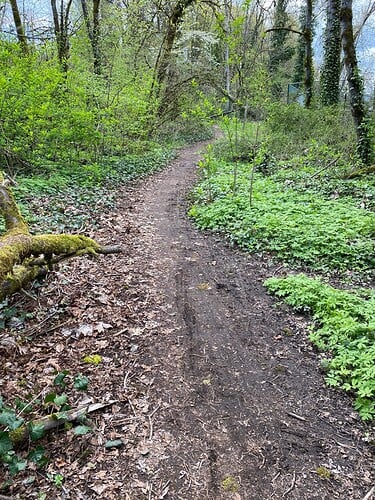 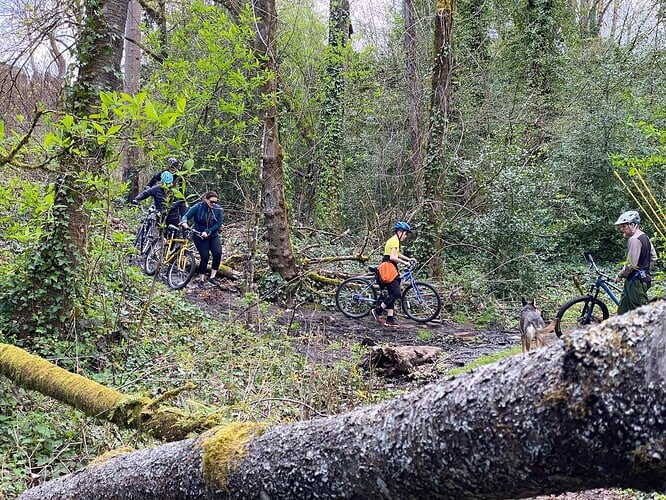 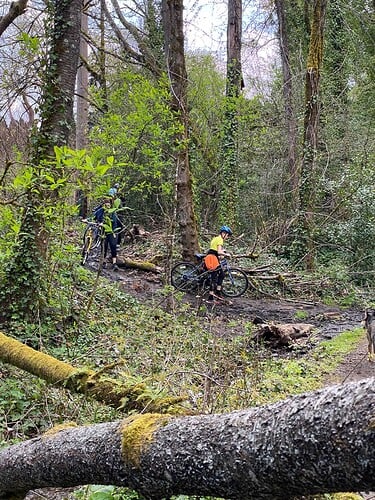 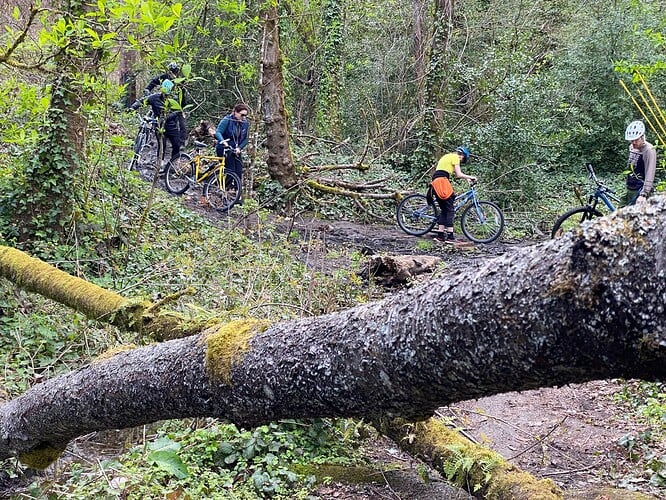 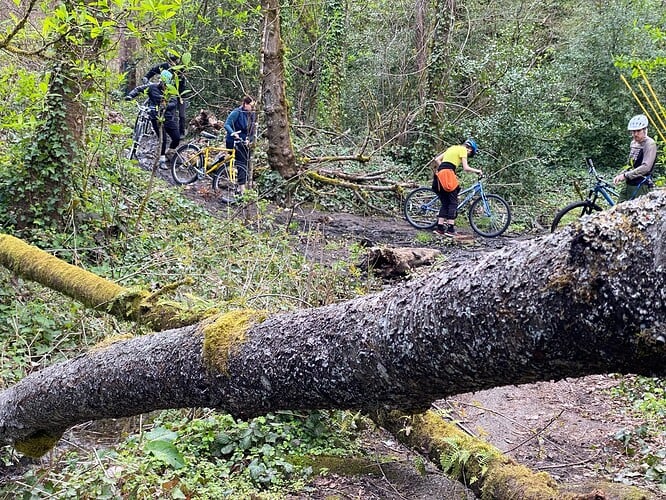 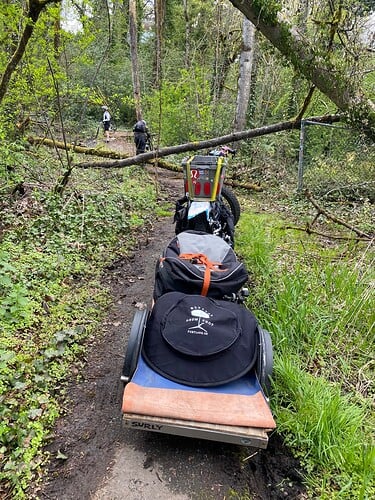 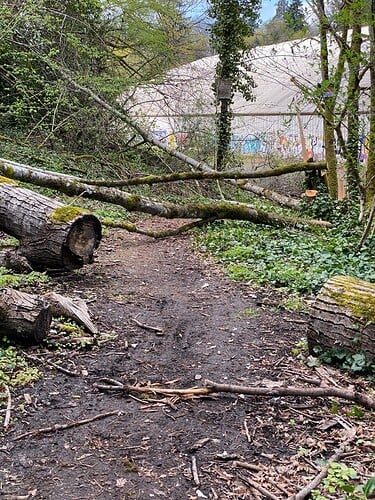 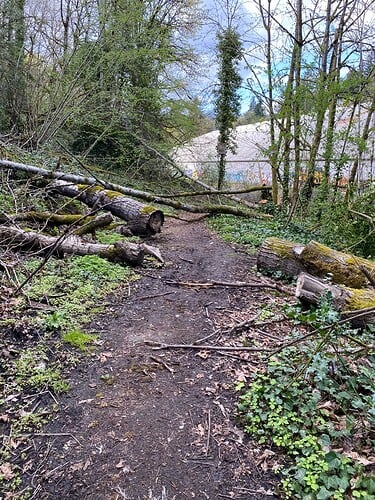 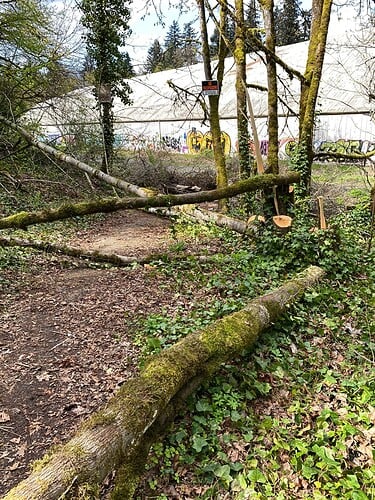 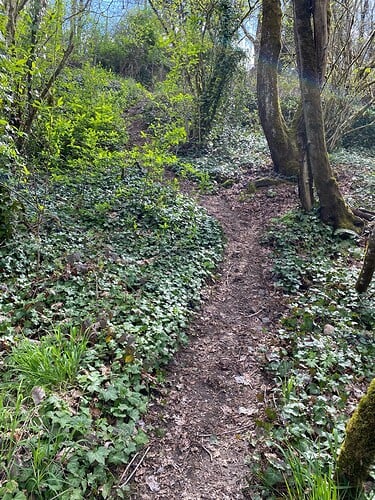 The final is about a 30% grade. I had no options but to turn around with a trailer in mud, dirt and trees. 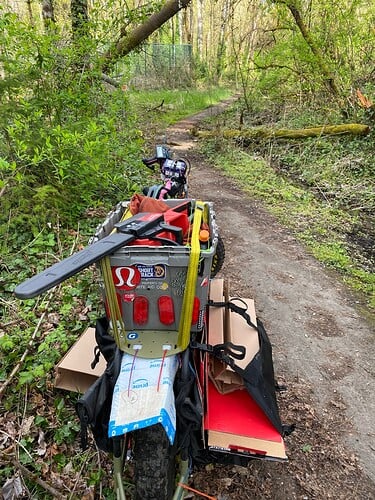 Well at least our taxes are low.

Where were the orange cones? Is this related to the utilities work being done that there was an article about a while back?

I encountered tree trimmers last weekend with giant boom trucks that required us to pass on the narrow grassy shoulder. I’m guessing PGE hired them given the adjacent powerlines and planned upgrades and they didn’t get the memo about posting better detours. 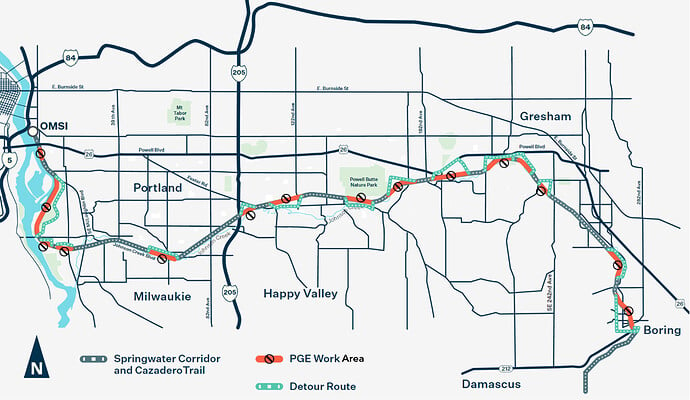 PGE project will lead to over a dozen Springwater path closures from now into...

Portland General Electric is upgrading transmission towers and the work will lead to several closures of the Springwater Corridor path from now through mid-March. A PGE spokesperson says path users Read More »

The orange cones were right where 37th meets the main trail, and as you can see they lead you down to nothing but mud, dirt, and downed trees. And an improbably muddy climb back to the trail on the other side.

I navigated one of those last week, it wasn’t too bad other than waiting for oncoming human traffic. What I experienced yesterday was unacceptable.

It’s hard for me to be surprised at this. There’s no active management of the MUPs at this point. I’m just happy they put sone cones up to save people from falling branches. 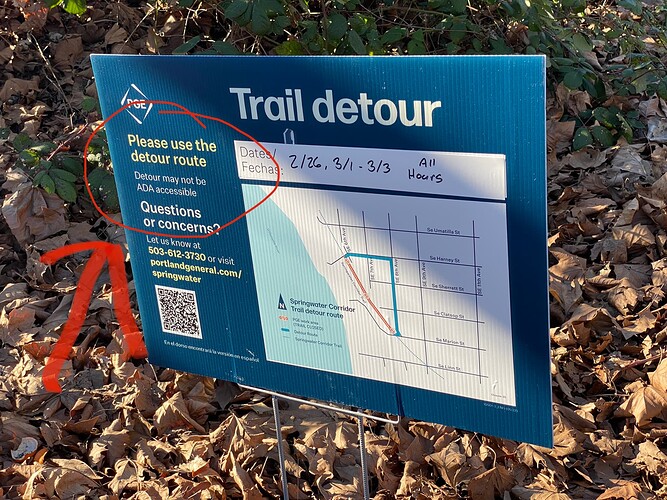 This is a sign from another location of the PGE work. Note it states that detours may not be ADA. Is this legal?

I know when there is a Pbot project on a Greenway or bike lane that they are legally obligated to provide and sign for the bicycle detour. I have called this in to 823-SAFE before and found the detour signed the next day.

Do bicycle riders have more rights than what the ADA requires? This is an equity issue. I routinely see some of the same people on the Springwater section where the detours were coming up, who use either a walker or a wheelchair. I also see baby strollers, kids in bike trailers or Bakfiet cargo bikes, etc. Will they be unable to get through on the detours?

A similar question I have is, for example, since the underpass along Powell Boulevard under the railroad tracks at 17th Ave. is along a state highway/ODOT facility, and is in fact a MUP, is this not a transportation corridor that is required by law to be maintained passable and ADA accessible For all active transportation users? Does ODOT get federal funds to help maintain Highway 26/Powell Boulevard? If so, they should be obligated to keep that MUP clear 24/7/365, especially with the Bob Stacey Overcrossing elevators out most of the time. Photo taken yesterday: 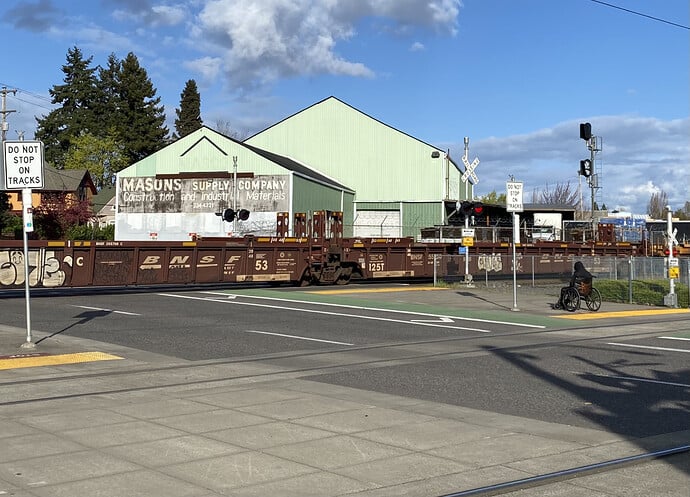 I remember hearing that the reason the Esplanade was required to be kept open 24 seven 365 is because federal funds were used which made it classified as a federal transportation corridor and therefore could not be closed. (Digression: except for the section that goes past Omsi that they close annually for their Maker Fair. That actually is Omsi property right down into the river and under the water. I suspect their annual closure may have something to do with protecting their property rights. Advocates: remember this when I am gone, so you can advocate from open passage on the banks of our waterways.)

I recently reported a MUP completely blocked that had it been a motor vehicle lane it would have been urgently cleared that same day. Instead, even though I sent a photo, they had to g o o u t a n d i n s p e c t i t, f o r m a c o m m i t t e e , . . . . - OK a bit of an exaggeration, but it is still not cleared and is a hazard to bicyclists and pedestrians. 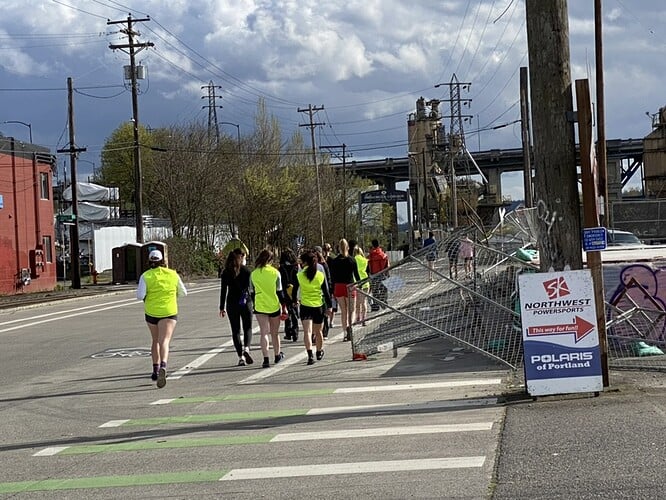 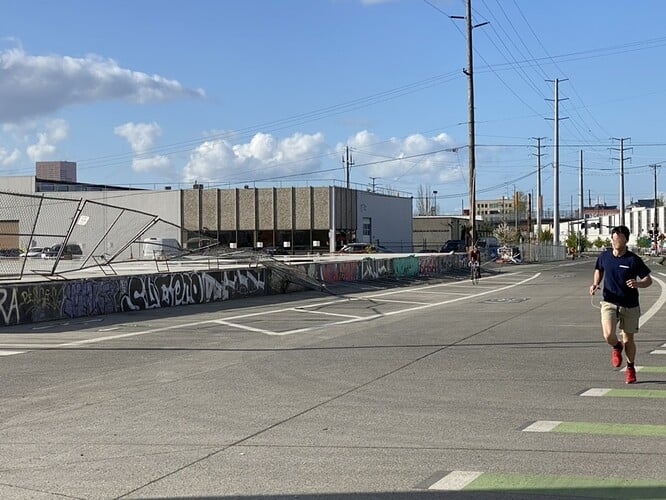 Any insights on this of obligation to keep MUPs clear and ADA, anyone?

I don’t think the ADA is enforced in Portland. Have you seen how many public sidewalks are blocked by tents? No one seems to care.

Oh, but there are laws that are enforced for those of us in traditional housing. If I had piles of trash and human waste in my front yard I’d be fined by the City in no time.
But campers are allowed to do as they wish out of a false sense of “compassion”. At least that’s what the do-gooders keep telling themselves as they pat themselves on the back.

Yep, the homeless “advocates” have pushed “pathological compassion” and it’s been adopted by the city and the county to a large degree. It is actually harming the very people they are purportedly trying to help. It has lead to inhumane conditions for the unhoused and destroyed livability for all. Just take a walk along the I-205 if you are in doubt.

If they weren’t going to clear that “alternative” trail, Asplundah should have closed that access altogether and rerouted up that steep hill, @ 37th to Crystal Springs Blvd. , into the Reed College neighborhood.

Went through there yesterday around 3:30, Asplundah had a huge truck on the bridge that was just pulling away as I got there. I didn’t see any indication of what or where they had been working.