I just motorcycled the Columbia River Highway from Glenn Otto through to the Stark Street Bridge and saw barriers being erected on the river side of this road. This is terrible for bicyclists! I bicycle this often and always speed through the barrier sections because of the narrowness of the bike lane there. Now, MOST of the southbound side is going to have a barrier!

I know MANY people bicycle this up and down. Perhaps someone has more information on this project?

Is there a plan to put a bike path on the other side of the barrier? Anyone know who is doing this construction? Is it ODOT? What’s the final plan?

Just saw this thread, seems like it’s to block parking that was (supposedly) already prohibited:

Interesting. I was just out there Sunday and saw the a-board barricades. Just looked to be preventing parking in the unpaved turnouts and I didn’t think it was that big of a deal. Maybe they’ve fortified it even more. Thanks for the heads up.

If new barricades create narrower conditions for bicycle riding the State will have to answer for it. This is a vital bicycling route and we won’t accept any further decline in conditions. If someone has photos or video please share it. I will probably be back out there in a week or so and will take a look for myself.

As for the work itself, because it’s likely considered some sort of emergency measure I doubt there’s a formal project behind it. I’ll sniff around a bit.

Yes, these look like they are intended to prevent parking. While they will eliminate the occasional car backing out of a spot in front of a cyclist, they severely limit the amount of road available to bicycles to the right of the white line. I biked this section this morning and tried riding along a section of this barrier. I don’t like it. The “flare” at either end of a section suggests that what you see is what you get. There won’t be a bicycle path on the other side of the barrier.

Here are some pictures. Note where the riders coming up towards me are riding. 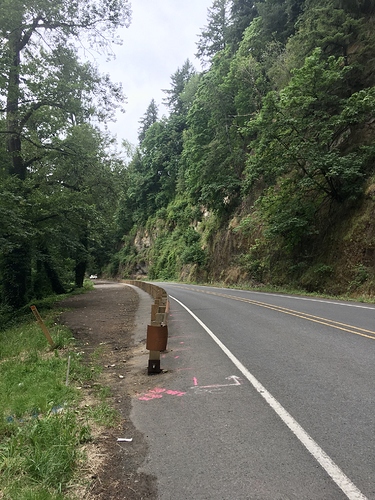 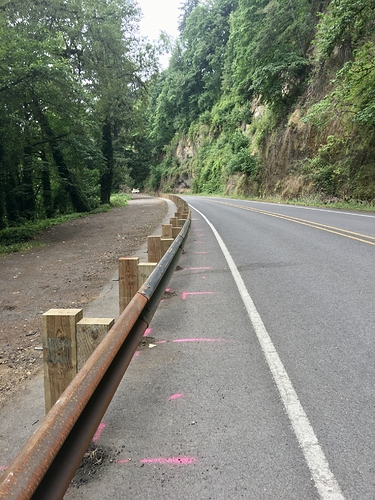 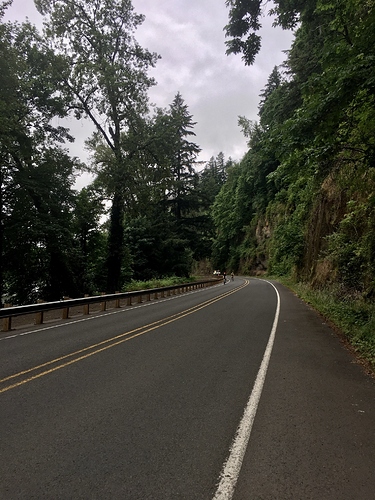 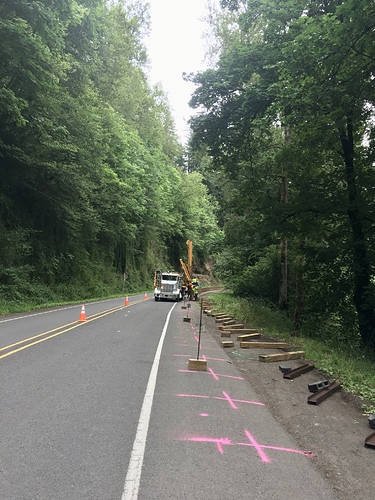 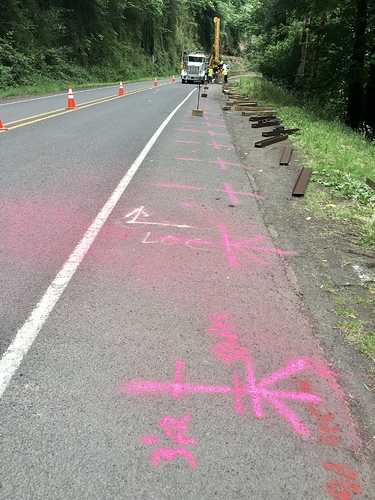 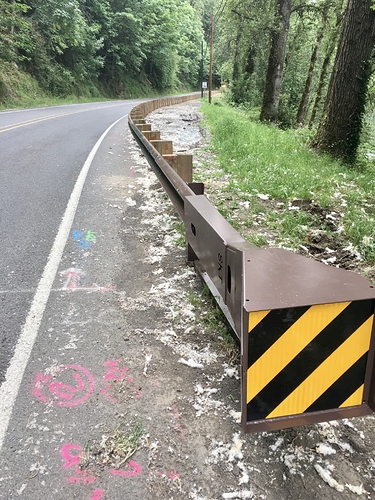 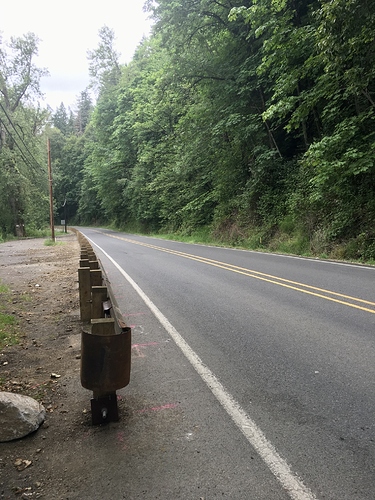 Wow, that hurts to see that pavement getting filled with posts and guardrail. I wonder why the placement is so close to the fog line? It would seem there’s room to put the posts further back off the pavement. Maybe the worry is if there’s “almost enough” room that people will park there anyways? This seems like some kind of contractor fail, that won’t have a good resolution.

Yeah that’s a pretty significant reduction in bike lane width. Bummer for sure.

There was some blame to the contractor for bad paving on the shoulder of Hwy 101 a few years back. Even in that case, ODOT was where the responsibility ultimately lay, and this case seems to me even more about ODOT. The plans/specs, and the job supervision, should have both caught this and nixed it. This strikes me as quite egregious…intentionally making the road more dangerous to vulnerable users, even though it is known as a popular ride. I don’t understand why ODOT does not review every road modification for impacts on use by bicyclists (and pedestrians, and heck, equestrians and anyone else who uses public rights of way), and why the reviewers and inspectors are not highly sensitive to use by vulnerable road users.

When riding from Lewis & Clark to the Stark Street Bridge, the first section of barrier is quite unfortunate because it narrows the road quite a bit. There’s already no pavement to the right of the white line in the other direction so imagine squeezing a bicycle on either side and traffic in both directions there. It’s a tight squeeze around a bend where people tend to go too fast for the road already!

Thank you so much for sharing these. I agree that this is a problematic reduction in lane width and AFAIK there was zero public outreach before doing it. I’ll look into this for a story asap.

OK here’s what ODOT just shared with me:

We put the new barriers in place because of problems caused by illegal parking and camping along the shoulder. We tried to position the barrier so it offered more space but were constrained by a buried gas line. Hence its location. This effort is along three sections of the Historic Columbia River Highway, each about a thousand feet long.

Yes, we certainly understand how this effort reduces space available for bikers and other users. But illegal campers were already causing problems by blocking the shoulders and sometimes the road and creating significant health and safety hazards, among them litter and other debris and refuse. This effort makes the road safer for bicyclists and all other road users.

What do you all think of that rationale?

Where are the construction markings for the gas line in those photos?

Even if there is a gas line there, why not put the Armco on the other side of it, out in the dirt?

And if a barrier absolutely must be placed over that gas line that just happens to run right along the edge of the paving, why not something that doesn’t require drilling? Like Jersey barriers or ecology blocks…

PS: The real solution is fixing the wealth and health system of our country so that living on the streets goes away, and we can let someone enjoy a pull-out along a country road in peace.

The statement, “illegal campers were already causing problems by blocking the shoulders and sometimes the road and creating significant health and safety hazards,” applies to Marine Drive. While there certainly was illegal camping and trash and so on on Columbia R. Hwy, I never encountered it in the road or shoulder and I ride this frequently as I regularly include this in my evening commute on hot days.

Another problem with this barrier is that it is so low. The white barriers already in place on Columbia R Hwy are much taller. If you go into the new barrier for whatever reason, chances are you are going OVER IT and if any speed is involved you will be mangled by the posts on the other side. This is also a hazard for motorcyclists who will be thrown from their motorcycles by such barriers.

The logic provided seems like an after the fact justification. If the gas line was really an issue, then why wasn’t a bicycle lane on the opposite side of the barrier part of the project?

We put the new barriers in place because of problems caused by illegal parking and camping along the shoulder.

Another instance of them permanently closing public space due to a temporary public nuisance. This seems like an odd response.

Can we expect the I-205 path under the Sandy bridge to receive the same treatment?

OK everyone… Just posted a story about this https://bikeportland.org/2020/06/29/new-odot-guardrail-on-historic-highway-makes-cycling-more-dangerous-317801

Thanks for the article. I just contacted ODOT on the matter via the link you provided.
https://highway.odot.state.or.us/cf/comments/comments.cfm

If you go into the new barrier for whatever reason, chances are you are going OVER IT and if any speed is involved you will be mangled by the posts on the other side

When it comes to height, better lower than higher. If you’re in a situation where you need to bail, way better to go over the rail than be pinned against it or trapped on the wrong side where you get run over.

Having said that, I still don’t like these barriers and consider them a hazard. The number of lanes that butt up against curbs and rails in this area blows my mind.

This is good, I find it safer with barriers fpr everyone who will pass by this road.

I feel less safe when I’m forced into the lane and have no escape route to my right, especially on a winding two-lane where cars often go over 40mph.

Thanks again @amadeusb4 and others on this thread. Just reported that ODOT will REMOVE THEM!!

This is good news, but clearly they want something there so how is the project going to proceed from here? Also, this and the back and forth construction between PBOT and ODOT on the Rosa Parks bike lanes last year gives the impression that ODOT’s disorganized. This installation, the correction and final implementation will cost money that could have been spent better.