Been watching progress on the two-way protected bike lane on N Greeley and the folks at Adidas (who are paying for and building the project) have really done something wild with the section of bike lane in front of their offices. It’s millions of tennis ball-green circles!

So the question is… What should we call this thing? Funniest suggestion I’ve heard so far is “Greenley” ! 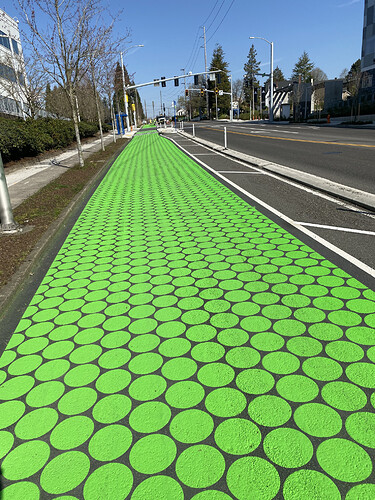 I don’t know what to call it, but the appearance is striking. Looks sort of like a green slime honey comb to my eye. Greenley seems as good as anything. And that sure is a nice, wide bike facility. Protected by a continuous curb, to boot. That’s some really nice infrastructure.

Did they use grit infused thermoplastic to apply the color? Looks pretty well textured, whatever it is. After what happened with the striping on Williams a couple years ago, I’m leery of third party contractors applying atypical paint to the road surface.

A week ago, I rode up Greely from Interstate. When I got to Going there was nothing to tell me that I should cross diagonally to the new 2-way bikeway so I kept going. The bike lane disappears and I was riding in the traffic.

I hope they’re planning something to tell northbound folks to cross at the bike crossing.

I rode uphill today and the situation remains the same. It has been that way for over a month. Ironically, Roger Geller, Portland’s bicycle coordinator, was coming downhill and we chatted briefly after he was able to cross. He acknowledged the new infrastructure isn’t complete and is confusing for uphill riders. I’m optimistic that it will be finished soon, and definitely like how it is shaping up, but it was a little premature to call this mission accomplished.

I’m confused - has the bike lane on Greeley north of the going intersection been removed?
I haven’t ridden there for a year-plus but there was a post-delineated bike lane (north of the ramp up from Going) when I was there last.

The issue is that (last time I was there, a couple of weeks ago), there was no signage to tell bicyclists how to navigate this intersection. When I got there, I continued north as I’ve always done, and end up in the only traffic lane.

I rode this route yesterday 4/22 and it is still the same. There is no safe way to cross three lanes of moderate speed traffic to get to the two way bike lane. STILL!!!

I rode it yesterday, southbound. In that direction, there is a sign. As I went by, I noticed that the northbound path has an old sharrow pointing straight north. That is completely misleading, since the route is now from the southeast corner diagonally across the intersection to the new 2-way path at the northwest column.

Amy, the traffic lights at that intersection have a new bikes-only phase during which you can cycle diagonally across the intersection in safety. But when you ride northbound, there is no way to know that.

Pretty wild biking over this. It has a kind of strobe/disco effect if you look at it just right.

I live on N Atlantic Ave and have biked the Greeley bike lane daily since 1992. Back when there was no bike lane. Things improved dramatically when the lane on each side of the road came in.

I must say we had a good thing that got messed up when both lanes were shifted to the east side of Greeley. The tall Jersey barrier gives bikers no other option than to run the gauntlet of homeless, dogs, rats and trash adjacent Hazelnut Grove homeless camp. Before, bikers could get to Interstate from Greeley alongside traffic and avoid this mess.

Today, I was stopped by an Aspland Tree Service crew maintaining vegetation at the homeless camp. They had their equipment parked in the bike path with no room to pass on either side. They directed me to hike up the hill, through blackberries and next to the campers around them and back onto the path. It’s not their fault, the City has removed all options to cyclists. You have to go this way or else. A detour sign would have had to be posted way back up on Greeley and Willamette.

As a motorist, this new bike path creates another signal at Greeley and Going that slows the already slow northbound Greeley traffic.

Is this really the best use of our bike transportation money? I know funds were donated by Adidas, but let’s put a little more forethought into our spending.

This “strange” use of funds became crystal clear when I traveled over the I-5 bridge to Vancouver last night. Again, I have been doing this since 1989 and to my recollection, there has not been one improvement to the way bikes get to Vancouver. This is a major route and as more people buy and use electric bikes, this route could become more popular. I know there are other jurisdictions involved, but 30+ years of dicey bike lane to get to Vancouver is enough time for some improvements.

I know you are doing your best, but if it’s not broke, don’t fix it. Thanks for your time. Todd

Wow, Todd! I’m in agreement entirely. I have been blocked so many times near the Hazelnut neighborhood. This path was never intended to be a driveway for residents, access road for large trucks, and port-o- potty emptying trucks. I initially asked if one of those large barriers could be removed to allow access to the bike path NW of the neighborhood. This would be a cost effective solution to the problem. Unfortunately, this suggestion was not appreciated by those who may have been involved in the design of the project, and the answer was NO! I was riding southbound last week and noticed a cyclist heading northbound in the auto traffic lane. I think maybe, he didn’t know how to access the bike path, or maybe it was blocked, but my solution would alleviate these problems. Maybe if more residents, and users of the path band together, we might be able to persuade this option. Anyone else??? Amy

I would strongly support a return to the old configuration. Short of that, installing hardened bollards to block motor vehicle access would be another possible solution. I don’t think removing one of the jersey barrier panels would be my first preference, but it might make things slightly better than the current configuration.

I may be a bit of an outlier, but the more I bike around Portland, the less that I like any of the hardened separated bike infrastructure (except for Rosa Parks and Beaverton Hillsdale Hwy). I don’t consider the Greeley bike path to be a usable option, and I lately have been opting to take the lane on the Morrison bridge instead of using the separated bike path on that bridge.