Well, it was probably inevitable, but in the “Dirtlab at Gateway Green” Facebook group there have been several reports of park users finding fliers on their cars instructing them not to park in the Maywood Park neighborhood-- which as you may or not know, is its own city, having left Portland in an effort to block the construction of the I-205 freeway. 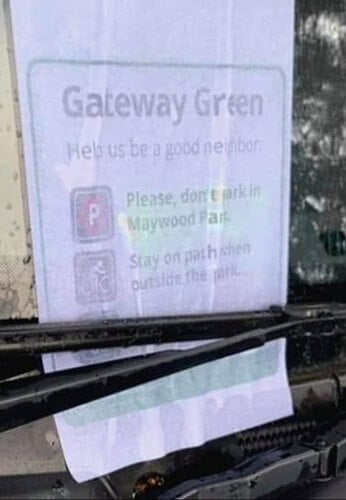 There are also statements from Linda Robinson of Friends of Gateway Green indicating that Maywood Park residents are poised to enact new parking regulations in response.

It’s clear that Maywood doesn’t want MTB parking in their neighborhood. Meanwhile, riders who drive to Gateway Green don’t feel safe parking closer to Gateway Transit Center. Which is, in my opinion, a somewhat valid concern given the staggering level of trash, property crime and general decay that the city’s allowed to snowball.

Another major problem is plain old awareness: few people seem to know if they’re allowed to park at Fred Meyer or the Trimet Park-and-Ride. Of course nobody wants their car towed, either.

Personally I live close enough nearby to “ride to the ride”, though 205 path safety concerns often make me think twice about it.

Any thoughts? Would love to hear what Maywood residents think, too.

The whole area is scary, I haven’t been back to ride there since I saw some guy 5 feet from the trail in Gateway Green shooting up. Maybe if it wasn’t such a sketchy area more people would ride their bikes there or park closer.

PBOT has no jurisdiction in Maywood Park, MP left the City of Portland in 1967. They can enact their own No Parking area along NE Maywood Place if that’s what they decide to do, and I assume that also means that they can contract with a towing company to enforce it… just like any other city in Oregon.

Meanwhile in the Dirtlab group, the gravity sports crowd is having a hard time understanding this. (Maybe a few too many concussions?) Right now it’s just fliers on windshields but apparently Maywood Park is acting fast to address the issue. I think there could be an opportunity to work something out with 'em, but the attitudes I’m seeing in the bike community are hell bent on framing this as some sort of overdramatized David vs. Goliath conflict… guess which side they think they’re on?

I’m with you on cleanup & enforcement. The 205 path is unsafe and often impassible both north and south of Gateway Green. I’ve had the same experience multiple times, btw: people in the act of sticking needles in broad daylight, and that says nothing about the numerous times I’ve been forced to come within arm’s reach of a hostile, possibly mentally ill (and potentially armed) person who has no business loitering on the trail, erecting structures, building fires directly on the asphalt, etc.

Alas… it stopped being shocking long ago; city hall’s leadership has done a great job cementing drug abuse and mental illness as pillars of the everyday Portland experience. I’ve begun using alternate routes to get to Gateway Green even if they’re more dangerous and indirect. Used to take 99th Ave but even that is becoming quite dire: burned out cars and RVs, piles of trash and junk trucks, random people milling about giving you the stink eye for daring enter their pseudo-autonomous zone.

The irony, not lost on me, is that both Maywood Park AND the Gateway Green MTB community ultimately share the same frustrations: the City of Portland’s failure to provide a safe, livable city. There’s common ground, and I hope they’d find it.

Explain like I’m 5: Why do the residents care if people park there? There are literally thousands of open parking spaces there so it’s not like they’re unable to access their homes. What do they lose when visitors park there for a few hours? To me this seems like unvarnished misanthropy or xenophobia.

Why do the residents care if people park there?

If you’re a regular reader of BikePortland you should be well aware that cars are evil and we need to eliminate all street parking. Ha ha, kidding (or not).

I can’t really speak for Maywood residents, as I’m not one… but it seems like for the last 24 years they’ve enjoyed a quiet street that nobody uses unless they’ve got business in the neighborhood. More cars means more speeding, for one. Probably a bit more noise, more littering. Overall I think it boils down to the first part, really: they don’t want to be a parking lot for a Portland park.

Right now the street is downright bucolic compared to a lot of the Portland neighborhoods around it, and as their own city they’ve got a unique position to preserve it; every time I pass through the NE Maywood Place segment of the 205 path it’s like an oasis. If you wanted to sell a Gateway Green parking ban, you’d probably only have to utter two words: Portland Creep.

I’m not really rooting for them, especially since I’m a cyclist and mountain biker myself, but having witnessed the decline of livability in my own neighborhood, I’m definitely more sympathetic to their plight than I previously would have been. As a somewhat politically / civically wonk-ish person it’s also fascinating to watch how an independent enclave deals with its issues while Portland is busy finding exciting new ways to shoot itself in the foot. Imagine if your neighborhood didn’t have to kowtow to a city councilor who doesn’t care about 70% of the city and doesn’t even want to manage the bureaus assigned to them!

Maybe install parking meters with residents of Maywood exempt? I’m sure people would pay to park there.

Took my 5 and 7 year old to GG yesterday. We parked in the Transit Center which I guess I might not do on a weekday, but on a Sunday who cares?

We rode down the 205 path with no issues. In the past we have encountered unhoused individuals, but anything on the 205 path pales in comparison to scene outside my wife’s office in Old Town.

I wonder If my neighborhood in Portland could secede? That sounds nice.

I’m sure people would pay to park there.

I haven’t seen any indication that revenue is an issue, and besides: who enforces it? They’d need to hire an outside resource to conduct parking enforcement. Doubt it would be worth the cost, but it nicely illustrates the larger problem: the City of Portland doing something that affects Maywood, which due to its small size has very few options available to respond or mitigate impact. If anyone’s wondering “why do they care about a few parked cars?”, well, this probably isn’t their first rodeo with COP.

In the past we have encountered unhoused individuals, but anything on the 205 path pales in comparison to scene outside my wife’s office in Old Town.

Squatting has rarely been severe around there, at least not directly on the path (look up the hill towards the Providence parking lot sometime) but go south of Glisan or north of the Maywood Park boundary and let me know how safe you feel…

The idealist in me wants to say that people should just ride their bikes to Gateway Green. The whole point of building the park was to provide spaces for people to ride on technical trails inside the City without having to drive to far flung locations. Now that we have it, why are people driving to it? Kind of defeats the purpose.
But on the other hand, I’ve had a number of close calls with campers who are literally living in the middle of the pathway. I personally know people that have been injured when people living on the path have crashed into them while they were biking on the 205 path in this very area. Other parts of the bike network in this area that are not MUPs/unregulated housing areas are substandard or non-existent. So I can see why people would want to drive to Gateway Green.
Seems like clearing and sweeping the pathways to make it easier for people to get to the park is the most straightforward solution. We have bike paths that were built for tens of millions of taxpayer dollars that are intended to lure people out of their cars and onto their bikes, and yet people are terrified to use them to get to recreation biking destinations. Seems like this is a serious problem. Portland should maintain the existing bicycle infrastructure before it goes about building new bicycle facilities.