I have a late 70s Bickerton Portable, free to a good home. 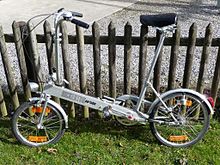 The Bickerton, also called the Bickerton Portable, is a portable aluminium folding bicycle designed by Harry Bickerton and manufactured in the UK between 1971 and 1989. After the end of production in 1989, the factory did not close its doors until 1991. The Bickerton was a portable bicycle launched when folding bicycles tended to be 20-inch (51 cm) step-through frames with a simple hinge, such as the folding variant of the Raleigh Twenty. The bicycle was made entirely of aluminium profiles, w...

It doesn’t look as good as the Wikipedia pictures.
It has been hiding in my basement for 35 years. Its cob-webby and dusty and needs work.
It is missing its chain, the dual purpose bag, and some minor fasteners and lock washers
You will probably want to replace the 40 year old tires and check the spokes.
But, it worked well until I had to lug my Kaypro 2 back and forth to work. It couldn’t handle well with that 28 pound load on the handlebars.

And free, because I’m 35 years older and can’t give it the love and care it deserves.
Contact me with any questions