I am moving into a new living space, and this bike was left in the yard at the house. Says Steve Wright on the top tube. Contacted the frame builder, and he didn’t have information for it. Ran the numbers, and nothing reported. Anybody recognize it? Know someone named Steve Wright who may want this back? 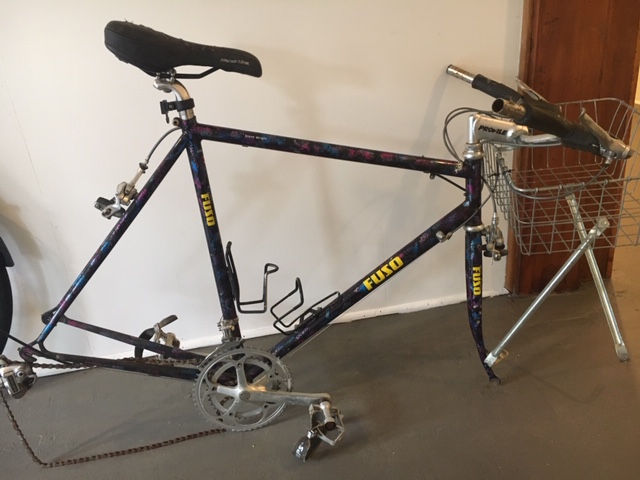 I wonder where the wheels are, maybe he left it because he don’t want it anymore. This bike doesn’t old though.

I talked to Dave, he doesn’t have any record of this particular frame. He posted it to a Fuso owners page, but no responses so far.

This bike doesn’t [look] old though.

For a bike made between 1984 and 1993 it looks darn good! It’s a bit of serendipity that it came into M. Stoic Wheel’s capable and honest hands. It also reminds me of the old saying about the cobbler’s children with no shoes.

I agree, jbuenavides, the circumstances do make me wonder about the previous possessor; whether they were the rightful owner…

Any resolution on this? Aren’t Fusos somewhat collectible?