Saw this post 11-28/21. Big fire on Springwater along with explosions and possible gunfire.
Between SE 128th and SE 136th.
Stay safe. Probably best to avoid this section of the Springwater.

Yet another big fire behind my home along the spring water corridor trail. Today the homeless people living behind my home along the spring water corridor trail started another huge fire. First we heard two explosions. Then there were flames and billowing black smoke. We called 911 and the fire dept was dispatched. While waiting I heard what sounded like gun shots. I called 911 again to let them know and was informed that police would not be dispatched because it was political decision and they had to take orders from the city in regards to anything related to the homeless. I asked “even if there is gunfire from them feet from my home and toddler?” I was told yes their hands are tied and it is a political issue.

Do you have a link to an article or post about this? 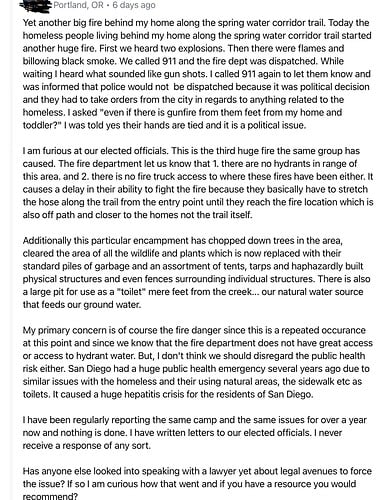 The hearsay claims about what 911 dispatchers said could be proved true or false by, possibly, FOIA-ing the 911 recordings. Ironically, if dispatchers really did say “it’s political,” that itself could be evidence of using city resources for propaganda.

The claims about non-ability/non-access to fight fires are especially dubious. They imply the city has carried a huge, known legal liability for decades.

What’s claimed about the site is more likely to be at least partially true. Photos or video would help, including by drone.

Would be interesting to determine just how much of this is noise generated and amplified by people addicted to sensationalism.

JDedd,
Sure if what you hear doesn’t fit with your narrative just try to discount it. Shouldn’t you be concerned about this community member and their fear for their family and their home? Instead you try to portray them as some sort of hysterical liar. Like they are going to launch a drone to take photos while on 911 hold with a fire next to their home and explosions occurring? I challenge you to walk into the site of the fire and figure out how you would get a fire truck in there! Your reply is very strange.

There would be no need to “take photos while on 911 hold.” Why on earth would you assume that?

Such a “big fire” or “huge fire” would leave a burn scar for months. The window for photos and video likely is now through Feb. or so.

Yeah, I would be concerned about the alleged community member except that the claims about what dispatchers said are beyond the pale and thus require evidence. (Surely dispatch is aware of the existence of pumper trucks, which can feed a hose on their own and don’t immediately require a hose to a hydrant.)

Those claims put the community member’s post into question for anyone who’s not a feckless rube.

Well, go check it out if you are such a disbeliever. Just be careful. Me, I’m concerned about this community member and the community members who can’t access our public trails due to lack of safety.

Since you amplified the claims of the NextDoor user, the burden of proof lies with no one but the two of you. Let your “concern about this community member” guide your actions.

Can you establish that “community members can’t access our public trails,” presumably between 128th and 136th? Even you didn’t claim this in your earlier posts.

Oh brother. Just go check it out and see if you’d want to have families riding their bikes down the trail there. It’s a mess and unsafe.

You moved your goalposts again: Was “can’t access,” but now you’ve retreated to “mess and unsafe.”

This is part of why you’re not trusted — why you get nearly no Likes on this type of sensationalism-amplifying post, and why nearly no one engages with you on them except to call you out.

Jay,
Have you been able to visit this section of the Springwater yet? I’d be interested in what you thought of it.
A news reporter is hoping to do a story on this. I’ll post the link when it comes out.