Drive however you want in Portland. Speed KILLS!

Unfortunately there has been a very large increase in traffic deaths in Portland. This has been worsened by the lack of enforcement as traffic officers have been eliminated due to police defunding. Then we get the “religious left” saying police are not the answer and effectively endorsing more death. Evidence has shown the Portland traffic police do NOT stop people in an inequitable manner but the far left progressives don’t want to hear that because ALL police are evil. They say use “Engagement” not “Enforcement”. But let’s face it that “rainbow and unicorn” thinking won’t keep people from speeding and killing pedestrians and cyclists.

Policing alternatives (such as speed cameras) are fine and may be even be better than live traffic cops BUT
you can’t cut traffic enforcement BEFORE having a viable alternative in place. It doesn’t take a brain surgeon to figure out that if speed limits and traffic laws are not enforced people will speed and drive recklessly and more people will die. SPEED KILLS! 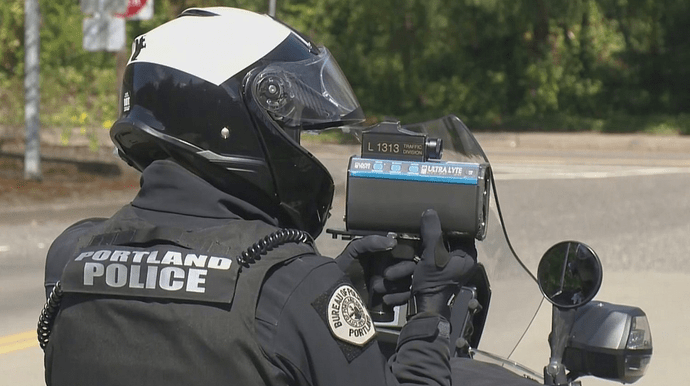 I can’t get this post out of my head. First, I absolutely relate to the frustration and fear about the nightmarish number of traffic deaths we’ve seen this year. I totally agree that speed kills! When a driver is going too fast, they often don’t see pedestrians, bicyclists, or other vehicles until too late. I’ve been shocked this past year by countless drivers blowing through stop signs, lights, weaving through lanes, and generally driving recklessly.

My theory, supported by a quote in the posted article, is that speeds have gone up because there have been fewer people driving during the pandemic, so there’s been less traffic to slow people down. According to the interviewed officer “commutes went down and bumper-to-bumper traffic disappeared, the speeds skyrocketed”. Which totally makes sense to me.

What I can’t stop thinking about is OP’s assertion that the speed increase is somehow the fault of the “religious left”, a.k.a. people who advocate for cutting the police budget.

My understanding of the Portland Police budget cuts so far is that funding to three programs have been cut, none of which are traffic enforcement. (Gun Violence Reduction Team, School Resource Officers, and the PPB Trimet transit police). The additional proposed cuts to the budget were voted down by city commissioners.

Avery,
Thanks for your concern about traffic violence. I agree with you it’s horrible.
I agree with the original post. Your understanding of the police budget cuts is not fully complete.
Yes, the Gun Violence Reduction Team, School Resource Officers, and the PPB Trimet transit police was cut by the politicos which was bad enough. However, police funding cuts and lack of full staffing forced the Portland Police Bureau (PPB) to make further Draconian cuts in order to preserve force response adequate for responding to violent crime and threats to life. This required eliminating ALL the traffic patrol officers in addition to disbanding the Bike Theft Task Force. It was not as you state that the PPB was “de-prioritizing” traffic enforcement. It was the only way for them to provide even a skeleton crew to respond to 911 calls, repeated anarchist violence and other immediate threats. Although I am completely open to alternative responses to 911 calls that do not require an armed officer (such as mental health crises, welfare checks, etc) cutting the PPB budget BEFORE another system is up and running was sure stupidity by Portland city council members. The CAHOOTS program of Eugene is used as an example but it is run in close cooperation with the police department there and something like this needs to be in place before allowing anarchy to reign. Many of the “far left” are more interested in being “police haters” and defunders than actually doing the hard work of police reform and providing for community safety. Just look at what has happened in Portland, skyrocketing murders and shootings, repeated vandalism, drastic increases in petty crime and tolerance and lack of prosecution of all but the most heinous crimes.
Not all liberal minded people support anarchy. I am a Biden loving left of center Democrat but I want someone to answer my 911 calls, have speeding enforcement in my community and not have to worry about my families’ safety on a daily basis.