I’ve read that some 70% of dead pedestrians for whatever time frame measured in media coverage was homeless.

While pedestrians have the “right of way”, I recently observed this male transient crossing Foster in the path of the red arrow causing a car that was turning left into Foster from Powell westbound to have to stop. It was in the broad daylight and the driver was just getting moving so they noticed and stopped. The male transient chose to do this rather than just wait and cross at the crosswalk very short distance away in a responsible manner.

I am seeing a lot of loaded language like “vehicular assault” and such but I truly wonder how much of pedestrian incidents can be significantly blamed on unreasonable conduct that’s analogous to sticking your finger into a running blender by the deceased pedestrians or bicyclists. 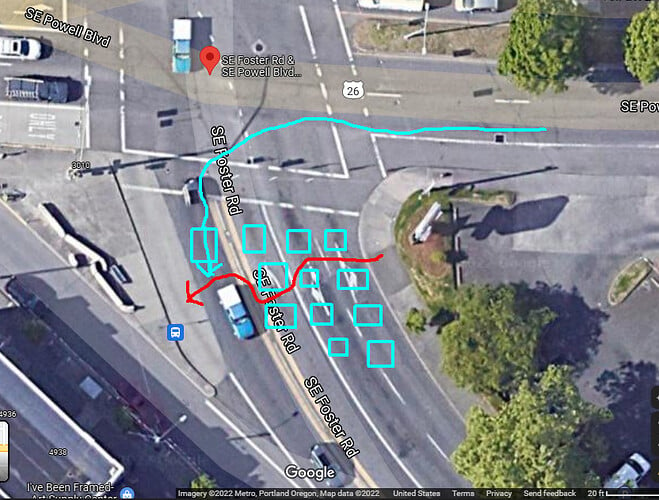 I agree with you completely. It’s just a fact many of the addicts’ brains don’t function in such a way that they can recognize the danger from wandering into oncoming traffic.

I too agree people’s own behavior can be a lot of the problem.
However, I’ve taken a different track with my own driving. I presume that at any moment someone could dart out in front of me. I constantly scan sidewalks, parked cars, etc. for someone who isn’t following the rules. Will it guarantee that I won’t have an accident? No, but I’m trying to adjust my own driving based on the dangerous conditions that are now routine.

I think a legislative change is needed to indemnify drivers and their insurers from any liability beyond actual medical expenses and even the medical expenses should be limited to the amount of negligence attributed to the driver; and the ability to place liens on the miscreant pedestrians against future settlements they may receive from the government for “unfair sweeps” and what not to cover the losses sustained by the driver.

If you’re not at fault in a collision, you’re already FULLY indemnified. That’s how torts work.