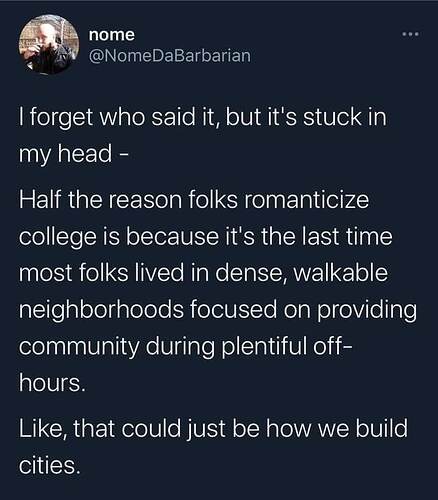 That’s true, but…college was also the last time most people didn’t have jobs, spouses, kids, aged parents, bills, responsibilities, permanent housing, possessions, and the knowledge that no one else was going to pay their way in life. Most people don’t choose or can’t afford to lead the carefree life of a college student for their whole lives.

Yeah, and back, while in college, being able to go out on 30-50 mile bike rides every day between classes out on the backroads around my college town. Never had anyone try and run me over!
Then job, family, adult life interrupted!

I went to a commuter university where the campus was pretty cleared out by 3pm most days. I worked three jobs to pay my tuition and did my best to schedule all my classes for MWF from 7am to 10pm so I had Tuesday, Thursday, and the weekend to work. I never got that romanticized college experience – and I was locked to my car during those years. However, after college is when I lived in the downtown core of that same city, (closer to campus than when I was a student) so I could live near all the things I liked about that downtown core. I walked to bars and clubs at night to see live bands and I could saunter home on foot. I rode my bike to get groceries. I only needed my car to get to work (no transit option) and visit far-flung friends. I had gotten the bug for urban living with that and it’s what brought me to Portland 20ish years ago.

I like that quote. Obviously colleges are their own unique thing, but the environment of a college (the campus itself plus the adjacent community) typically has the density, walkability and community mentioned, plus a lot more other characteristics that make a community a good place to live–a main street with local businesses, outdoor gathering spaces, communal greenspaces, pedestrian-focused streets and paths, residential and non-residential uses close together…

To me, the outdoor spaces of colleges (communal plazas and park-like spaces around which buildings are clustered) are what make colleges especially livable and pleasant in comparison to other environments where people live and work.

College campuses and their nearby surroundings are usually pleasant spaces to be, and college towns or neighborhoods are often attractive places to live and work for people not associated with the college (per squareman’s comment).

Believe it or not, you just described downtown Gresham.

I actually DIDN’T believe you, but since I haven’t been there, I looked it up. At least based on what I saw online, it really does have several of those characteristics–not a standard setter for urban living, but certainly much better than its reputation.

Vancouver, WA is another place that I think is better than its reputation. Portland to me is worse than its reputation. Even with colleges here, Portland isn’t great. PSU doesn’t have a great urban presence (maybe because so many students are older and commute). Lewis and Clark, Reed and UP all seem self-contained and isolated. The campuses are beautiful, but Portland doesn’t seem to have any thriving “university districts” the way many other cities with colleges and universities have. Or maybe college students here are just more woven into the general fabric of the city?