Very happy to see PBOT and Portland FD cleaning up the big camp/mess at Marine Drive and 205 path (by Home Depot). Good job having health and safety crews along for this work! 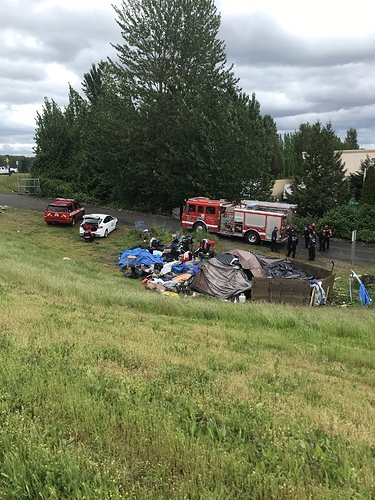 A guy flashed a bowie knife at me last year in that spot. He’d caught my attention as he scaled the fence into the Home Depot lot, I didn’t say a word or confront him in any way. I was up on the berm / path on my bike so no real immediate danger, but… still a bit unsettling.

In the long run, cooperation of Home Depot, 7-11 and their property owners would be essential in the long run. This strip of road is open to authorized vehicles only and normally closed, however transients are driving their vehicles in here from the Home Depot parking lot by driving on the sidewalk/MUP. There is a slot for a bollard at 45.570758, -122.547162 but last I was there, it was not installed. Yes I have witnessed a transient related vehicle driving into the camp site from the MUP via the Home Depot parking lot.

By installing a bollard, it effectively seals off the loading dock for their stolen property, tents, etc and help slow down the movement of stolen property and ingestion of garbage and if we can get Home Depot to improve surveillance and institute towing of vehicles associated with camping, word would get around and help mitigate the issue.

Was it actually cleaned up? I don’t imagine that the fire bureau does clean up. Perhaps they were attending to the transients.

These are from sometime this year during the pandemic:
So many people that have nowhere else to go and possibly suffering from diabetes /s 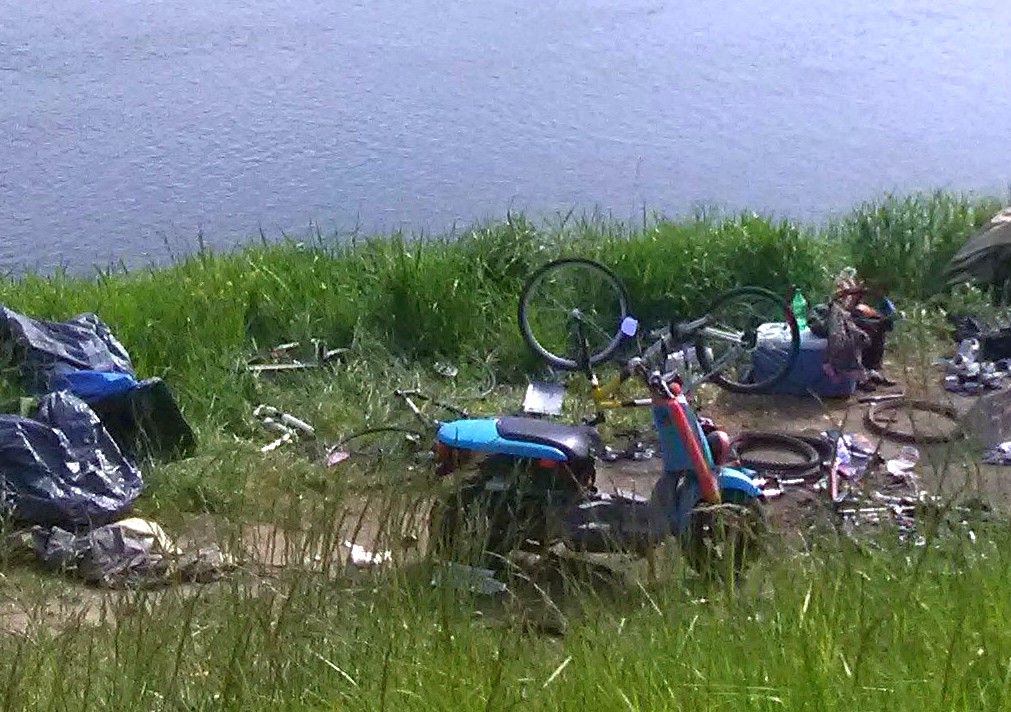 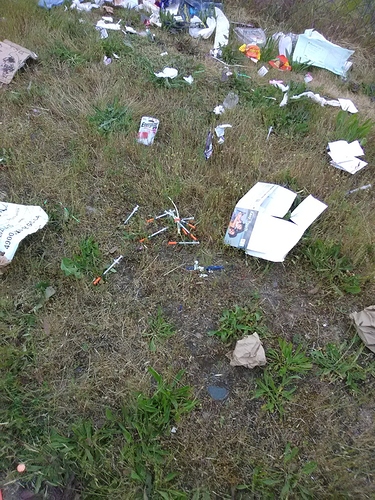 So it’s been a year since this first came up. Yes, what a year. That said, rode this a couple weeks ago. The camp is double in size. there was a car and a truck on the side of the path south of the railroad overpass. There were, i’d guess, 30-40 bike frames hung on the cycle fence on the west side of the path and around the camp. The path between the debris was narrow and not straight. Very intimidating, frustrating, depressing, and any other adjectives you would add. We’ve started turning west on Alderwood to Cornfoot to get home.

With all due respect and empathy for the un-housed, can’t we do better? With 33rd between Columbia and Marine Drive, the enlarged camp along Marine Drive east of 205, and this area, it makes downtown and Laurelhurst look pristine.

More interviews need to be done with campers. What do they desire? Can we then try to establish those services in uppity smug neighborhoods like Eastmoreland? The problem with that neighborhood right now is the lack of services that makes these areas rather inhabitable to urban campers.

Creating services do not multiply the homeless, but simply cause some of them to migrate over to areas that were previously lacking services and I believe it helps create more homogenous climate rather than having them disproportionately concentrate in some areas. Essentially, this means have the whole city turn gray, rather than have black dots on a white canvas.

Near the personal houses of executive directors of non-profit feeds like Pot Luck in the Park, and Operation Nightwatch should absolutely be considered for expansion of homeless services if they happen to live in “service deserts”.

I haven’t been on the I-205 path since September. Sounds like things are continuing to spiral out of control there.

It’s one thing to have uncontrolled camping in public spaces. That may be irksome to people that wish to have attractive, well maintained parks, but it’s not a serious problem, and it might even be tolerable as a semi-permanent solution until there are adequate housing options for people that can’t afford to rent or purchase a home in the City. But combining unregulated camping with a bicycle chop shop is clearly problematic. And allowing people to camp right next to the trail without any separation is also an issue. That is not even allowed in wilderness areas in national forests, where dispersed camping is allowed pretty much anywhere. If you camp in a non-designated campsite within 200 feet of a trail in a wilderness area, you are subject to a fine.

I understand that vulnerable populations need to have access to vehicles and places to sleep. But if you are going to sleep in your vehicle, you should be required to do so in a designated parking spot or in the public right of way. I feel like all these arguments that people that are living unhoused need to be located in areas where they have access to services go out the window when the people in question are in possession of an operable motor vehicle. If they have the ability to drive to services, they shouldn’t be allowed to sleep in parks, and it goes without saying that vehicle storage in parks and on trails should never be tolerated for a single second.

OMF’s Lucas Hillier’s HUCIRP program is part of the problem for not leveraging everything allowable within the constraints of Anderson Agreement. If anything, the AA is used as an excuse for inaction by the City Government.

My wife found a form on the City website to report camps. With their cleanup initiative we can hope.

Unfortunately, the City rarely responds to the reports. Portland is currently a “failed city”. It’s the “city that enables”.

You can always report the dump pile, then after it has been reported, re-locate it onto the lawn on the city owned property in the Eastmoreland neighborhood in the cover of darkness in license plate less trailer. By reporting the trash pile ahead of time and having the photos on file, it creates a reasonable defense that you’re not the true origin of the trash pile. Someone from city’s Bureau of Planning and Sustainability confirmed it’s not specifically against the ordinance to relocate trash in this manner.