Caught another dumb driver on video, and proceeded to curse them out. (Unsurprisingly, its a BMW) (RANT) 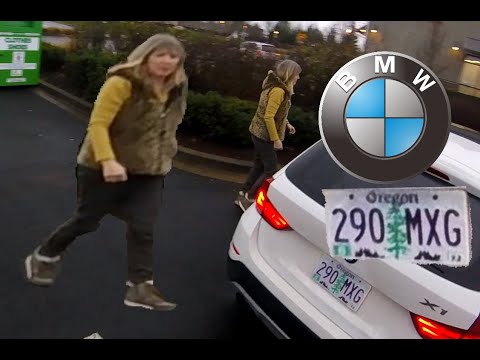 I’ve been cycling for a years off/on which means that I’d run into the occasional idiot driver, but they were very rare it seemed. I thought drivers were pretty mindful of cyclists here, from my once or twice a week rides through the suburbs and bike trails, I felt safe riding my bike.

Once I started cycling near-daily or many times a week, (been doing doordash deliveries), and taking up the road more than a fun cruise through the park, I realized just how unbelievably dangerous cycling is, and it’s mainly due to these 2 problems:

I’m seriously counting down the days until I get into an actual incident with a car, it seems very likely that it’ll happen before summer, or at least that’s how I feel. For a start, on a two-way no-bike lane road today, I got passed within a foot or so by some old ladies in an SUV. I pulled up to them at the next light and tried to yell/raise my voice through their window to inform them they were too close back there, but they ignored me. Or so I thought, because when I tapped on their window they jumped with surprise, rolled down their window, and seemed sincerely apologetic like she hadn’t even noticed what happened. This shocked me, and made me realize that some drivers literally don’t even realize they are endangering cyclists’ lives, as well as breaking the law. Up until that point, I thought all bad drivers were just aholes.

As per ORS 811.065, on a road without bike lanes, they’d have to pass me on the left with enough distance so that I wouldn’t get hit by their car if I were to fall over. Take my height (6’5), so make that about 7 feet of passing distance per the law, which I very rarely see even from the considerate drivers. Drivers need to be more informed about the law, and we need more cycling infrastructure, at the bare minimum bike lanes should be required on all roads in Portland and the Metro area.

Seriously though, how many of you have been hit by a car/how often does it happen? Rant over.

If you’re interested I think you may be able to issue a traffic citation against this person. Oregon live has a write up on the procedure . Never done it myself though, so not sure how (or if) it works.

Thanks so much for this, I’ve never heard of this before.

I’m going to the Sherwood Police Department tomorrow to attempt to issue a citizen’s citation on this with them. However, I’m stuck on what exact laws she broke.

Do you agree? Or did I miss any laws she could’ve broken? Thanks so much for this idea btw, I’d love to meet this lady in court, or watch her not show up and get a fine/retraining course regardless.

New video I will be taking to the police/courtroom hopefully.

I’d also look at ORS 811.375 Unlawful or unsignaled change of lane since she continues to make an attempt to change lanes despite being right next to you.

That sounds about 75% right, although the definitions of that one are slightly off in that she could have done the movement with reasonable safety. The wording is just playing with me. I want to be 100% confident in each law I cite her as I’m not an actual judge or police officer, so making these citations and bringing them to court on my own, I’ve got to be 100% spot on.

She had plenty of space and speed to easily and safely merge behind me legally but instead intentionally sped up and drove upon next to me, like she was trying to drive me off the road or squeeze past me. It seems more like 811.135 Careless driving rather than making a quick unsafe lane change or forgetting your blinker as in the law you cited, although I could be wrong and both laws could apply here.

Hey, were you on that TV show Portlandia? You sound very familiar to me.

I was not, thats interesting though

Could sent the video to the district attorney and ask them about possible charges.