The entire idea of getting inside of a multi thousand pound killing machine to fly down the highway at 75mph to move, often solely, your 150 lb self, is entirely insane. Cars kill 1.35 million people a year, or 3,700 deaths every day. It’s also heavily linked to obesity in the world, America especially. We also can’t forget that if cars didn’t exist, or were very limited, nearly the entire threat of global warming would be eliminated.

GM bought railroad companies and would tear up the railroad tracks in the 70’s before pushing in their own automotive infrastructure to replace it. That, along with poor lazy planning, lead America and the many countries that followed to become extremely car dependent, and its sad. Cycling is not only good for your health, but its also extremely fun and a great hobby for almost all cyclists. If more people thought about getting out of their car for once, a lot of America’s problems could be solved.

Instead of driving half a mile to the gym, before finding the closest parking spot, before running on a stationary treadmill and watching TV, they should instead invest in a decent bike, get some real outdoor time, and do something against car culture and pollution for once.

Also, don’t forget parking lots which take up 40% of the city, gas prices, car insurance, and maintenance. That’s why I plan on not buying a car in the foreseeable future. Personal health, cost, and just having a better life overall without a steel box on wheels to take me everywhere I go.

And let’s not forget the 100s of parking spaces on the street, scattered around the city, that one car owner feels entitled to. Multiply that by 1000 and you see the contention of street parking. Bonkers.

Folks in this forum are already pretty much on board with these observations — so their purpose in this format is a bit of a head-scratcher. Is this just a good old-fashioned preach-it-to-the-choir session to get some “amens” and raise seasonally depressed spirits?

If not, by way of introducing a counterpoint, I’ll offer that the first American car companies were not initially so big and that maybe one reason the idea initially resonated in the culture is because mostly the land was vast and open — a few major cities excepted.

I was ranting, there’s no choir or religion involved here. I was mostly directing this at anyone who owns a car, even if they cycle, since I plan on never getting a car in the foreseeable future and was stating my opinions on why they are an insane concept from the beginning.

If you want to make an argument out of this thats fine. However, I’m not going to reply as I don’t know much about how cars came about in America and Western Europe, but I do know that Western Europe started implementing policies to go back to cycling/walking many decades ago, while America is just starting those policies recently, which is a big factor.

Thank you FlowerCrow for speaking to the bigger issues of how cars dominate American culture and shape cities and the lives of people. Car culture imposes a power relationship of predator vs. prey on us mere humans, and that has to be addressed, again and again, in any fashion, in any forum. And thank you for not owning a car.

With 90% of the US households owning cars (and full disclosure I’m one of them) how do you intend to change their, and my, hearts and minds?
We recently got rid of one of our cars and we are down to 2. Once we hit retirement, we are looking at only having 1. We plan to travel by vehicle during our retirement.
I do walk a lot to local stores, take transit to work, and minimize trips as much as possible. But lets face it, the alternatives aren’t there. If there was high speed trains criss crossing the country I could see traveling via that method. But there isn’t.
Oh, I do have a great bike, but lets face it, the streets are a nightmare to go on anymore and the trails are a no go as well.
It’s great that you’ve decided to not have a car, but until there are viable alternatives you aren’t going to be getting much more of the population to join you.
Realistic ideas preferred.
Outlawing cars . . . not going to happen.
Tearing up freeways . . . not going to happen.
Tolls and/or congestion pricing . . . might happen.
Reconfiguring neighborhoods to be more pedestrian friendly . . . might happen if construction industry is taken out of controlling local government.
Taking away car lanes to make bike / bus lanes . . . starting to happen.
Those are just the ones that came to mind. I’m sure there are many many many other ideas out there.
Anyway, good luck with your goals.

I disagree with the blanket assessment that “the streets are a nightmare” and “the trails are a no go.”

Some are, but there’s always a viable route to find for local getting around. But granted, it helps to be the type of person who happens to enjoy route-finding.

And if there’s always a viable route to find for local getting around, then riding is always an alternative.

But agreed, it’s hard to replace a car for longer-distance travel — especially during Covid.

JayDedd,
I have a hard time seeing how one could disagree with the statement that the “trails are a nightmare”. Take a look at this photo! We need less apologists for the mayhem and more community will to fix the problem. Seriously, our trails are an embarrasment for a Platinum Bike City. I think we should be demoted to Tin. 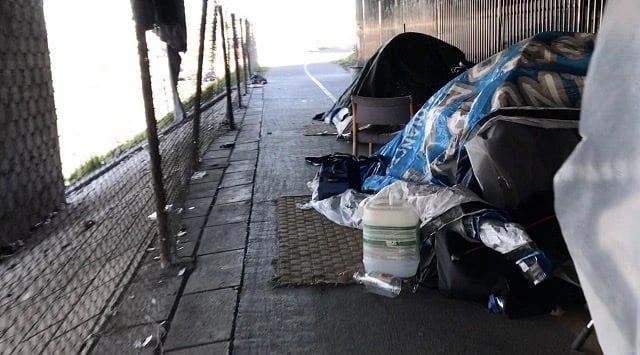 You are very sloppy, and therefore untrustworthy. No one except you wrote “trails are a nightmare.” Go back and re-read.

What was actually written: “the trails are a no go.” How I responded: “Some are.”

Do you willfully refuse to be accurate when it’s all right there for you to copy and paste, or are you just incapable?

when was this picture taken?
This is the underpass of NE Sandy blvd, on the I-205 trail and it’s been cleared for quite awhile. I was riding through there last week and it was clean.

I think city should lose transportation and homelessness related federal funding for failing to keep sidewalks in compliance with ADA Title II. There’s nothing in law that says obligations to homeless people’s rights trumps obligations to comply with ADA. It’s a matter of enforcement.

One way of encouraging self-enforcement is cutting funds for failing to comply with certain things.

@Jonathan_Maus why are these agenda posts allowed here?

It’s a forum for cyclists to discuss biking in the Portland area. Newsflash: It’s full of opinions.

Why don’t you tell me which rule this post is violating?

This is a really simplistic understanding that misses a lot of why cars became so popular in the first place. They were replacing horse-drawn carriages, while being faster and also less (locally) polluting than horses, and much cheaper and easier to own and maintain. They were inarguably an improvement in many ways.

The trouble is that horse-drawn carriages were never the primary mode of transportation before their automobile replacements. People walked and (at least in the few decades before cars dominated) rode bicycles everywhere, because walking is free outside of the cost of time, and bicycles can be made very cheaply while being much faster and requiring little extra time, energy, or money. Mass transit was the far more significant innovation of the 20th century, we just ignored it here because America has always been and is increasingly becoming a self-destructive nation.

Americans–not solely, but more than and for longer than anyone else–have built our cities as though each homeowner is landed gentry, albeit often only on quarter or half-acre lots. There are understandable reasons why this would be desirable, as owning a plot of Earth feels much more secure than depending on such contingent social relations as public housing or–even worse–living at the mercy of a landlord (this is, of course, ignoring the contingency of private property rights, on their own). To provide the land necessary for single-family housing, we’ve all had to spread out to scales and patterns of development that can only be served by cars–could only have been served by horse-drawn carriages in the past.

Much like a stand-alone home would’ve been an enormous luxury in the past, so too would’ve been the amount of non-human-powered private transportation that you see in the U.S. I don’t necessarily see this as an issue, either. Admittedly, I’ve always loved cars, and though I only drive my own infrequently, I love it, too, but that’s because it feels like a luxury. I moved to Beaverton from New Hampshire because the zoning reforms of the past two years seemed an acknowledgment by the Portland metro area of that fact, and signalled that the state was ready to change things. Then, I arrived here, and saw brand new multi-level parking garages being built next to MAX stops, and old low-density housing next to transit that ought to be redeveloped yesterday, next to the same sprawling auto-centric development that I’d left on the East Coast. There’s a lot of hypocrisy over here, even if I can all the same appreciate that people know they ought to do better. There’s still missing the realization that a single-family home with a car serving it is a luxury, and not one everyone wants, and certainly not one everyone should be forced to have.

Cars are not an insane idea, but they are absolutely unfit for the purpose of moving lots of people, and I expected a region that touts itself as “progressive” to be further along the path to the realization that they are at least not the sole viable means of transportation, and more, that developed countries show it is far from the best for people who work in service, and not industry. However, contrarily, the people in charge of deciding the physical construction of the region are those same landed gentry would’ve-beens who are still marveling at the self-propelled carriage, instead of the efficiency and humanity of high-density, transit-oriented development.

well, and let’s not get started on the carbon footprint associated with data centers and telecom that hosts things like the internet, this forum, etc.

All you’ve done is agree and support my points, as well as talk about the beginnings of cars in America. My point was that America is more car-focused than Europe and other countries.

True except for your title: " Cars are an insane idea pushed into american culture by big corporations."

That “pushed into American culture” part makes it seem like talking about origins is fair game.

Maybe you should’ve called the thread “America is more car-focused than Europe (sic) and other countries”.

Us anti-autocentrism people are up against a huge number of interlaced power structures from which people’ll poke holes in our opposition wherever they can. This is kind of a self-evident statement, but way things are in the U.S. seems–to anyone not disadvantaged by it–to be fine. If you live basically anywhere in the U.S. that isn’t NYC, and you’ve grown up being driven around by your parents, and you can afford a house and car just like they did, everything’s working just fine like it is.

It’s encumbant upon those of us who realize that it’s not to be precise in what we say. A power structure doesn’t have to defend itself; it’s already in power. It can be–as American society so often is–clumsy and careless and cruel. We, insofar as we are opposed to that clumsiness and carelessness in its pedestrian/cyclist/poor/disabled/young/elderly-hostile autocentric urban forms, have to voice our thoughts clearly.

Presenting our perspective in an extremist and fanatical way is going to inspire gut reactions that shut down the discussion.