I rode to the Portland Clinic Downtown from NE today. I went over the Broadway Bridge and continued on Broadway. As I reached the bottom of Hoytt, I had to do a little chicane that the bike lane takes, and then line myself up for the protected bike lane after Glisan … and the lane was filled with parked cars the whole way to Burnside, forcing me to thread the lane between parked cars and the plastic bollards in the buffer zone. How does PBOT screw this up so badly? How do drivers screw this up so badly?

PBOT should have made the bike lane more conspicuous with green paint and more bike only markings. Parking enforcement should be ticketing and towing those cars because they are blocking a travel lane illegally.

Drivers screw this up because – in what world do you ever park between bollards (even if they’re just plastic wands) and the curb?

As I predicted, PBOT would lay it down, dust off their hands and consider it a job well done as they pat themselves on the back as they walk away and forget about it forever.

Those things are often just a political gesture. The difference in the way calls are handled by the city says so. Calls about transient camps in vehicular lanes are considered a police matter, but generally calls about transient camps to the police about bike lanes/sidewalks are kicked back to that useless HUCIRP department. These aren’t published official policies, but you can see how pedestrians/bicyclists/mobility device user are considered as third class citizens to vehicular traffic (while illegal campers being 2nd class).

In their defense, a transient camp in the middle of a street is putting the lives of those transients in imminent danger. A similar camp in a bike lane or sidewalk is not a danger to to the campers, even though both scenarios are an inconvenience or worse to other users of the facilities. I see it as drawing the line to provoke a response at issues of imminent life safety, and that’s probably the best law enforcement feels that they can do right now.

Transient camps in bike lane and sidewalk puts non-transients at risk by causing wheelchairs, pedestrians, bicycles and such to have to detour into road, therefore I disagree it’s not a safety issue.

Sorry to hear about your unfun ride. But to answer your question - habit. Habit is how drivers screw it up. They’re used to the old way and as soon as one person parks there the old way, others follow.
It’s been like this at all the parking protected bike lanes - it takes folks time to figure out there was a change, despite all the helpful signs, markings or what-have-you.
Pro-tip - if you see this kind of bad parking, YOU can call parking patrol. They’ll come over and start ticketing or whatever (they may do warnings for the first few weeks, to give folks a chance to learn, not sure about that though). tel:503-823-5195

Call City of Portland Parking Enforcement at 503-823-5195 when enforcement is needed. They usually show up and write some tickets. It’s an automated system so be prepared to give your name, phone number, description of the location and offense. They also want license plate numbers and vehicle description of the offenders.

It seems to me that compliance is getting better… though yesterday I did have to go around a county van blocking the bike land between Couch and Burnside. I reported it to the county.
Actually, the worst encounter so far was with man yakking on his phone, standing in the middle of the bike lane on the raised bus stop between Couch and Burnside. He had his back to me and I had to yell several times before he moved out of my way. Then as soon as I passed, he stepped right back into the bike lane to continue his phone conversation. Sigh. 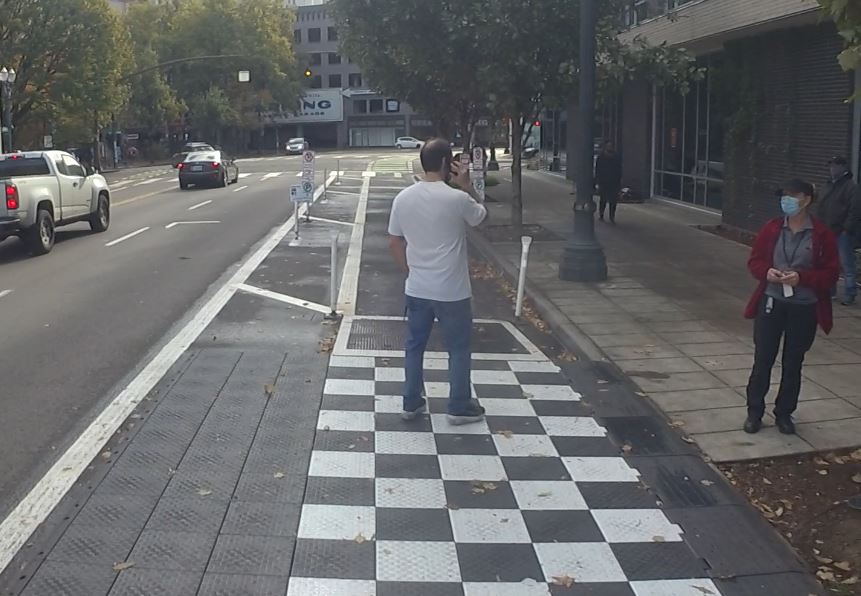 Call City of Portland Parking Enforcement at 503-823-5195 when enforcement is needed. They usually show up and write some tickets.

Not if they’re transient encampment related.

What’s with the checkered pattern anyways? That leaves room for confusion

Yeah, that should be green or have a sharrow, at least.

So, this morning I’m picking up bagels and a driver comes north on Broadway, flips a u-turn mid-block, and parks in the southbound bike lane. I brought his error to his attention, but I don’t think he took kindly to it.

Afterward, I did have a couple thoughts. If you have been used to parking on Broadway to visit businesses there, it is a little unclear as to where you can park now. 6th is no parking due to transit and many of the cross streets are…sketchy right now. It would be helpful if PBOT put signs up directing drivers to parking areas when they remove street parking in front of businesses.

Also, those wands should not be spaced far enough apart to allow a car to pull in easily. And the No Parking signs are in the wrong place; they have them in the buffer zone, which normally would indicate no parking in the right hand travel lane. They need large ones along the curb to make it clearer.