Hello everyone, I recently published a project that I’ve been working on for the past few months: An interactive map of the bikeway characters here in Portland. Still a work in progress as I discover more characters and photograph them. But I’m hoping that this can eventually become a way for the bike community to appreciate all the fun characters we have throughout the city, as well as look back on the ones that have faded away.
Anyways, I hope you all enjoy it if you decide to take a look

So happy a map like this was created specifically for Portland. I’ve decorated 2 bike lanes in the Metro area by “gay pridifying” them with spraypaint, if you’d be interested in adding them to the map. 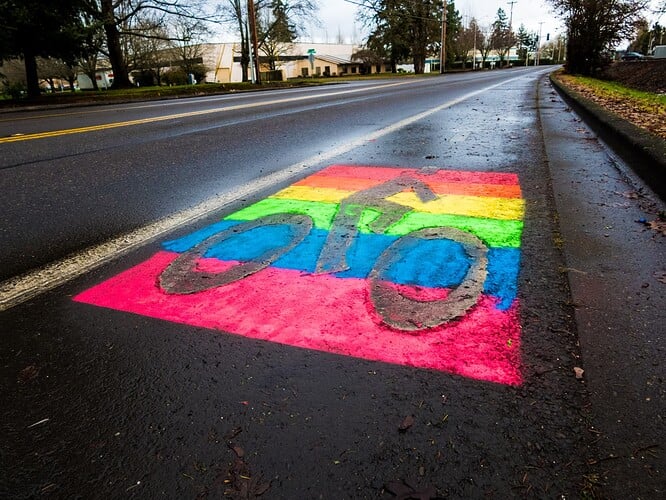 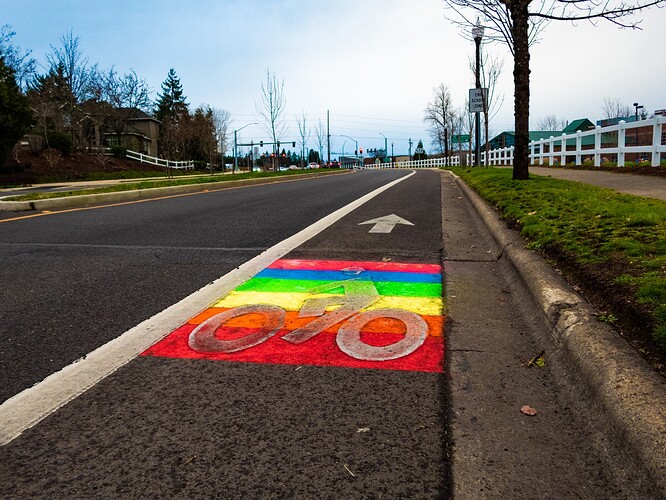 I don’t have any problem with your message, but I hope you didn’t create a slippery hazard for bicycles.

Asphalt spraypaint? Less slippery than water on the road even when it was barely wet and drying at 12 AM after just being painted?

It’s also definitely not sealed, and is probably less slippery than the bike lane marking itself which is sealed.

bryanmorris I know you’ve replied to me many times in disagreement on my own posts or whatever, but don’t be petty on completely seperate posts about things that don’t deserve arguements lol.

I was wondering the same thing. The streets are slick enough even on the areas painted by PBOT/ODOT.
I wonder what kind of run-off pollution it will cause as well. Maybe someone should go spray paint one of those fish signs (“save our streams”) you see around town next to it.

Works in Firefox. The images do not pop up in Safari.

So negative over a small little project. Why is this forum continually so toxic over minor things? It seems like everyone is out to get each other, or gets offended over small things, almost as if they actually had a secret subconscious reason to pick apart the gay bike lane spraypaint, but not say a peep about the other spraypaint in the main post., I see petty little arguments like this constantly over dumb shit, even ones directed at the owner of the site.

Asphalt spraypaint doesn’t contain the pro-grade silicone/glass materials or sealant that makes actual road paint slippery. And as for run-off “polllution”, there’s virtually none, nobody cares. Hey! Your rubber bike tire is degrading and running off into the streams you polluter!

I love it. Thanks for sharing! I hope it was a fun project.

Love seeing all the images, but I have one suggestion for the next phase (if you haven’t planned it already): It would be great to see all the images in a list. As it is now, I’m only hunting and pecking on markers on the maps where I might ride. If I saw a list of all the images where I could click on the ones that interested me the most, such that they revealed where they were on the map, then I might make a special detour to go see that particular decal or set of them.

Thanks for putting this together! I’m always delighted when I see creativity in the bike lanes… If you’re counting crosswalks in your project, there are a few cute Muppets at crosswalks around Coe Circle in Laurelhurst.

This is so great to see! Thanks for sharing. I’ve been a fan of these since I first started the site back in 2005. You are like a modern day Jim Waigand, the guy who kept a photo album of all the ones he saw back in the day. Good luck w your project and keep us posted.

So useful; thank you! I love these little treasures. Can we share images with you as we go along? I’ve got a few saved up & will check to see if they are on the map already.
Also can you add the word ‘sharrow’ to the top post? I wasn’t sure what bikeway characters are (like, I"m probably one, lol).
Thank you again for your time & energy!

Re: the bikeway characters in the map are made with thermoplastic which is impregnated with grit to enhance traction, otherwise it can be very slippery: Slippery bikeway striping on Williams Ave causes multiple crashes - BikePortland

Spray paint is thinner and wears off quickly, so in the long run it will not by slippery. But when it is fresh it might cause people to slip when it rains, especially if they have thin or hard tires.

Because of this risk, PBOT requires people to mix in grit with the paint used for street murals and intersection paintings: Apply for a Street Painting permit | Portland.gov

" Painting roadways and other public right-of-way requires specific paints with a special additive for slip resistance. This ensures they meet State slip resistance requirements, found on page 937 of the Oregon Standard Specifications for Construction 2021.”

There is an additive that you mix in with each gallon of liquid paint. Unfortunately I don’t think this is available for spray paint.

I will personally go out to some of the bike lane characters and show you that none of that traction additive has been added to many of them.

Just a follow-up to my earlier comment that it works in FF but not Safari. That is on Desktop. It works fine on mobile Safari (which is great if I want to use the map on a ride). I’m not sure why that is when both my laptop and phone are on the same Wi-Fi network. I even disabled all extensions for my desktop browser and the images still do not display. There is no error in the browser’s console either, but if the script framework is such that fails silently (e.g., jquery), then it wouldn’t throw an error anyway.

Also, do you have a way of submitting new ones you haven’t discovered yet?

Good idea, I had planned on adding something to make it easier for folks to find characters (as right now it’s kinda like those memory matching games where you flip things over haha), but I hadn’t fleshed anything out. I think your list idea will be a good solution

RE: Safari issue.
I wonder if the image URLs are being messed up on Safari, thanks for the heads up!

Thank you! It has been lots of fun! It’s got me out exploring parts of Portland that I’d never really venture to in search of new characters

I count pretty much anything as long as it’s on asphalt, I’ll have to check those out, thanks for the tip

@squareman @Michelle
I don’t have any “official way” to share images currently, I need to look into how to set something like that up, when I do I’ll be sure to make another post here on the forums. In the meantime I can share my email (ask via message) if there are any you have :).