The recently upgraded bike path on Division still has significant issues. There are sections being used as parking area. Some blocks are marked no parking and some are not. There is one block with a motorhome homeless site parked right on the path. Sections with concrete barriers followed by areas with no barriers with cars parked in the lane. We need some more clear markings as to whether parking is allowed and / or parking enforcement with heavy fines. 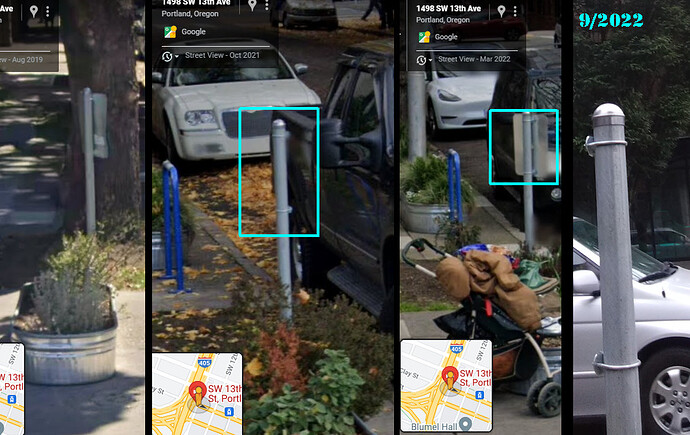 In the proximity of areas frequented by the problem population, this is of something that happens with regularity. Heavy fines, unfortunately would not work against the judgment proof population. When you report conditions like this, it can take anywhere from a week to a year for the city to give enough of a damn to fix it. In areas more populated with persons having high crime days pear year, they take longer. For example, on SE Oak St and SE 2nd, PBOT maintenance operations have yet to replace torn off parking regulatory signs reported to them many months ago.

Technically, vehicles with outstanding fines of $500 or six citations qualify for tow, but this is poorly enforced. Signs are regularly ripped off and bollards are regularly ripped out in areas plagued with demographic of people who have high number of crime-days per year (Google this phrase) and the cavalier attitude towards such behaviors by the imbeciles at the Portland Bureau of Transportation and the City Hall are allowing this to continue.

There’s many dumb reasons the City/Cops don’t ticket/arrest the campers but could one of them be that they have little to no money so there’s no $$ incentive to do so? Towing vehicles doesn’t make the tow companies any money if the owners don’t have money to get them out of the tow yard. Writing out tickets doesn’t get the courts any money collected either if the campers can’t afford that.

Trying to get blood from a stone or whatever that old saying is.

But of course the other side could ask, well if they have no money, how do they afford drugs and booze? I’m sure that’s a whole other discussion. . .

RVs are worthless because of wood and fiberglass with no value relative to the amount of space they take up. Regular cars have value in secondary market. Tow companies can lawfully sell impounded vehicles to satisfy tow/storage fees.

More reasonable approach is to install cellular based trail cameras high up on the light pole and aim it at parking control signs that experience repeated damage. If a subject is seen removing the sign and retreating to their vehicle, that gives reason to arrest them not for being houseless, but for criminal mischief and theft. If the sign was taken inside the vehicle, it gives a reason to tow the vehicle for accessory in crime, because the car was used to conceal a stolen sign. If a neighbor’s Wyze or Nest catches someone do this, those are the actions they would take in Lake Oswego.