Bike gutters, channels, stairway ramps...what are these called and why are they so poorly placed?

Hi. I’ve only been in Portland a year and am curious about the name used by the city team that ddoes placement/installation of bike gutters, channels, stairway wheel ramps, whatever they are called. My Food Not Bombs friends and I haul food. We use panniers, bucket panniers, rack crates, and kid trailers to haul food. It’s impossible to get our bikes up these “gutters” because they are usually next to a wall and only fit bikes without cargo. Since I’m new here and don’t want to reinvent the wheel, are there folks trying to work w/the city to make these gutters cargo friendly? Thank you!

I have no particular knowledge on this topic, but I would guess that placing them away from the edge would present a tripping hazard to people on foot trying to walk up and down the stairs. Only a wheelchair ramp with wide corners would be safely navigable by all users, I think.

I think if they were in the center, people walking up and down could have access to stair handrails. But I also see your point. If they were bright green gutters (eg: bike lane style) , they would be well marked.

We use panniers, bucket panniers, rack crates, and kid trailers to haul food

And there’s the problem: there are thousands of ways to haul stuff by bike, yet few ways to push a bicycle up a flight of stairs. A one-design-fits-all approach is not going to happen. Thankfully there are elevators and alternate routes for just about every staircase I can think of. What’s keeping you from making a slight detour to accommodate the particulars of your setup?

We ARE detouring but we shouldn’t have to. A bike-friendly city/future demands access for bike delivery cargo esp. as we phase out of fossil fuels.

It’s not realistic to accommodate every single minority interest. The request you’re asking for is perhaps relevant to 1/50th of 1% of population and public agencies must consider if expending public resource for something like this is reasonable.

keep in mind that it would also open up to the movement of cargo bikes by those involved in unlawful use of bike paths such as encampments and unpermitted industrial operations, as well as skateboarders grinding and such and causing nuisance to pedestrians.

This makes sense. Thank you.

This is a screenshot of a pedestrian overpass stair in Japan. Note the center of the stair is a ramp for bicycles.

We here in the US could do better, but we don’t have the political will to do so. 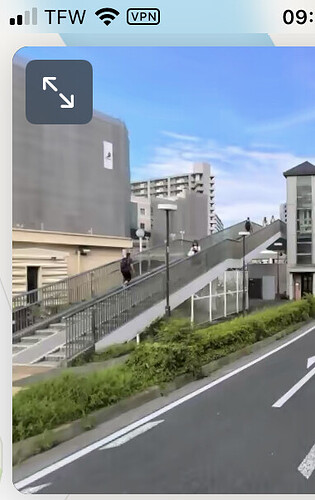 I think your critiques of the designs of these structures are valid, not just for cargo bikes with extra large loads, but for normal bikes, as well. I’ve found that my normal drop handlebars often bump up against handrails when using these things, and that even small, relatively streamlined panniers interfere with the function of these gutters. I often ride blocks out of my way instead of using them for a more direct route.

Thanks for agreeing. I wonder if anyone in the city would want to hear concerns?

Your image reflects exactly how it should be. Bikes have more space. These ramps can also be used for strollers. Handrails are left for those walking up/down stairs.
THANK YOU!

Great topic! I think they are mostly called wheel gutters. Portland Bureau of Transportation called them “bike gutters” in a statement about the recently opened Gideon Overcrossing. I think the PBOT ones are still way too narrow. If we want them to be more useful for more people and more types of bikes, I think they just need to be much wider. Check out these examples from Copenhagen to see what I mean 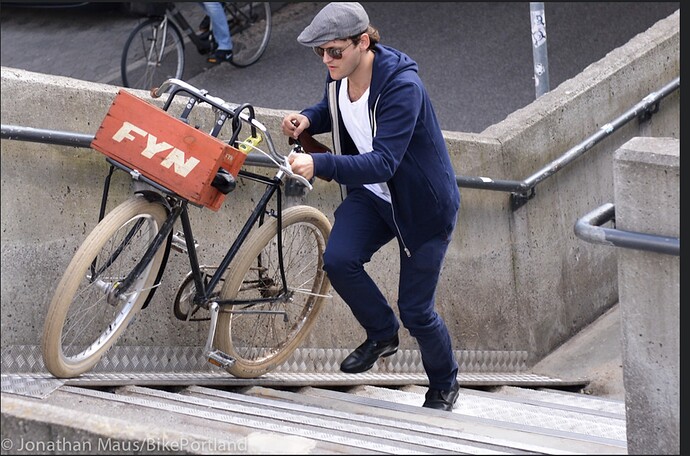 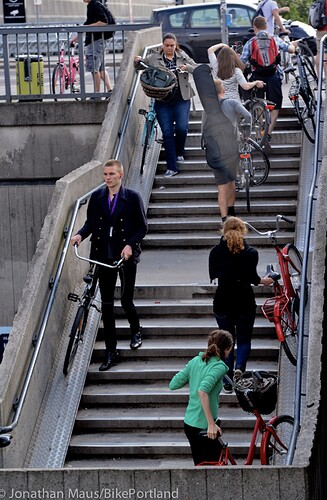 Hi. The Copenhagen ramps still wouldn’t accommodate bike trailers, bucket panniers, or crates so I vote for the Japanese style in the center of the stairwell leaving the hand rail free for those who need a handrail. I would if ODOT/Portland would rethink this and move the ones next to walls/handrails.
THANK YOU!

I wonder what would happen on the Japanese staircase if two laden cargo bikes had to pass each other going in opposite directions. Do you think there would be enough space to get by? Seems like the likelihood of that kind of interaction would be small. But maybe it would be a potential problem?

Also, the Japanese staircase appears to be relatively wide compared to the PBOT or Copenhagen example. I wonder if that type of installation requires more space?

One person would have to wait, I suppose.
A bit more space would be required for one bike in each direction but waiting is safer.
It doesn’t make sense bike gutters block handrails on both sides of a stairwell.