Bike Commuting from Portland to Beaverton? (No MAX train)

I made the switch from car to commuting by bike/MAX train to in April 2019 to get from my home in East Portland to Beaverton. Getting out of my car and onto 2 wheels was freeing - and so much more versatile for getting around. With the current pandemic situation, riding the MAX seems a poor choice but I’ve not been able to solve the linking problem from downtown over the west hills. I’m game for the mileage - but what I can’t figure out is why in a city so proud of it’s bike infrastructure is there no good, safe, protected way to bike west of downtown and into Beaverton?

I have to imagine I’m not alone in wanting a safe route (all-weather!) from Portland to Beaverton. With COVID-19 on the rise, the answer isn’t multi-modal with public transit, at least not for some time…

So my questions are:

Thanks in advance for insights into my current pandemic dilemma!

Hello. I do not have an answer for you, but I did have a similar question that I posed on this forum. I will likely be moving to Portland in the next few months and will probably live in SE and work in Hillsboro. The suggestions I received all included the Max (which I do not mind terribly but am a little apprehensive about during the pandemic). BUT, I definitely agree with you that in this city a viable bicycle highway from the East to the West should be in place. So…in short, I support and agree with your assertion and look forward to hearing others’ thoughts.

Paging @KTesh for his vast west side knowledge.

Intel has a big biking contingent of employees, as does Nike… But in my experience neither company has worked proactively to do anything about helping push for or pay for better cycling access to their campuses. This might have something to do with the lack of a west side bike advocacy group. You could connect with WashCo Bikes (nonprofit) https://washcobikes.org/ but infrastructure advocacy isn’t their top priority (they focus mostly on bike donations, bike shop, education).

As for routes, depends on where you are starting from. In general the easiest/safest way over West Hills from downtown is through Washington Park. I recommend entering from either SW Vista or Burnside/24th. Then ride through the park, connecting to Kingston and then around the Zoo and get onto the bike lane/path on Canyon Ct (adjacent Hwy 26 on north side, then it crosses to south side at Sylvan. This will get you to Cedar Hills Blvd on a protected path.

Any other west siders want to chime in?

There is the Beaverton Bicycle Advisory Committee: https://www.beavertonoregon.gov/278/Bicycle-Advisory-Committee - not sure how active they are or their current focus.

I commute from 45th and East Burnside to 185th/Walker in Beaverton. From downtown I head up the climb from the MAC up to Washington Park, then over to the Zoo to the bike lane along Hwy 26 (pretty much what Jonathan described). From there I make my way over to Walker Rd. I feel pretty safe riding in Beaverton these days, despite the higher speeds on Walker. In fact, I feel the tables have turned and the burbs feel safer than Portland. Heading back to Portland I often bypass the Zoo and just bomb down Hwy 26 into downtown. It shaves about 10 minutes off my ride time.

I usually bike to my dentist and other places in Beaverton from the Sellwood area, so rather than up through Washington Park and Hwy. 26 path (which is a good route), I take the Sellwood Bridge and then climb up either through River View Cemetery to Terwilliger or take Taylors Ferry to Laview/Corbett/Brier. Then from Burlingame, I usually tough it out for a mile along Barbur to Multnomah. That gets me to the Fanno Creek Trail in Garden Home. At 92nd I jog across Scholls Ferry to Elm, which leads through the neighborhood (with some turns) to a path connecting to 5th St., which gets you right into Beaverton. Google Maps shows this route. It’s not a bad ride. Takes about an hour for me to get to Murray Rd. at Hwy 26 (dentist) and then it’s a bit faster coming back.

Any other west siders want to chime in?

When I did that commute some years back, I took MAX a lot. When I didn’t, I was gutsy enough to just take Burnside/Barnes. I wouldn’t really recommend that to anybody else, so this isn’t that helpful of an answer. As Jonathan already mentioned, Vista is the other common route I hear used.

Given that MAX was a mostly-adequate solution to this problem until recently, I don’t imagine there’s been much perceived need for hamiramani’s bike highway.

I’d need to sit down with a map and plot my old route, but basically, I would use the Hwy 26 paralleling bike path and bomb down into Goose Hollow or go through the zoo. I wouldn’t recommend using BH Highway, nor TV Highway as I don’t like all the traffic coming from all the driveways that enter and exit those routes, especially on the downhill sections.

For now, that’s what I’ll recommend, as it’s almost midnight here in China, and I had a long day, and will have another tomorrow.

I enjoy riding onto SW Multnomah Blvd from either Barbur or the the backtrails to or side streets to Capitol Hill Road. from terwillger at Barbur, go west [towards beaverton] on Barbur to SW Custer Street to then take a sharp left to ride south on SW 17th Drive to go west onto SW Moss Street to stop at SW Capitol Hill Road (capitol lacks bike lanes and only has floating sidewalks) to then either ride through the property of West Hills Christian School in order to get to the far southwest corner of that school property (they let people use their property except where locked fences are) so then go onto SW 25th Ave to SW Multnomah Blvd to get to SW Maplewood Road and then take the side streets and trails to get to Oleson at Peyton Road and then ride to Oleson Road, go north on Oleson to SW Vermont Street and go west on Vermont to the Beaverton school district school of Montclair Elementary to go to their grass field to get to the open gate to the public platted right-of-way trail to “get back on Vermont” to get to SW Nicol Road, then go north on Nicol to SW Scholls Ferry Road, where you have several options:

p.s. the Highway 26 multi-use path is nice but the elevation is tough on a day with a lot of high heat because ODOT refuses to plant more trees on the trail on the West Slope side of the freeway (south side)

For my favorite route, I prefer riding on Barbur from downtown, but then turn right on SW 4th Street and go to where it meets SW Woods Street, carry the bike or walk with it on the Portland Parks trail on Incense Cedar steps to get to SW Terwillger Blvd, then cross the street and ride to SW Capitol Highway to get to SW Beaverton-Hillsdale Highway which has had some bicycle and pedestrian improvements on Portland’s side (east of 65th Ave in recent years; ODOT owns BH to the west of 65th). Eric shows a lot of bike riding in southwest on twitter: BH is here by 30th Ave: https://twitter.com/enobacon/status/1279546554970337280

Once on BH at 65th, I ride to the traffic light at SW Oleson Road, walk across BH to get to the sidewalk by Sesame Donuts and then ride south on SW Dogwood Lane to then go turn right on SW Westgate Way until getting to SW Nicol Road, and then I walk up that somewhat steep hill. The embedded rubber light things on Nicol at Scholls do detect a bicycle and switch the traffic lights.

If you provide rough cross streets I’d be happy to suggest a route with ridewithgps. Most suggestions on this thread are good starts, the one place I didn’t see mentioned is 5th st in Beaverton is a pretty good corridor. You can access on backstreets and a signed easement in Raleigh Hills, roughly here; https://goo.gl/maps/NPehnU8FN4xZUH689

During non-school hours, you can cut through Montclair./ Oregon Episcopal Schools off Oleson Rd to Nichol Rd and this is a good connector from the Bikeways in SW Portland through Hayhurst towards 5th street in Beaverton. This is the way I would likely ride if the destination is downtown Beaverton and I was commuting at higher traffic times (9-5 work schedule): 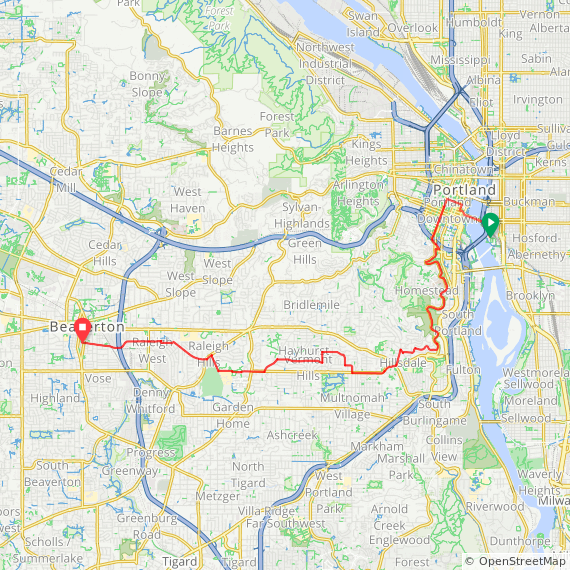 Thanks for this! I’m aiming slightly further north than the attached route (158th & Walker - ish) so I am eyeing the highway 26 parallel path routes.

One could combine TriMet with that bike ride. I have taken bus 58 from Beaverton to Sylvan many times to get to SW Scholls Ferry Road and the bike routes right by Sylvan. That bus goes on SW Canyon Road to Sylvan and then Highway 26 to Jefferson Street to downtown. Not many people are taking bus 58 and I think some of it has to do with the shift in business on Canyon Road to auto row. The grocery stores and restaurants, and family-friendly businesses have left over the past two or three decades on and near Canyon Road in the West Slope neighborhood. However, the Metro ballot this fall would allocate money and possibly a road diet to Canyon Road between about SW 87th Ave to where the freeway on ramps start / Canyon ends. A road diet would be fantastic because it would allow riding without holding onto the brakes as on SW Canyon Drive when riding a bike downhill.