Arguably, a drive-up vaccination site in Portland might be legally required to serve people on foot or on bicycle as well: It's now a Portland city code violation to deny "drive-thru" service to bicycle users - BikePortland.org

I am curious if anyone here has done fast food drive-thru on a bicycle? I haven’t done it but I have been tempted.

Sure, and also banking, since the 1970’s. Not very often, but in several towns in Washington as well as in Portland. I’ve been turned down maybe twice that I vaguely recall. The tunnel at Muchas Gracias is creepy, but it had no other traffic when I went there late at night.

The OHSU Expo Center prioritizes cyclist and walk ups through their drive throughs. Just did it today. They were all just … I can’t praise them enough. So kind. Every single person - and delighted to see a bike.

just - if anyone sees this now for their booster or anything like that. 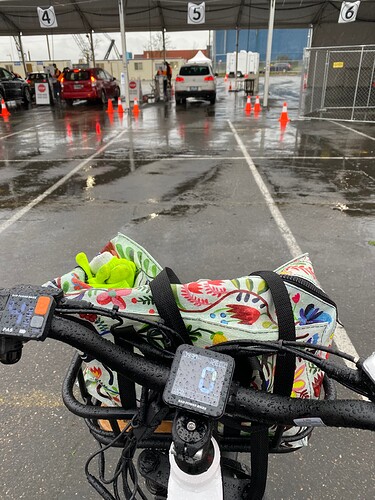 Looks like you opted for a pretty serious e-bike. Is it a cargo bike as well?
Nice!