An SOS to Portlanders

The trolls that seem to have a lot of free time for this place, have a stick up their big toe about the progressiveness of Portland; that it is the reason for the mess most Portlanders find ourselves.
But they don’t really live here, and more importantly they don’t have any solutions, other than the“round them up/ lock them up” mantra typed from their suburban enclaves.
When asked “what then?” they don’t have a clue.
What to do?
Maybe it’s about PARTICIPATION in the community and losing the ass-jackery. (?) 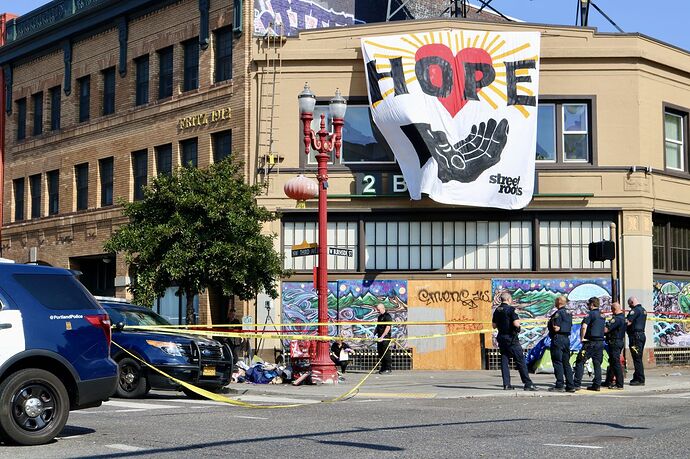 Opinion: An SOS to Portlanders from a neighborhood abandoned

Old Town is struggling, not only due to the lack of a strategy for helping those who are homeless, but also from the empty offices and empty storefronts, a decline in traffic from tourists and locals and a short-staffed police force, writes Jessie...

I work downtown and have seen some of the things that the author of the article has seen but I don’t agree with some of the “solutions.”

Until quality people are elected then it’s not going to change.

There is enough blame to go around. But I don’t see this mess as being on any political ideation.
If Frank Ivancie was still in charge, I think the problems would be the same.

If you are referring to ‘existing laws’ for the homeless, they are mostly a fine.
The sit-lie law was ruled unconstitutional in 2009 by the U.S. district court.
The decriminalization of small amounts of drugs was passed in 2020 in a STATE wide election with over 58% of the vote.
As opined by the author, the criminals and the druggies have filled the void of the downtown vacancy. Existing laws for crime behavior seems to handcuff the Cops with the “not enough Police” excuse.

Housing, AFFORDABLE housing shouldn’t be a contradiction in terms.
If Jordan Schnitzer can give Rene’ Gonzalez an amazing deal on rent, why can’t he do that to anyone else?
Real Estate greed is what the market dictates?

Why is this being posted for discussion on BikePortland.org!? Seems out of place.

Maybe homelessness is everyone’s problem?
Afterall if we let the politicians and non-profits dictate what their “solution” is, then it’ll never be solved, and bike paths will continue to be blocked.

I bet Maus is one of those progressives having a melt down over Twitter. At least his heavy censorship is alive and well here.

You sure love making constant comments about the creator of this site rather than bringing your own opinions to the table.

You should submit your own thoughts on him to the feedback section of the forms, it’s starting to get annoying

Hmmmmmmmmmmmm…:
Troll:
A person who posts or makes inflammatory, insincere, digressive, extraneous, or off-topic messages online, or in real life, with the intent of provoking others into displaying emotional responses, or manipulating others’ perception.
Yep

Another definition of Troll that I go by are people that are:

Well the lawlessness and enabling of out of control homelessness in Portland definitely has negatively impacted bike riding in Portland so it seems appropriate to discuss here. Have you been to the I-205 MUP recently? Scary and disgusting.

Yeah but this happens everywhere. ; )

Very funny. Glad I know this is sarcasm