On May 11, this blog reported that the long standing bike chop shop and camp that occupied a full block of SE alder and 30th had been cleared. I was walking in the neighborhood yesterday afternoon, and I saw signs that bike parts were again being accumulated at a camp. It appears that the camp has simply been displaced two blocks to the east at the corner of 32nd. 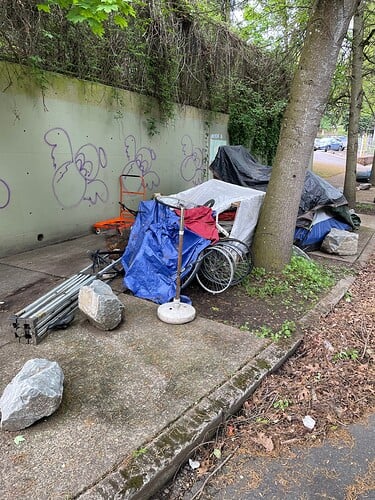 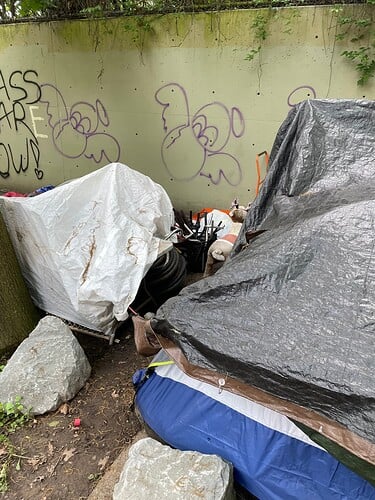 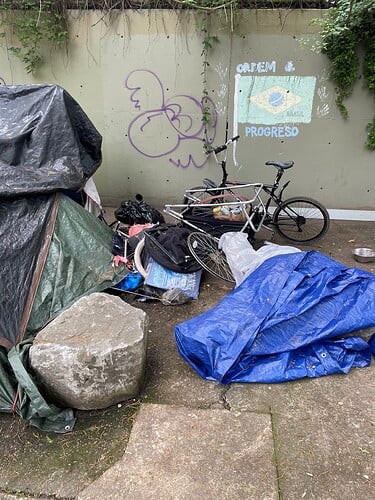 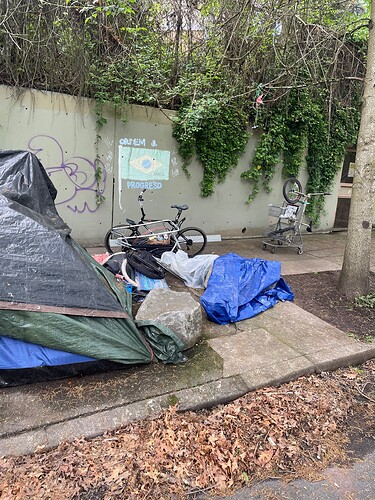 I just joined the forum to get a little more engaged in the cycling community and learn about cycling in Portland.

Is this the kind of thing that flies here? Baseless accusations of criminality against the most vulnerable members of our community are just cool and normal?

If so, I’ll happily dip, let you folks do whatever this is and tell people to keep far away from BikePortland, but wow this is gross. 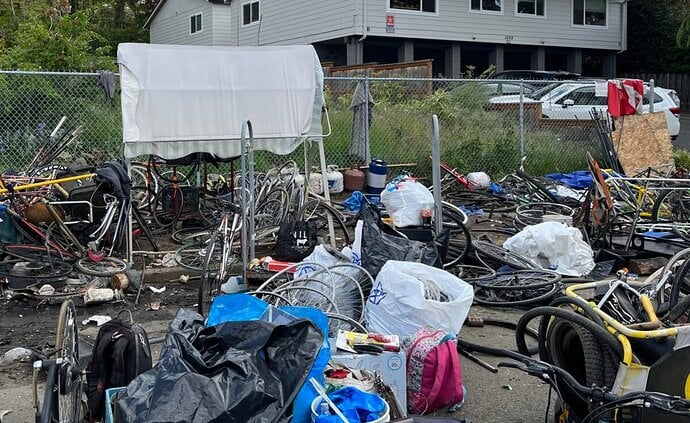 image1200×737 256 KB
Baseless? What did I write that’s baseless? I said it appears there is a bike chop shop at SE 32 and alder. This assertion is based on the fact that there are piles of bike parts that are partially concealed by tarps (clearly visible in the photos I uploaded). This was exactly what the camp that was previously located a couple of blocks away looked like before the camp was swept a couple of weeks ago. The only difference was that the previous camp was allowed to persist for more than a year, and the pile of bike parts was allowed to grow much larger. I make no claims about the origins of the bike parts. I have no idea where they came from, and I make no accusations. The only mention of criminality came in your response to my post. But it’s undeniable that there are a number of bicycles in various states of disassembly.
5 Likes
bryanrmorris May 21, 2022, 1:10am #4

You’ll find that a number of us here are fed up with the drug addicted criminals destroying our communities and the naive people who enable them.

A chop shop is a place where stolen vehicles are taken apart for scrap or to avoid law enforcement. There’s no other commonly used definition. You took a picture of a place where people live and implied there was criminal activity there. It’s really hard for me to believe you’re acting in good faith by saying I’m the one bringing criminality into the conversation.

Looking around a bit, a lot users of this forum seem to be very confused about what challenges we actually face as cyclists in Portland. If you think that you and your homeless neighbors are on opposite sides of the fight for safer, more bikeable streets then you aren’t going to achieve much.

I know nothing about the views of the person that is stockpiling bike parts on alder regarding bicycle safety. All I know is that they are effectively preventing all other people from utilizing a piece of public pedestrian infrastructure. I would think that a potential ally in the fight for safer streets would try to avoid making it more difficult for others to get around by foot. If we allow our sidewalks and bike infrastructure to be monopolized by a handful of individuals, it’s pretty hard to make the case that non-auto forms of transportation are viable alternatives.

Is this a vulnerable person who is in a difficult life situation? Most likely, yes. But the compassionate thing to do is to get them off the street. Allowing them to live semi permanently on a public sidewalk isn’t doing them any favors.

The issue is people should not be living there. It is inhumane what Portland is doing by enabling and allowing street camping. Shelter needs to be offered and no camping laws need to be strictly enforced. That is the compassionate thing to do. People in camps are getting raped and shot and mugged and criminals are living in them and preying on neighborhoods. It needs to end.

Assuming that you aren’t just here to troll, take a look at the Springwater trail conditions thread. Leaving broken glass on a MUP which cause flats isn’t doing anything to promote cycling. That naturally leads to the conclusion that, as you put it, “… you and your homeless neighbors are on opposite sides of the fight for safer, more bikeable streets…”

Thanks seethe. A word of pragmatic wisdom on a bikeportland forum. Amazing. I’m sure Jonathan will remove that post ASAP. LOL.

For example, maintenance negligence that do not severely impact fully able bodied people such as unacceptably impaired sidewalk clearance. Under ADA, 36 inches of clearance is required, but Portland Bureau of Transportation rarely enforces this. Despite the law allowing forced removal of unlawful campers when they’re given a place to stay, this is seldom executed.

Chopwatch, you may have an idea there.

The City of Portland has been sued for violating the ADA for not having compliant sidewalk ramps. So has ODOT. See, for example, News Release: Major milestone reached in making Portland's streets and sidewalks more accessible | News | The City of Portland, Oregon and Association of Oregon Centers for Independent Living v. Oregon Department of Transportation — Disability Rights Oregon

Both agencies settled and said they would fix the problem.

Some homeless are disabled, so DRO may decide that they can’t file that lawsuit. Maybe People for Portland could? In addition to ADA violations, maybe P4P could also sue over Clean Water Act violations.

Setha, That’s a great idea. Although it seems the city of Portland Disability Program would be concerned about blocked and poorly maintained sidewalks they seem to do nothing about the issue.The city also has a multitude of ADA coordinators but again they seem to have zero concerns. That’s the price for living in a failed city I guess. Lots of city employees (still mostly working from home) and taxes but not much is done. 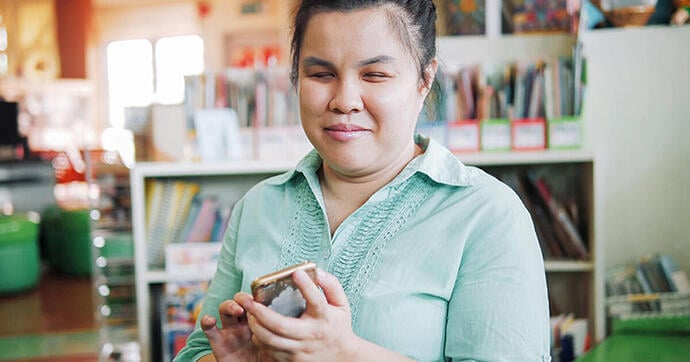 We build City government's capacity to meaningfully engage with disability communities and support disabled Portlanders to engage with government. To request translation, interpretation, modifications, accommodations, or other auxiliary aids or...

Office of Equity and Human Rights 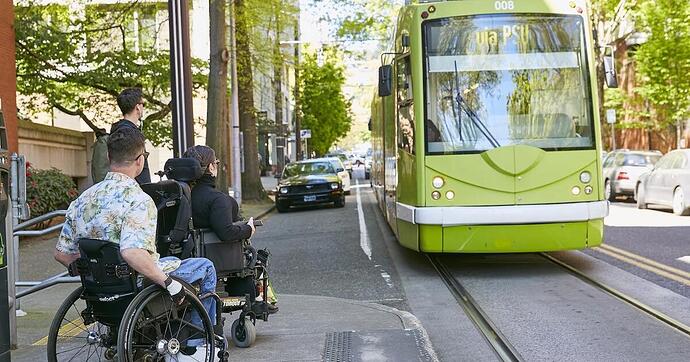 On July 21, 2021, Portland City Council adopted the ADA Title II Public Right-of-Way Transition Plan. The Plan provides a framework for continuous improvement of the public right-of-way and related PBOT programs to bring them into compliance with the...

I contacted P4P through their web page. I haven’t heard back.

Meanwhile I’m starting to wonder what happened to Jonathan. Here’s another article angry that a boring old sidewalk was cleared of tents & trash… and improved with additional bike parking.

Downtown property owner installs dozens of bike racks on sidewalk without a...

A major installation of what appears to be hostile infrastructure has popped up on public on NW Broadway in downtown Portland. Someone has erected over two dozen staple bike racks Read More »

Is BikePortland pro-bike? Pro-pedestrian? It seems like the aim of this blog is to perpetuate and expand the takeover of our public infrastructure by private parties who aim to abuse it… and deny access for others.

It’s a change here for sure when you can say the C word.
Another problem is the excess availability of Narcan, excessive calls to 911, and over-prioritization of calls about illegal drug related overdoses. We got to re-criminalized drug possession crime and hold the calling party still accountable for frequenting a place where controlled substances are used to discourage 911 calls about overdoses.

And yesterday, just a block from the newly installed bike racks:

One person injured in broad daylight stabbing in downtown Portland

One person is hurt after a broad daylight stabbing in downtown Portland.

People have become very radicalized on both the left and the right in the USA. Here in Portland many Democrats have become extremists, concerned more about the purity of their ideology versus pragmatic common sense solutions. These are the types who think it is compassionate for homeless to be able to block public sidewalks and defecate in public places. Unfortunately they are enablers of cruelty. 43% of Portland voters felt that way at the recent election. We’ll see what happens in November.

snook,
Do you live in Portland? You don’t seem to grasp the impact of what the cruel and inhumane enabling of unsanctioned street camping has done to traumatize homeless individuals and negatively impact our neighborhoods and ability to safely use public infrastructure like the I-205 bike path (MUP).

I went on a road trip in Western Oregon this weekend and it was utterly amazing how once I left Portland, I no longer saw the heaps of garbage or tents all over the sidewalks. It really was a stark contrast to not see any more Wheelervilles or Kafourytowns strewn about the City of Portland. (for those of you not up on your depression era history look up Hoovervilles for what I now name the encampments strewn about Portland)