Advice on Biking on Audrey Lane off SW Montgomery

City of Portland is proposing a bike route for bikes to get between SW Montgomery and Greenway or Talbot…proposed route (heading away from Portland) on Montgomery just past Isabel would be a left turn on Audrey Lane (really a one lane alley with 5 blind driveways), at top of hill, cross sidewalk turning left into a green zone that is two-way bikes for approx 50 yards (with oncoming traffic facing you without any ballards to protect bikes) to new crosswalk where you’d turn right to connect to corner of Talbot then right again to crosswalk to reach the corner of Greenway. This is mapped out in PBOT RP026 if you want to look closer. We’ve been told a bike group thinks this is a good idea but cannot find anyone to tell us which group. Just asking if any of you would use Audrey to connect from Montgomery to Greenway. thanks for your comments

I’ve never ridden through here, so take this for what it’s worth (i.e. not much). I street-viewed it, and with all the overhanging brush, zero visibility for cyclists or cross-traffic, and the way Audrey spits out right at the end of a long intersection – where cars are at maximum acceleration and probably paying little attention, having figured they’re clear now – it makes me a little nervous. The street view shot has it timed perfectly to show the issue: 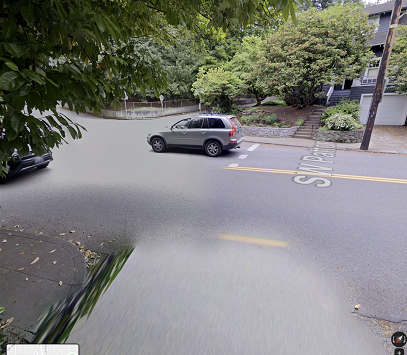 Just following Montgomery all the way to Patton has no stop for cross-traffic, but the sight lines are sure better: 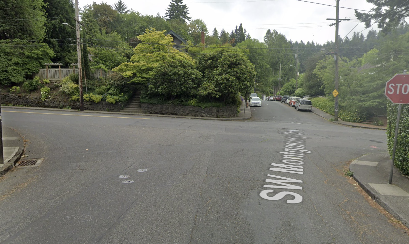 Could the group be that of SWNI’s neighborhood association of SWHRL?