Accosted by someone on a bike in Downtown Portland

Hi, Folks. I’m a longtime cyclist from pdx but new to the bikeportland forums and wanted to share an experience I had in Downtown Portland on Sunday, 5/8/22 at about 6 pm.

I was riding southbound on the new Naito dedicated bike lane at about the Morrison Bridge, when I was approached by a man on a bike riding behind me who was challenging me to try to keep up with him and bragging about how much faster he was. He seemed rather unstable mentally. Not wanting anything to do with they guy, I took a hard left into Waterfront park and continued south, only to be re-approached by the guy around the Salmon Street fountains when he yelled “nice try asshole!!” to indicate my attempt to get away from him was unsuccessful. He continued to follow me and yell at me, bragging how he was in much better shape and it was “pathetic” that someone my age couldn’t keep up with a 57 year old like him. Several times I told him to stop following me and to leave me alone, but he continued to follow me and yell at me. I made it all the way to the South Waterfront where he continued to insult my conditioning (kind of a joke, really, as I would never trade my health for his). When I approached Cha Cha Cha along Moody, just under the west side of the Ross Island Bridge, I thought it would be in my best interest to jump up on their patio where there was a crowd, and hope he would go by. Unfortunately, that wasn’t the case. He stopped his bike and approached me on the patio. I repeatedly told him I wanted nothing to do with him and to leave me alone, but he persisted in harassing me. When he finally pulled out some sort of baton is when I went inside to the restaurant and called the police. He hung out for a few minutes, but unfortunately left before the police arrived. I did get a few pictures of the guy, though, and wanted to post them here to see if any folks in the bikeportland community have encountered this guy. My guess is I am not the first person that’s been accosted by this guy. Any feedback about this guy would be much appreciated, as I don’t think I’ve ever been so violent threatened by a stranger in my life. Really appreciate it. Thank you! 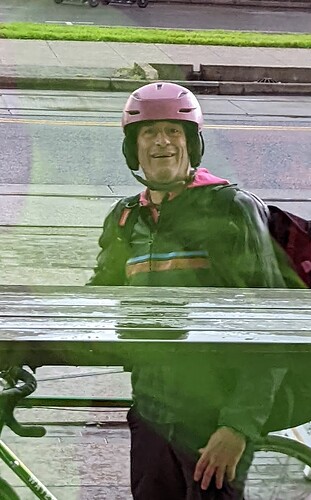 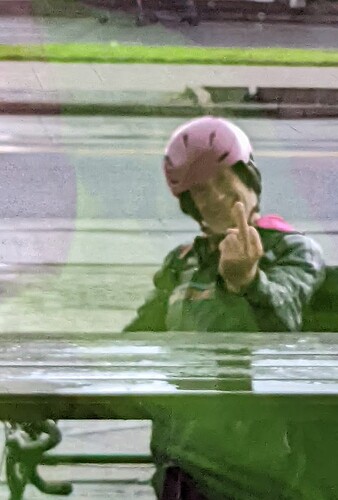 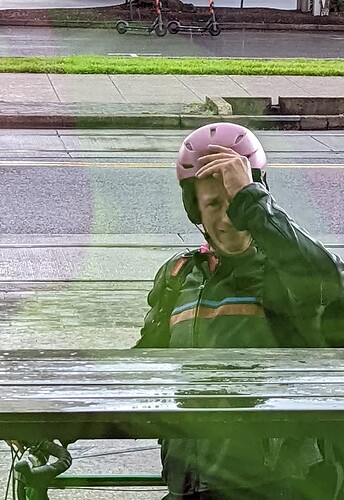 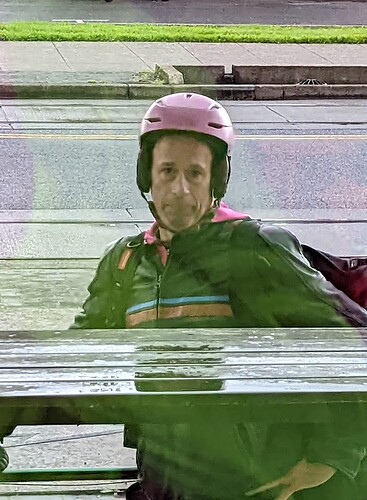 That sounds like a bizarre and scary encounter. Good to hear to you were able to get out of the situation without being physically attcked.

That’s a strange collection of elements that guy has going on. A very expensive Waterford bicycle. A leather motorcycle jacket. A ski helmet. Aforementioned collapsible baton…

I’m sorry that happened to you. Apparently being a dangerous nut job doesn’t hinder one’s ability to ride a bike.

What a methy situation

Dang that sounds really scary. Thanks for sharing this here. I agree you’re probably not the first person he has done this to. Hopefully he gets some help or is dealt with so this doesn’t happen again.

I think I may have crossed paths with this guy a few years ago - is that a food delivery service backpack? I interacted with someone behaving very similarly (picking “bike fights” with myself and someone else unassociated with me simultaneously, overtaking with about 1 inch to spare etc, then hanging on our back wheels) whilst heading south on the west bank of the Willamette around Willamette Park. After some colorful language he eventually got bored (and I suspect went off to hassle the other guy - sorry, other guy!) when I started ignoring him and rode pretty slowly. If I recall correctly, the guy in my case had a Caviar food delivery service backpack. Highly unpleasant, whether or not it was the same guy.

Man, that sounds awful too! I didn’t get a super good look at his bag, other than it seemed to be more of a messenger style bag with a single strap. I’d hate to have that guy deliver my food!!

Thanks for the insight, I wonder if it was the same person - the area you mention isn’t too far away from where he was harassing me and the MO sounds similar.

Nah, this is Portland. Nothing will happen and we all know it. Platitudes is all we can offer each other in this failed city.

So sorry. I’ve started carrying pepper spray whenever I’m riding around town. I’ve pulled it out once when accosted by an unhinged motorist but fortunately have never had to use it. Get a medium sized can. Don’t want to run out if you need it. If I had more time I’d get firearms training and carry but wouldn’t want to do that without careful preparation. Thanks for posting and sorry to hear about your experience.