There is a considerable number of dismantled bicycle tires, illegally parked motorcycle (no license plate) on the west side of SE Water Ave where it crosses SE Morrison St. At least 30 bike wheels on a rack.

A number of 3/4" x 1/4" syringe caps (they are “PBOT orange” colored) were also noted in the immediate area. These caps are used to cap off the needle and the plunger of syringes sold as “diabetic insulin syringes”.

Update: On 8/25, Rapid Response Bioclean was clearing the site. Rapid Response is a government contractor who performs encampment cleanup for the City of Portland and Oregon Department of Transportation whose processes are coordinated through the (Office of Management and Finance) OMF-HUCIRP. The bicycle operations simply moved north one block. 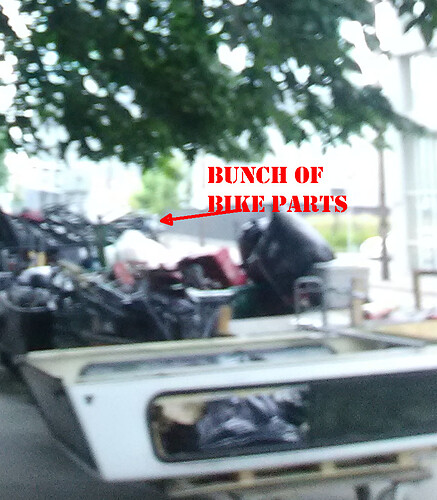 It is now at https://goo.gl/maps/g3va4FRzTgha8DoS7

Yeah but as we’ve learned on BikePortland, this is absolutely no indicator of criminal activity.

I am only saying the facts I have observed. Where a motorcycle is parked is Area parking permit zone G regulated parking area and the motorcycle has been there for days and it does not have a permit per PBOT’s database. I am also saying that PDX PBOT TSUP does not show any record of sidewalk/lane closure, so I can say that it is unlawful event and business property storage activity without proper PBOT permit. Presumption of business storage is made, because 30 bicycle wheels is not a reasonable quantity of bike wheels in disrepairs to be kept in a household.