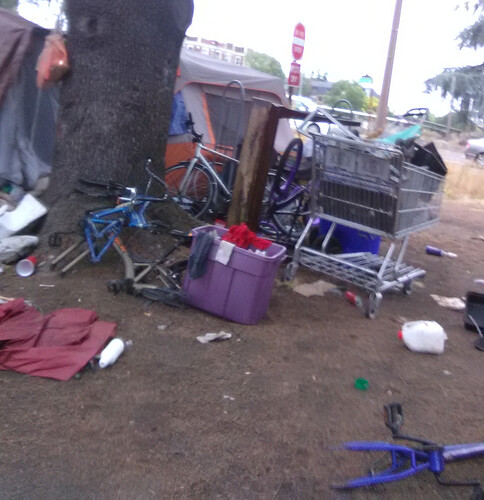 That looks as legit as any bike shop I’ve ever seen. Note the obviously stolen shopping cart.

Note the obviously stolen everything.
I’ve seen something similar near Dallas this weekend(went to see my friends, did some good ol’ BBQ and went to the gun range: one of my friends got his hands on a proper replica of AK 47 from AK-47 Rifles - GritrSports.com and wanted to test it. That thing is a beast on recoil, ngl).

I am not going to say I disagree with your speculation. I don’t voice such speculation for a good reason. The forum administrator greatly frowns upon it. Thanks for your understanding with having to read rather confusing strangely phrasing at times when I post on unauthorized bicycle assembly/disassembly activities being done on property without the owner’s consent.

I think it’s this kind of scenario this site and many sites want to avoid.

Someone posts a picture of what looks like illegal activity. People see the picture and decide to take the law into their own hands. Violence ensues and the person is injured. Later it turns out the activity wasn’t illegal.
So, if the person decides to sue, who’s responsible for the violence? The vigilantes? The person who posted the picture that “incited” the vigilantes? Or the owner of the site? Or all?

It’s a tough call but if I owned a site, I would error on the side of innocent until proven guilty in a court of law.

Just something to ponder. . .

Since there are no other public websites (NextDoor is not really public), I think it’s good to just keep a good up-to-date tabs on bicycle dismantling activities, but expressed without making assumptions.

It’s also important to not make assumptions that these are “homeless camps” setup for the purpose of means of “survival” as assumed by dolts at City of Portland, Office of Management & Finance, HUCIRP.

As of 10/19/22, there are still major parts of incomplete bikes on the Oregon Department of Transportation easement on SW 13th along I-405, between SW Market & SW Montgomery.