The crime wave that has been allowed to envelop Portland starts 2023 with a car thief dying in an automobile crash. Lawless Portland set homicide and auto theft records for the second year running. Meanwhile the rest of the country has had a decline in homicides.

“People would assume something on I-84 or something on I-5, but when you say it’s a dead-end neighborhood and that there was a fatal crash that hurts a lot,” said Reynolds, who said he’s considering moving out of Portland because of the crash and increased crime in the area. “It seems that people just don’t care.”

Don’t miss the laughable comment from PBOT’s Hannah Schafer trying to say the possibility of local control of speed limits will help rein in traffic violence in Portland. If there is ZERO enforcement of our laws, why would it help to lower speed limits Ms. Schafer? Hopefully with Hardesty in the rear view mirror a touch of common sense will return to PBOT. 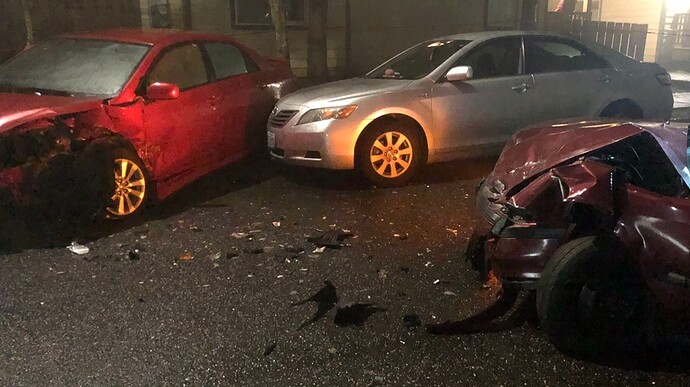 Portland police responded Sunday to the first fatal car crash of 2023 in the Powellhurst-Gilbert neighborhood.

The accidental perishing of the car thief without injuries to innocent people is something to be celebrated. Had he lived, he’d be out the same day committing more crime or he’d get medical care that costs tax payers a lot of money, and giving him another chance to cause injury accidents.

The only victims are the owners of several vehicles that were destroyed in this incident.

The $113k/yr salary (from public information) PBOT mouthpiece clearly ignored the fact taking a car that doesn’t belong to you or should have known you don’t have permission from the real owner to drive is already illegal. The law that makes those things illegal didn’t keep this from happening.